A New Front Door – and New Connections – for Sydney’s CBD 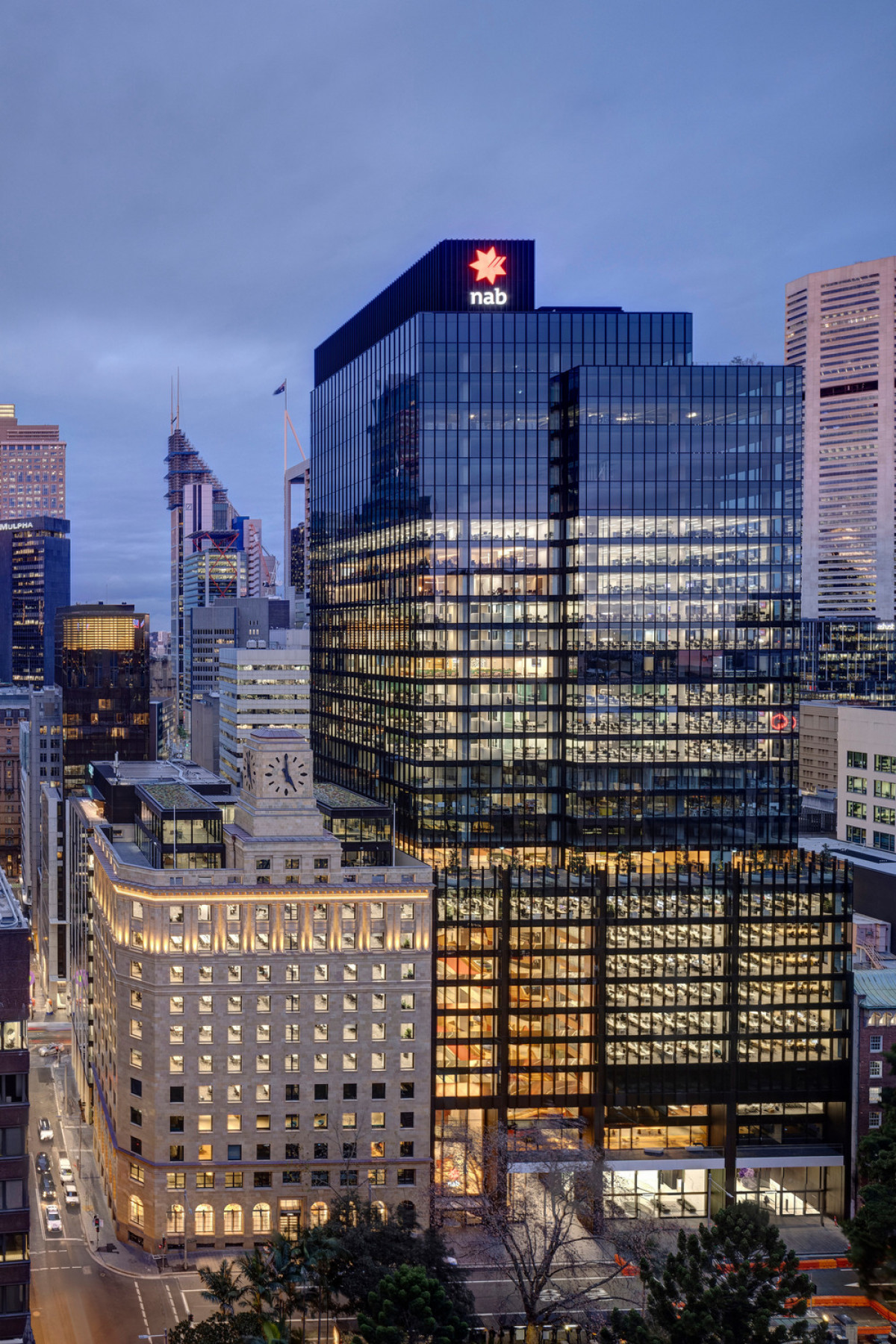 Brookfield Place Sydney, designed for Brookfield Properties by Make Architects with Architectus as Executive Architect, is a mixed-use scheme which includes the revitalisation of the pedestrian Transit Hall on George Street for Wynyard Station. The project demonstrates the true benefits and power of urban densification. Alongside 75,000m2 of premium office and retail space, it comprises upgraded multimodal transport links, new and renewed public connections that prioritise the pedestrian, and two restored and fully-integrated heritage buildings.

The complex project has united four separate sites including the former Menzies Hotel, Thakral House, and the retained Shell House and Beneficial House, assembling them into one reinvigorated block that rises out of the reconfigured transit hall of Wynyard Station. Our contemporary civic design reimagines the ground plane, making public space the focus, with a strong understanding of how people move around the city. 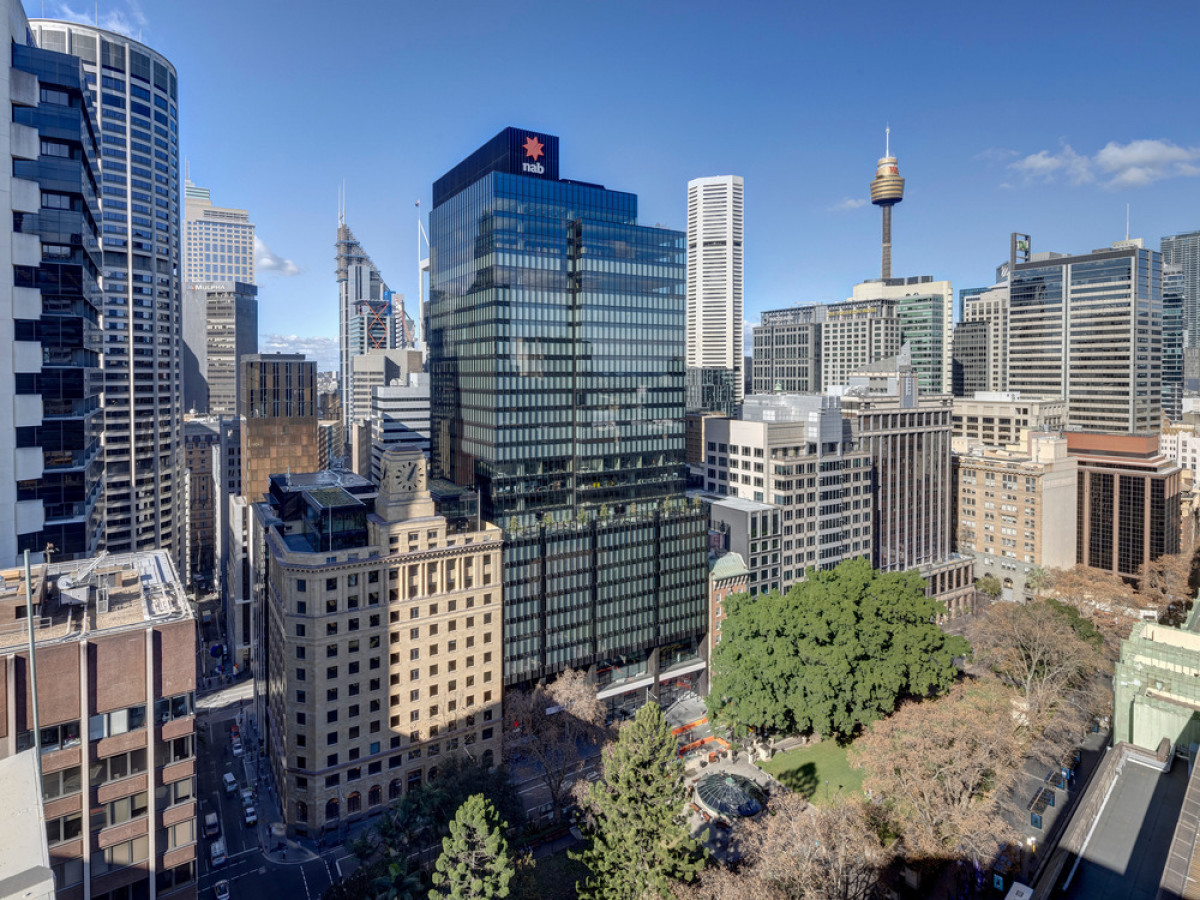 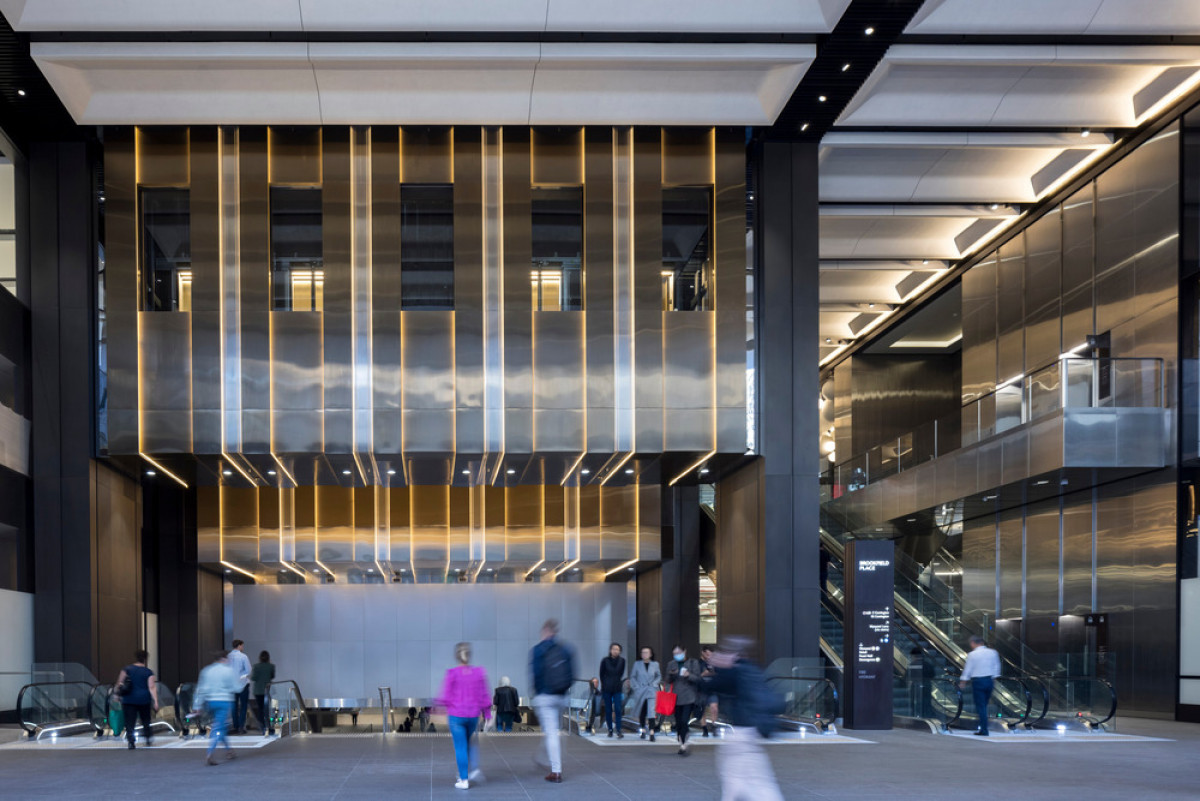 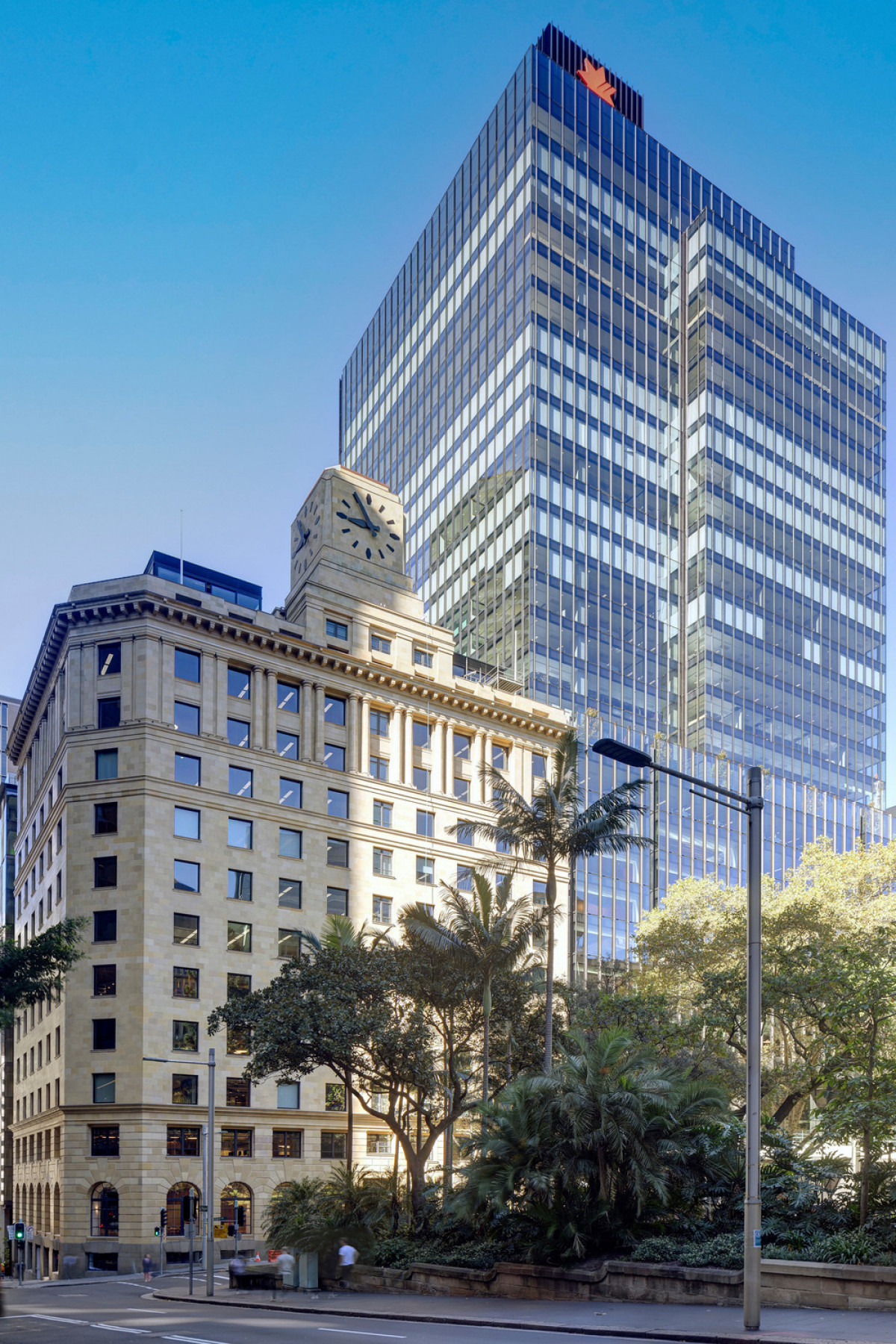 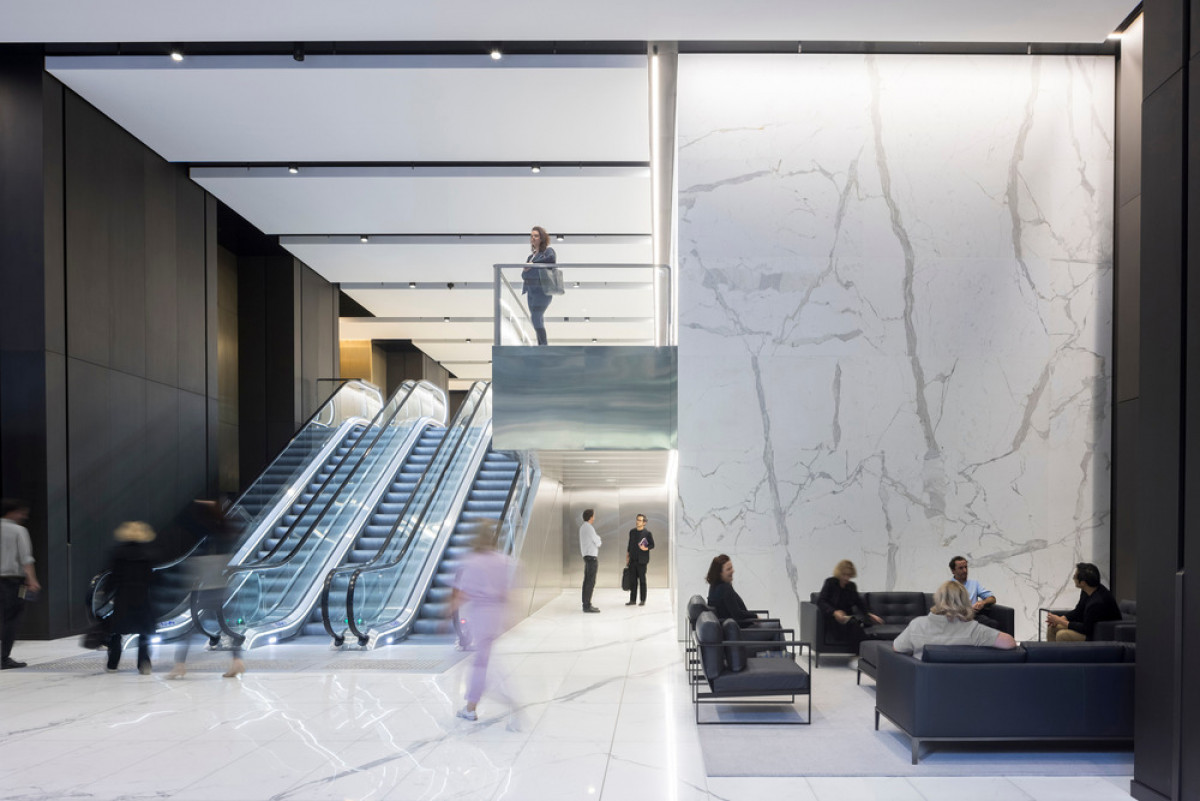 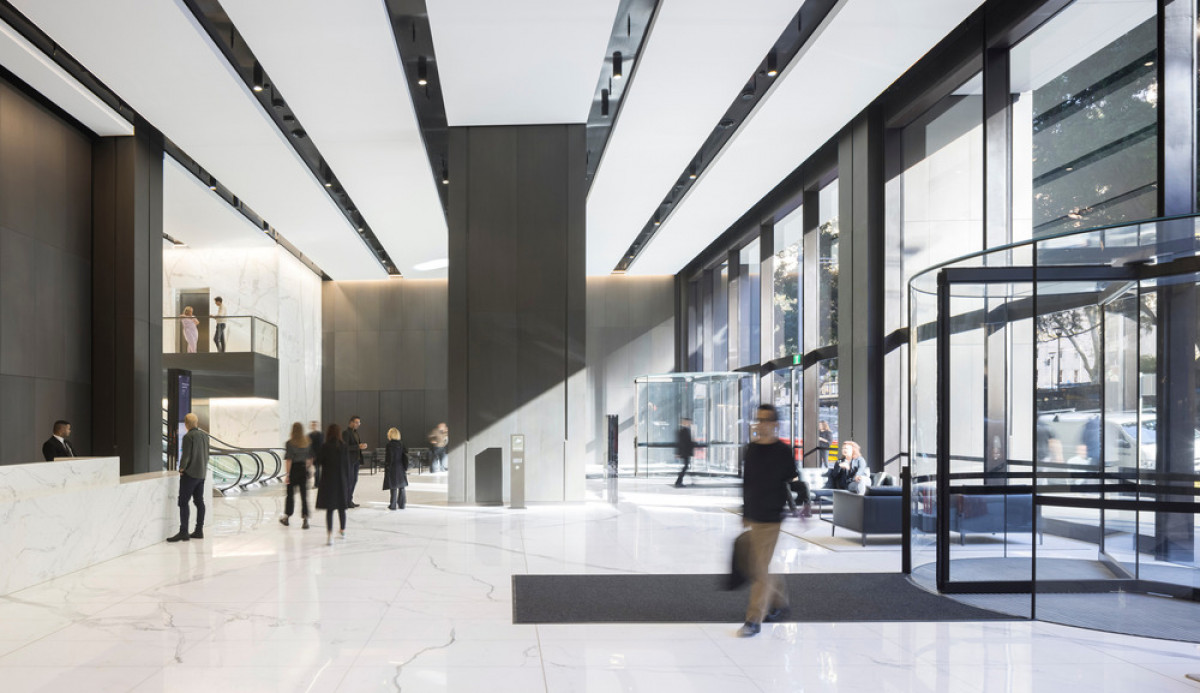 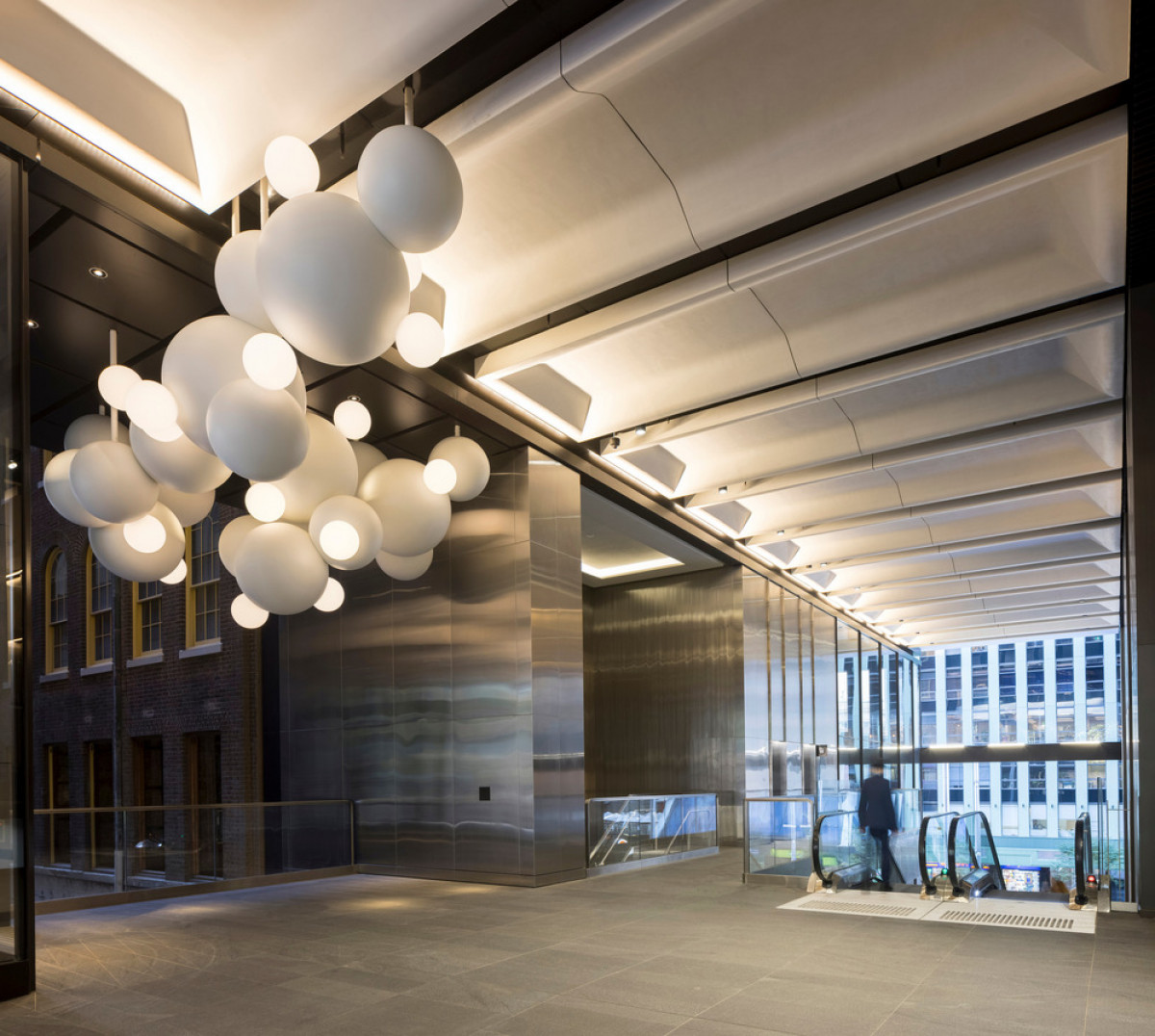 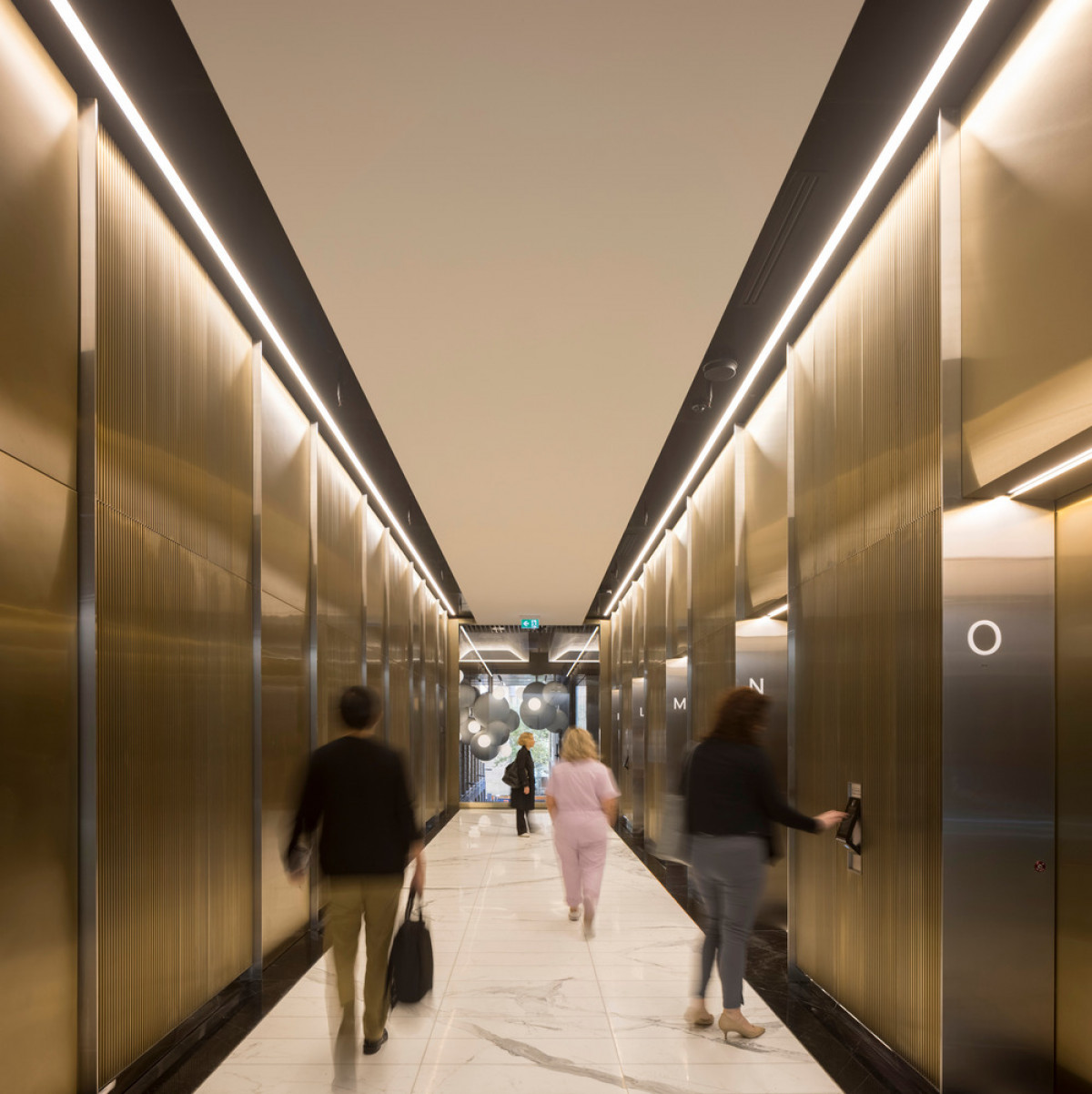 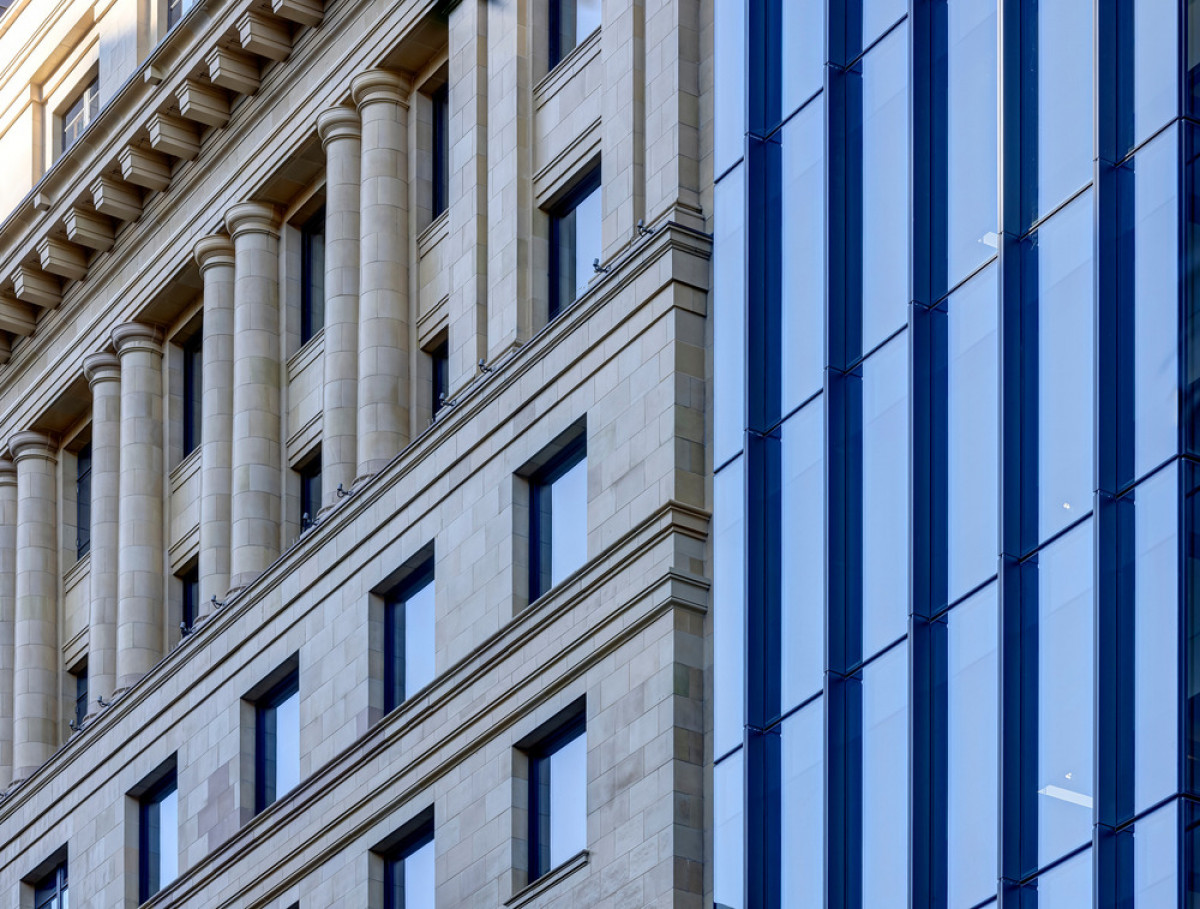 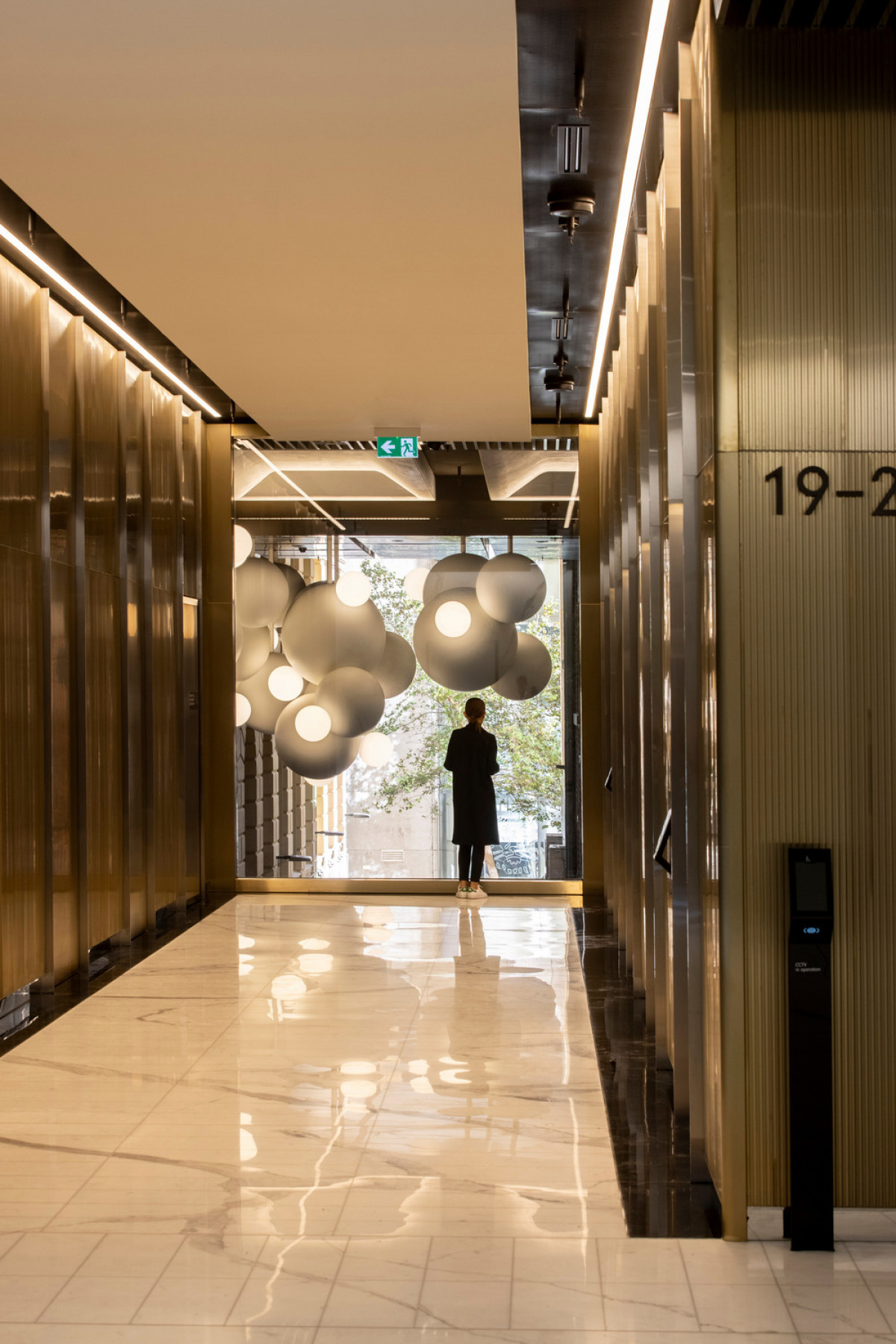 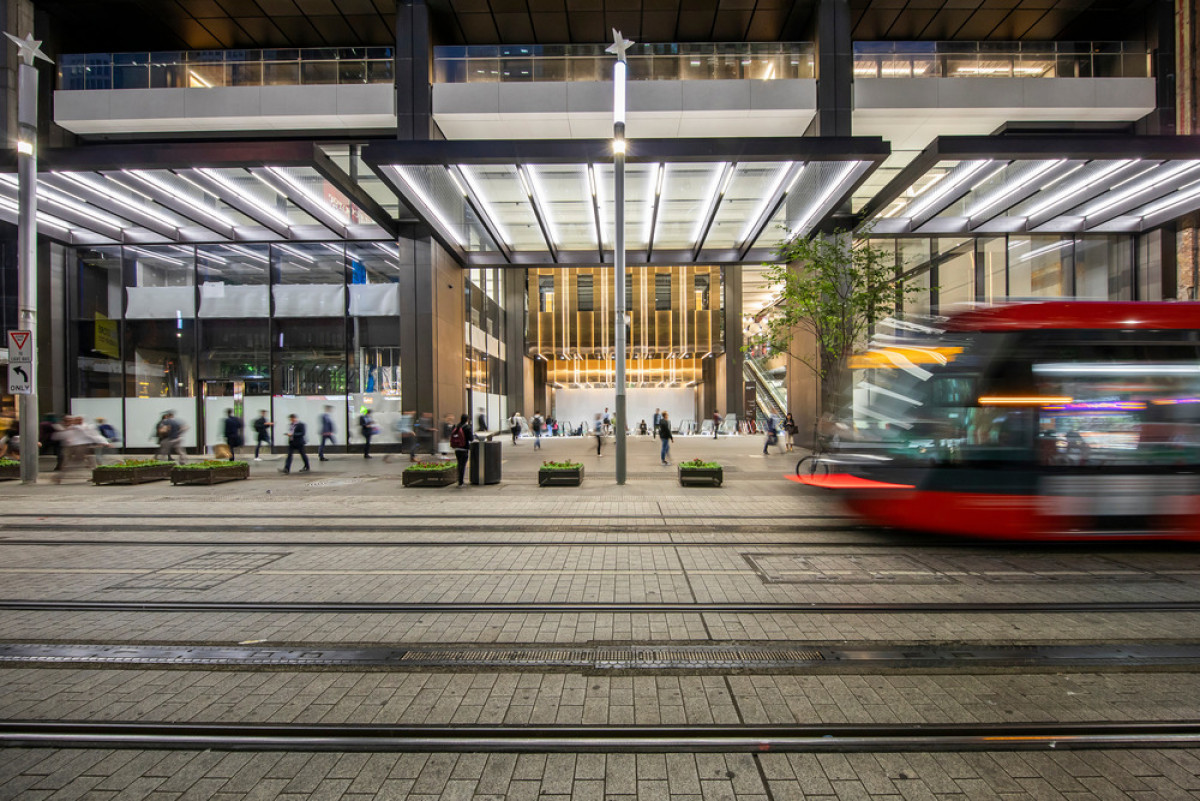 Previously, passengers were funnelled down to Wynyard Station via concourse passageways that ran either side of a central core which felt dark and unwelcoming. From very early in the design process, Make unlocked the potential of the site by raising and suspending the central core, using mega-columns in the boundary walls to support the building’s shear load, much like the flying buttresses of a Gothic cathedral.

This simple design execution of hanging the core has created a new triple-height ‘Urban Hall’ filled with daylight, transforming the arrival experience for visitors and commuters. This space now acts as a sweeping new front door for Sydney’s commuters on a scale commensurate with Wynyard Station’s status as one of the CBD’s busiest transit hubs. It also provides a new pedestrian route from George Street through to Carrington Street and Wynyard Park beyond, right underneath the offices as before, but this time across the full 25-metre width of the site. The hanging core itself has been celebrated –clad in almond gold stainless steel with vertical glazing, it stands out against the GRC-coffered ceiling and provides views into the commercial lift lobby from below and vice versa.

The site accommodates a change in level which enables the George Street elevation to focus on the public, with the station entrance flanked by flagship retail and escalators leading down to a lower-concourse food hall and the transport interchange.

Pedestrians can also now move straight through the site, under the tower to Carrington Street and Wynyard Park.

The Carrington Street elevation is home to the commercial office entrance. A calmer location away from the bustle of George Street, it provides a different perspective facing Wynyard Park with a nod to the street’s history as a prime location for large corporate headquarters in the 1920s, and to current aspirations to return the address to its former glory.

The tower is sculpted to respond to the rhythm of its city block, appearing as a series of interlocking orthogonal blocks of differing scales. This contextual approach gives the building a sense of permanency and belonging. At 133 metres high, the central and tallest block accentuates the overall height, while the other two-step down to reduce the overall volume, preserve sunlight and respond to the views from the various perspectives. Stepping the blocks also creates six roof terraces offering occupants 1,700m2 of outdoor space, alongside a further 280m2 of green roof.

Each glazed panel of the tower’s facade is defined by bronze-coloured anodised aluminium fins to emphasise the verticality of the scheme. The fins vary in depth to respond to different solar shading requirements on each elevation.

The facade of the 10-storey Shell House has been fully restored. The 400-tonne clock tower was retained as a centrepiece of the building’s historic character, and a new public rooftop restaurant and bar, housed in two glazed pavilions, will bring public F&B to the rooftop for the first time. Over 3,000 sandstone-coloured faience tiles were replaced with new tiles hand-moulded by specialist craftsmen. The south elevation has been retained and restored, and it is here that it joins with the new commercial tower, with internal entrances punched through into the tower’s 10-storey atrium. Merging the two has delivered flexible floorplates of up to 3,200m2, which are among the largest in Sydney. Externally, the combination of old and new breaks up the block externally into seemingly smaller separate entities.

The Grade A commercial spaces have maximised flexibility and adaptability, from collaborative workspaces to trading floors. The design integrates 21st-century technology and prioritises wellbeing.

Wynyard Park plays a key role in this, with views into the park and the tree canopy providing biophilic benefits. The entrance is marked by a double-height sculptural veranda, which echoes Sydney’s architectural heritage. Stepping inside, elements like a ribbon staircase and a Calacatta marble floor and walls, laid to simulate a continuous seam cut from the quarry, exemplify the level of quality.

The office space has been left as headquarters for both Brookfield Properties Asia Pacific and the National Bank of Australia, as well as offices for Allianz, Hub Australia, Brookfield, Moelis and Clifford Chance.

Simon Lincoln, Make Architects Asia Pacific Director said: “We are so proud of what has been achieved at Brookfield Place Sydney. This is a true mixed-use project which really demonstrates what urban densification can deliver, merging transport with retail and commercial and F&B to deliver a dynamic environment that benefits from the mix of uses and draws people in and through. Indeed, the design hinges upon this principle, and the key design move of suspending the core was all about prioritising that. It was a true collaborative team effort and leaves a great legacy for Sydney.”

Robert Ousey, Architectus Principal and National Transport Sector Lead added: “It has been a privilege to work with Brookfield Properties and Make Architects on this transformational project in the heart of Sydney. Brookfield Place Sydney has been thoughtfully stitched into the fabric of the city and for the first time provides public access to the iconic Shell House clocktower via a rooftop restaurant and public space. The public transport interface and retail amenity have been transformed to the highest quality and new public through-site links established.?Brookfield Place Sydney is truly a premium office location and reinvigorates the wider precinct surrounding Wynyard Station.”

Brookfield Place Sydney is one of Brookfield Properties’ premium brand developments, one of only six in the world. It has the name Brookfield Place to distinguish its exemplary status in a range of criteria including outstanding transport connections, state-of-the-art building systems, premium workspaces, high-level retail amenity, leading sustainability credentials, 24/7 security, amenities for wellness, and curated placemaking activities.