Joie de Vivre: the beginning of a human-centered architectural dialogue in the heart of an industrial district

Raising the bar on industrial requalification ACDF Architecture, a forward-thinking Canadian firm internationally recognized for designing a new generation of meaningful and impactful buildings, is proud to unveil Vivre, a 225-unit residential building thoughtfully integrated into an industrial backdrop. To breathe new life into a former railyard and industrial sector in Montreal’s Outremont neighbourhood, ACDF was commissioned to design the 8-story apartment complex to help set a new tone for the neighbourhood and to contribute to a new residential community emerging around the new campus of Université de Montréal.

Vivre is one of the first structures to be built along Thérèse Lavoie-Roux Street, paved across the old train yard and tracks to connect the neighbourhood with the new campus, as well as to Montreal’s historic Park Avenue. As one of the first projects to emerge in the rethought district, ACDF embraced the opportunity to set the bar high in terms of delivering an inspiring architecture for future builds.

“We began by focusing on coherency in requalifying the industrial zone to ensure that we wouldn’t leave the district’s history and spirit behind while finding ways to celebrate its industrial soul,” explains ACDF President, Maxime-Alexis Frappier. “That required a very different design approach from our projects in other parts of the city. We wanted to be certain that the building would fit comfortably into its unique context.”

Emerging from the old railyard site with a quiet proudness, Vivre was conceived in the image of its neighbours. To echo the site’s industrial past, ACDF adopted the industrial footprint of the district’s historic buildings, typically designed as concrete structural grids, filled in with brick and glass according to their functional needs. In taking that approach, ACDF embarked on a contemporary reinterpretation inspired by the industrial language of the building’s surroundings. Vivre took form as an exposed concrete grid but used a prefabricated three-panel system custom designed by ACDF. Bricks and windows filled in the grid’s north and south facades, and the panel system facilitated the process of pulling out a series of triangular-shaped balconies from the con­crete grid.

“The integration of balconies in the architectural composition of a residential building is always a great challenge and even more in the case of this project since we wanted to create a building imbued with the industrial architectural language of the neighbouring buildings,” notes Frappier.

The horizontal portion of each balcony attaches to one side of the structure, with deeper parts suspended by a vertical attachment to the concrete panel that houses the windows. With ACDF’s use of a precast system, even the building’s dark manganese brick is cast into the concrete panel. 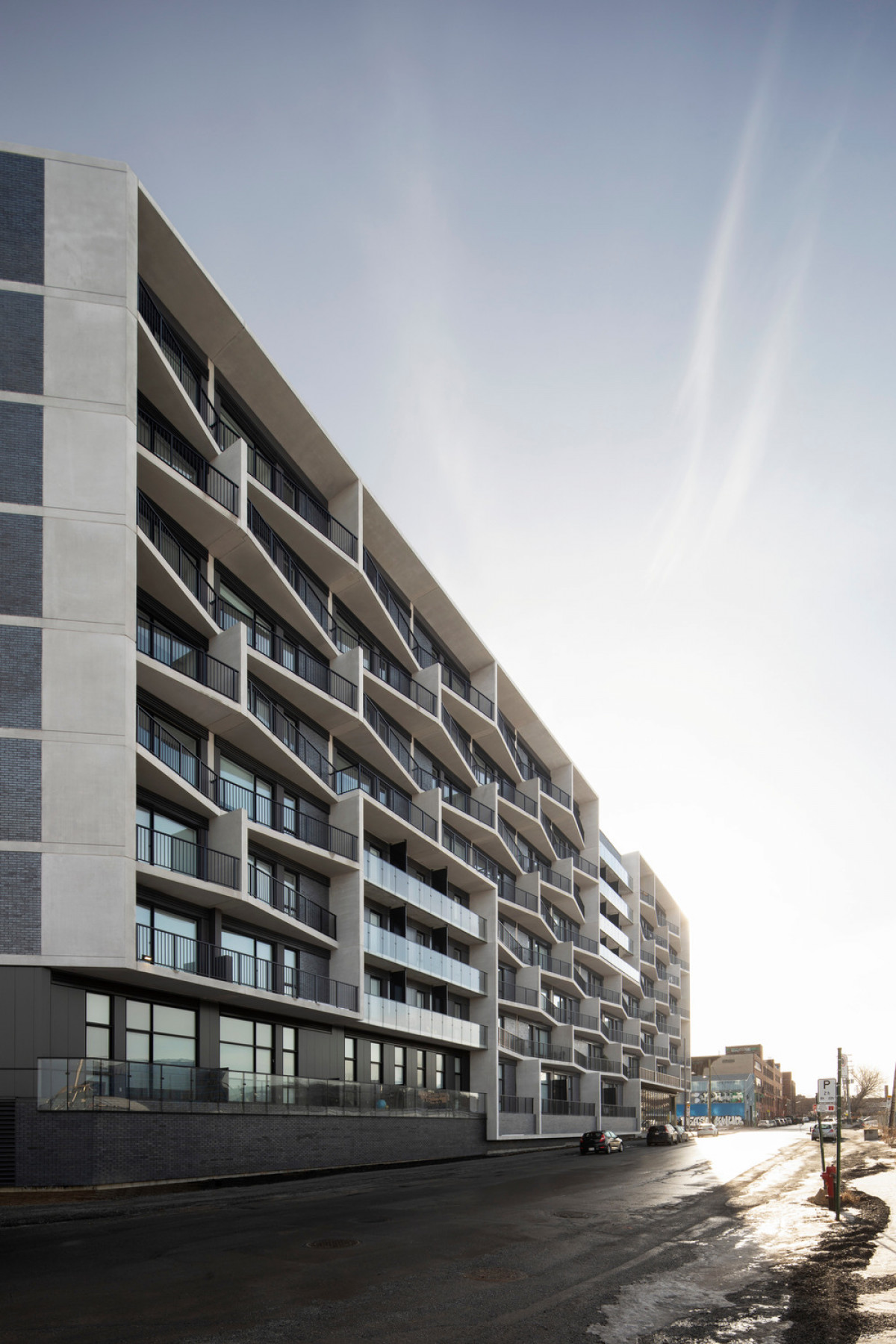 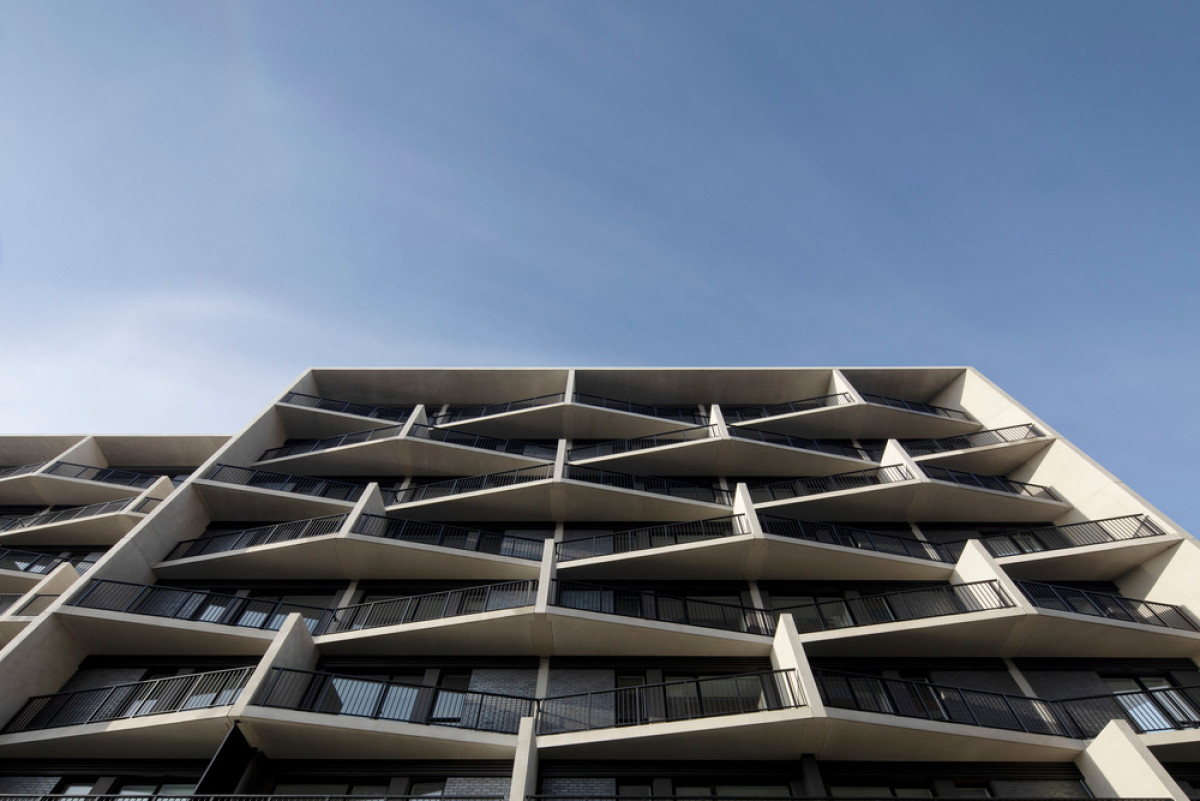 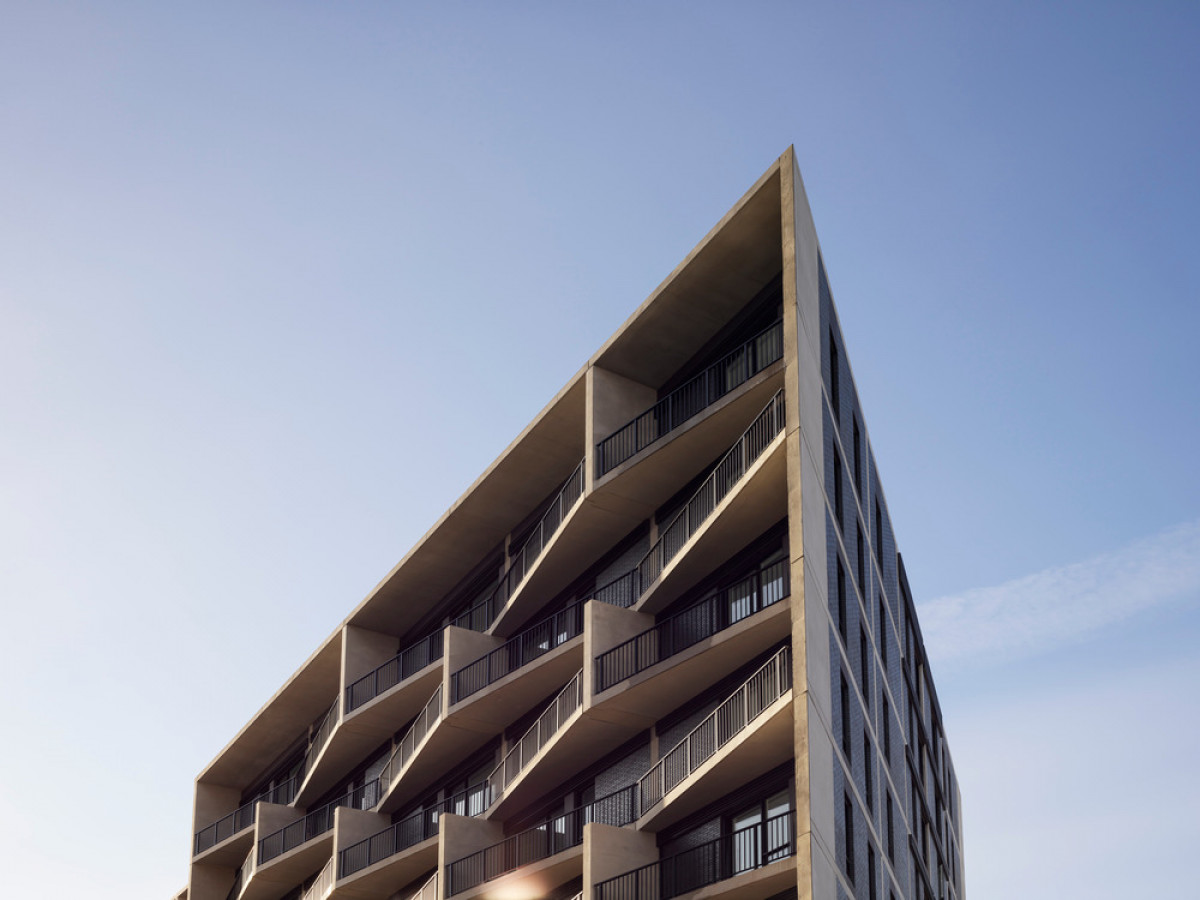 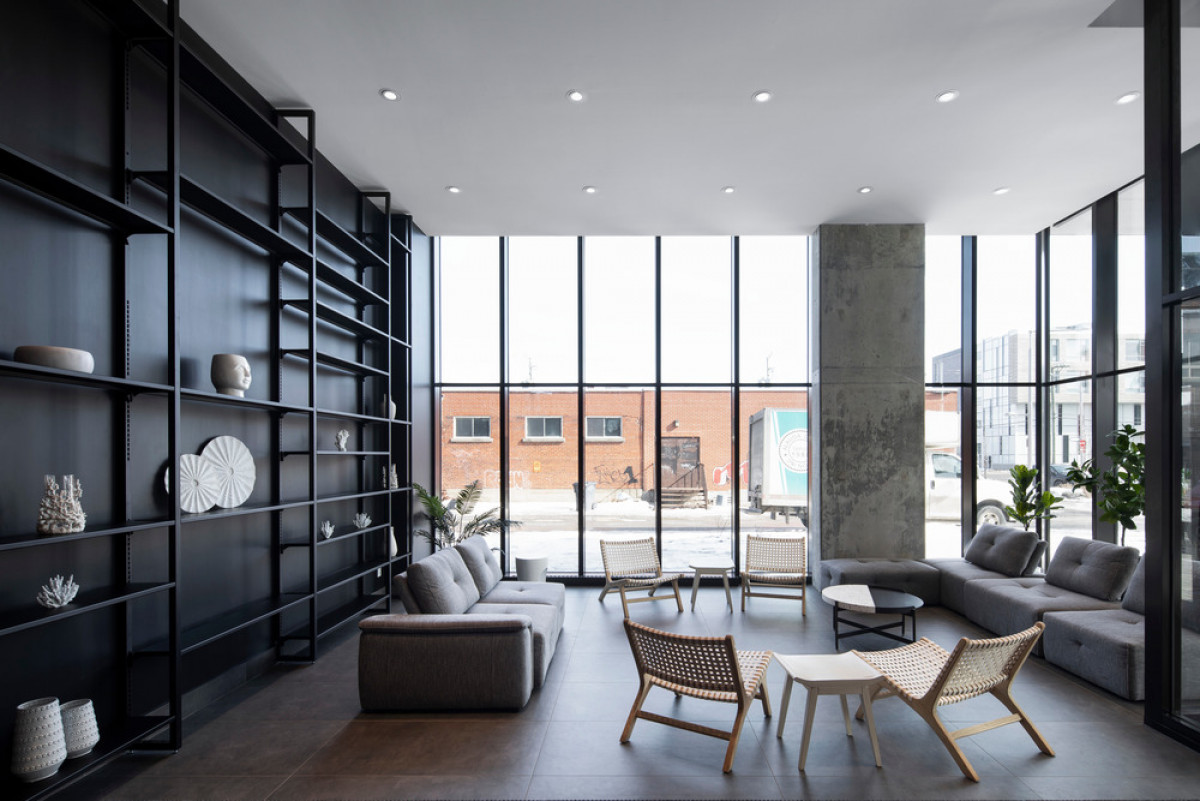 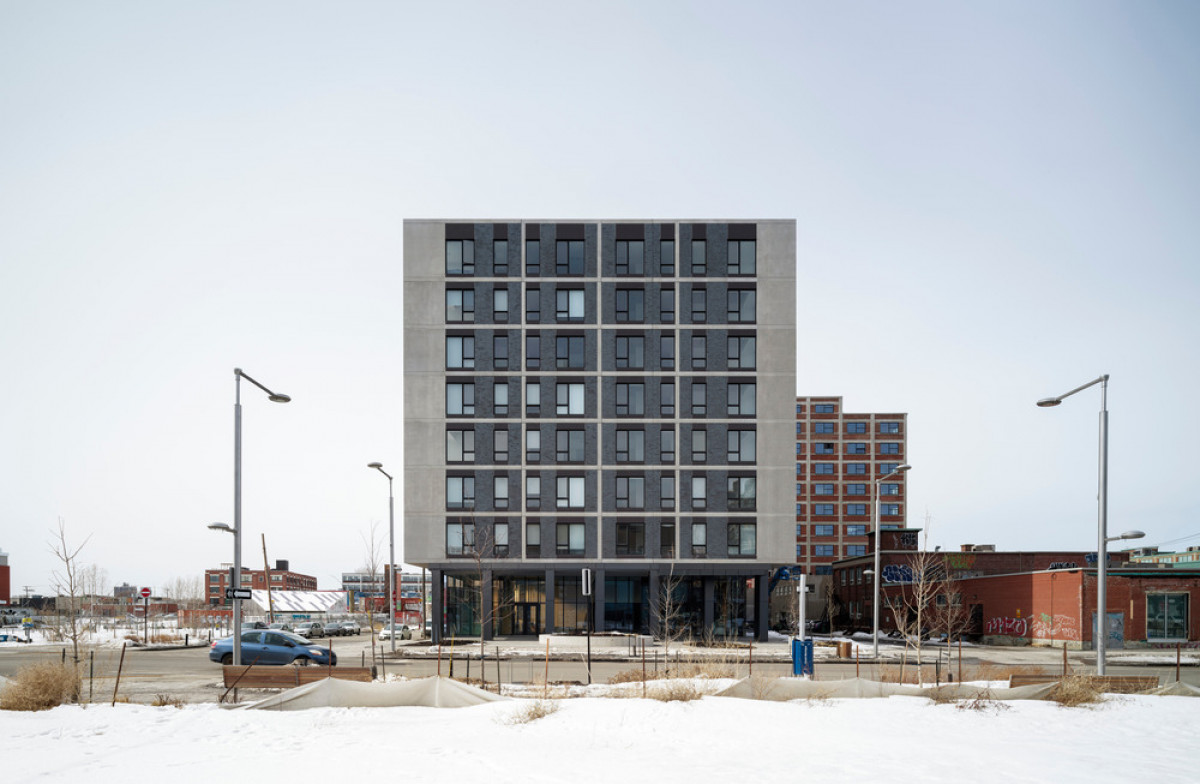 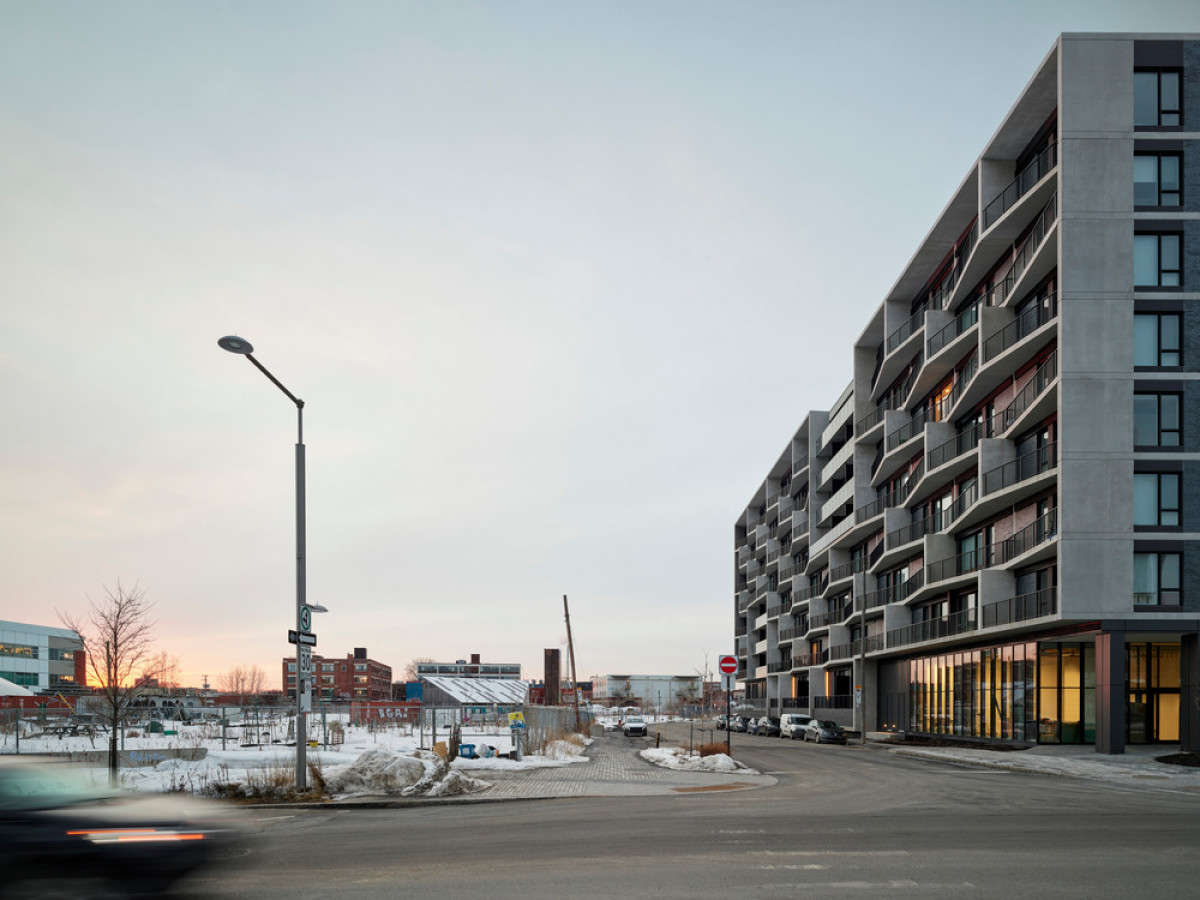 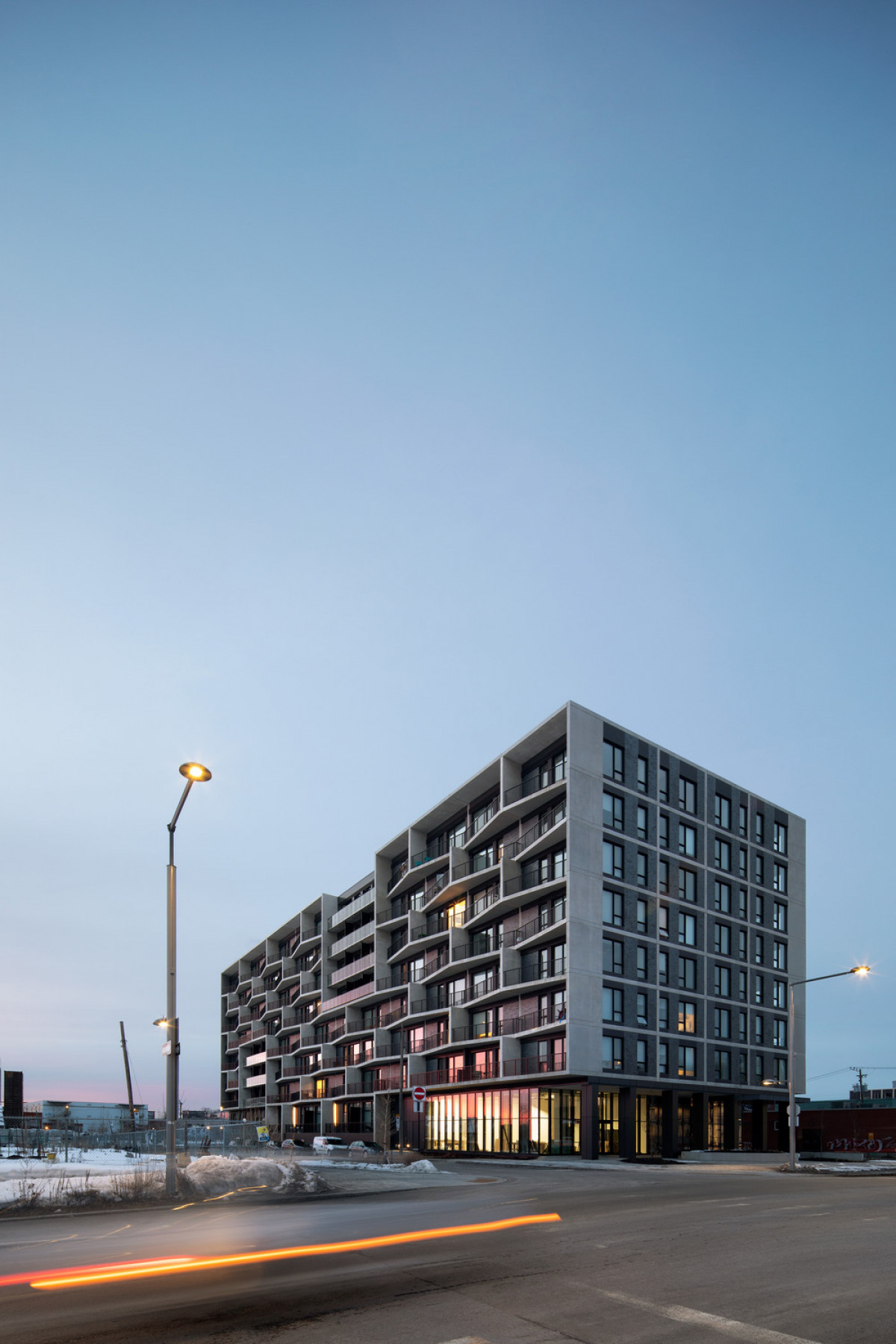 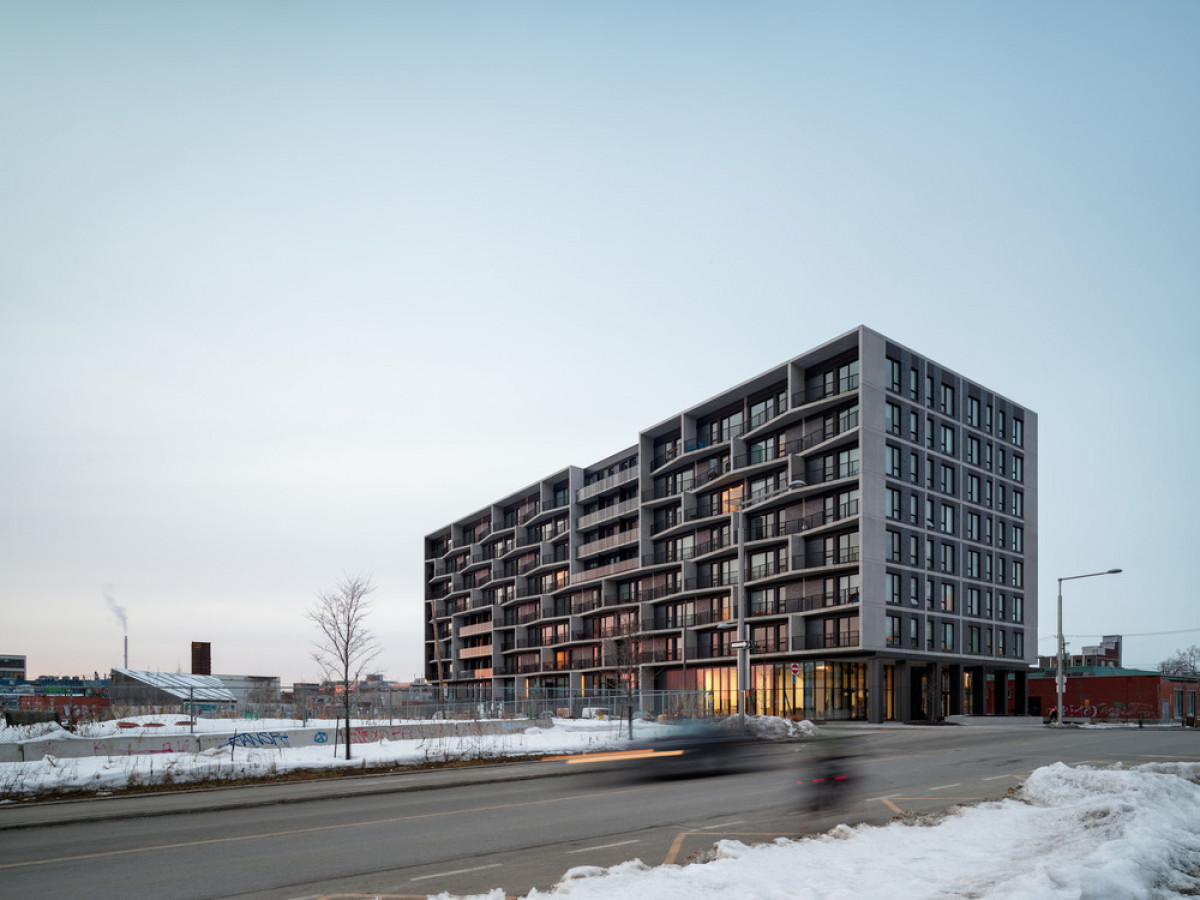 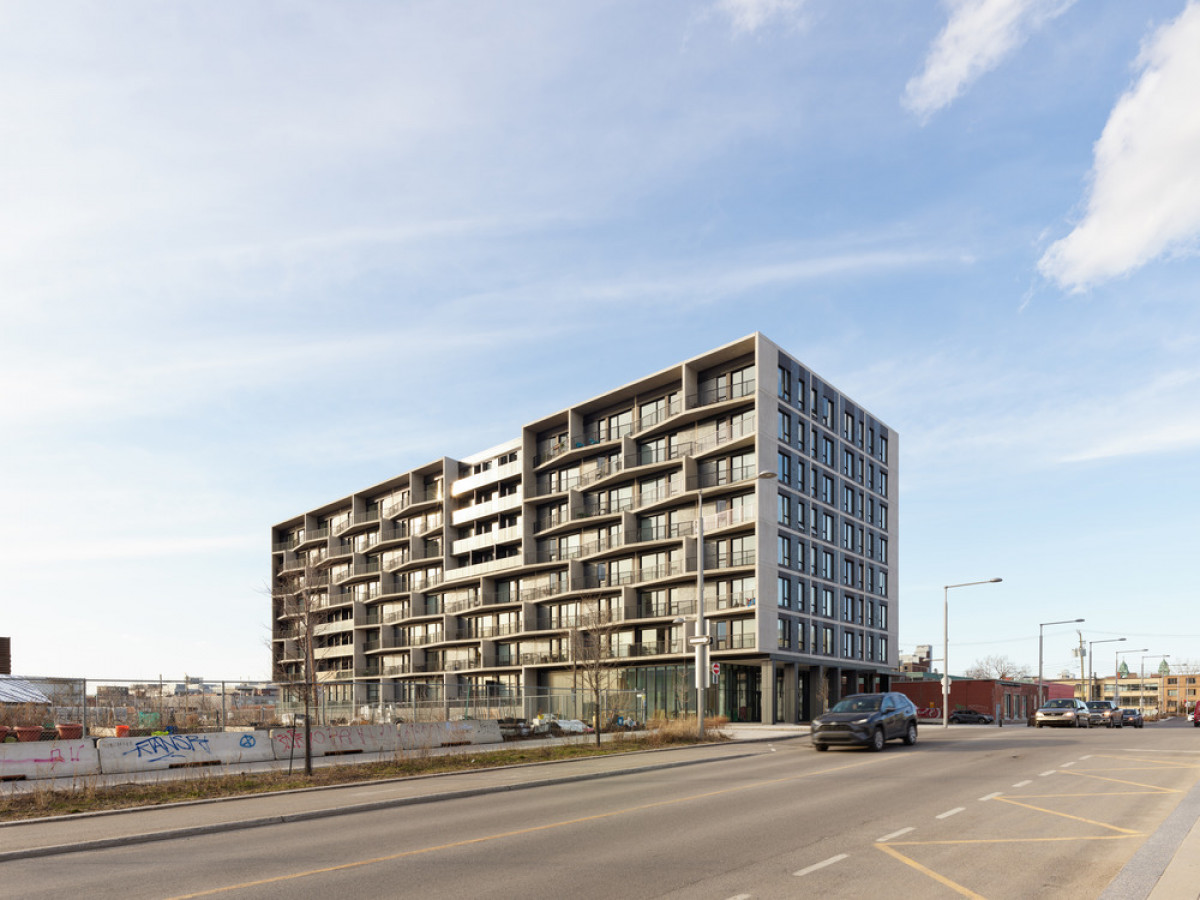 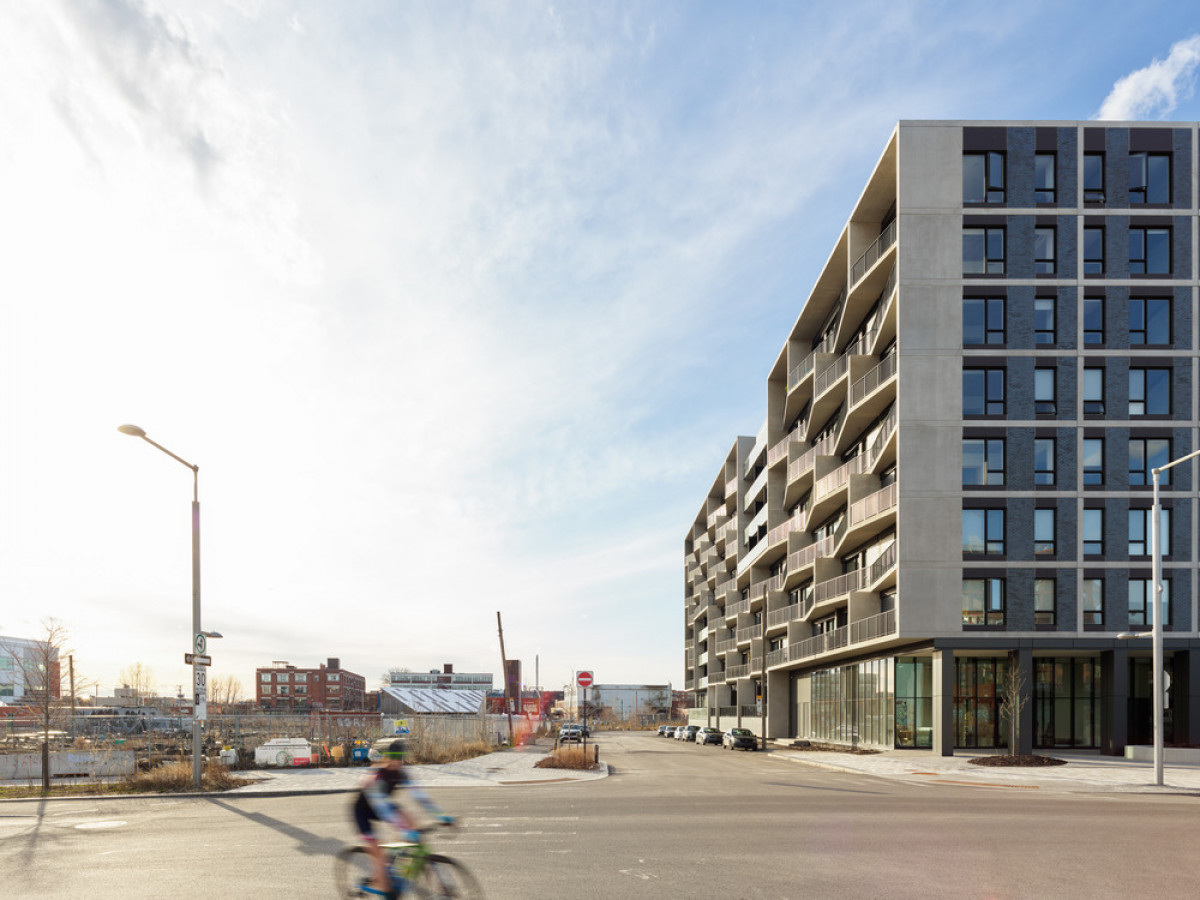 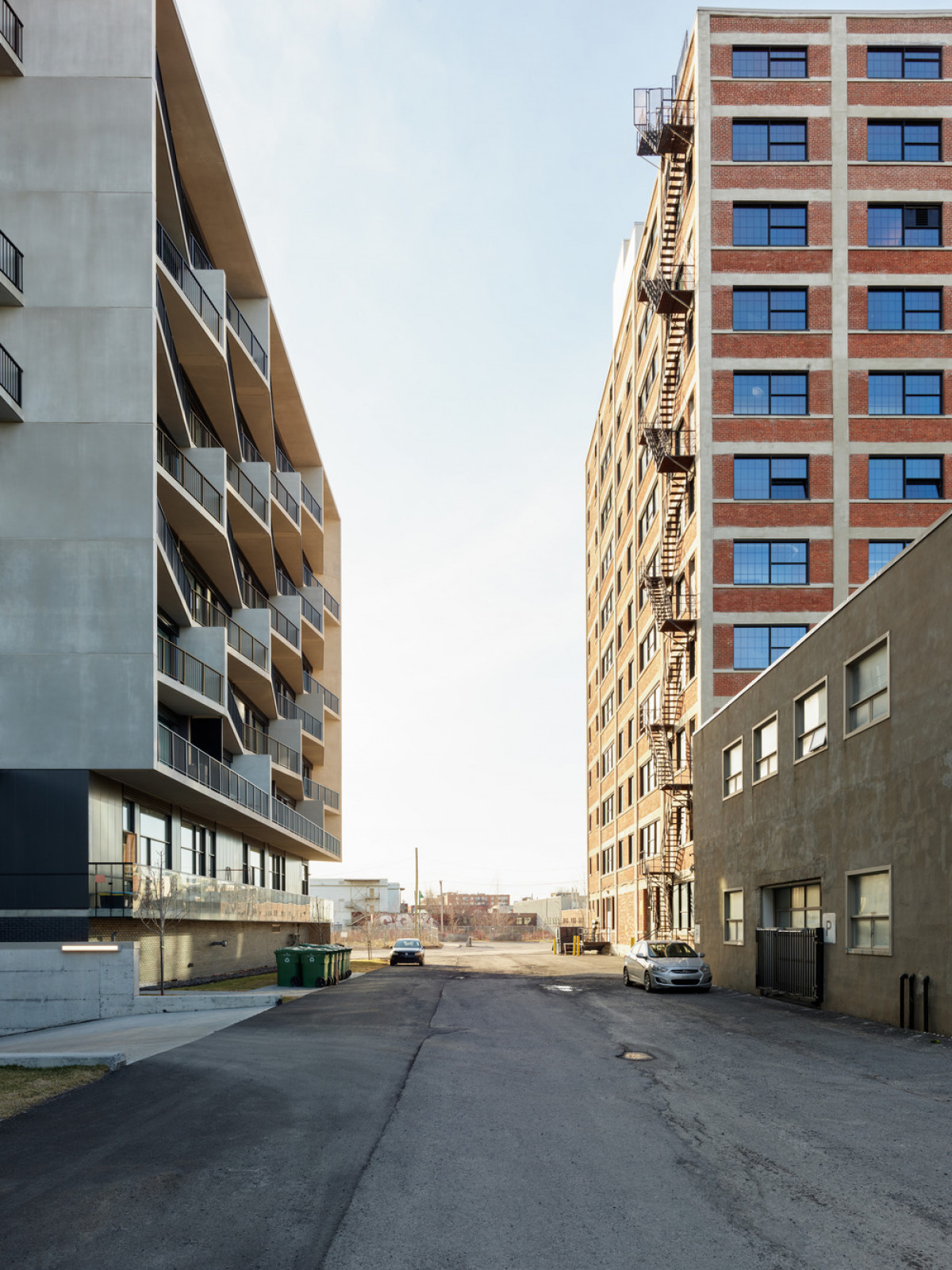 “The quality and performance of the precast system is perfect, and the ease of assembly simplified the process of maintaining the rough façade that we envisioned,” says Frappier. “It’s almost disconnected, and the building experiences greater efficiency due to fewer interventions in the thermal bridge.”

Although part of Vivre’s design includes a rooftop oasis comprised of a terrace, a swimming pool, and a garden, ACDF’s reputation for embracing greater investment in the ground-level presentation is front and centre, ensuring that the building ultimately interacts with the human scale of the urban fabric. Vivre embodies ACDF’s pedestrian integration approach, where humanity is the primary material, and new standards are established to create emotion without extravagance. The ground floor of Vivre overlooks a community garden and opens onto a landscaped square, where residents and pedestrians benefit from a green entry point into the revitalized district. ACDF positioned amenities on the ground level to infuse vibrancy and build connections with the surrounding community. Vivre’s ground floor gym, work area, lounge, and more transport the energy of the building down to street level and set the tone for future builds.

As the city looks to further capitalize on repurposed sites to provide residential options closer to where people work, ACDF’s achievement of balanced dialogue with Vivre sets the stage for such endeavours. With a focus on improved contributions to the public realm, ACDF continues to lead discussions surrounding the rethinking of urban development priorities in the world’s top markets.

“Our attention was focused on ensuring that this project would make a contribution to the requalification of the sector,” concludes Maxime-Alexis Frappier. “We relished the responsibility of contributing to the birth of a new neighbourhood, and for creating a sense of belonging throughout.”