Le Littoral : A Luxury Tourist Residence with a Majestic View of the River by Architecture49

Inspired by the breathtaking view of the river and the picturesque rural setting, and guided by the firm Architecture49 through all stages of design and construction, the owners succeeded in creating a home with a minimalist, sustainable and honest design, which honors the experience of the place in 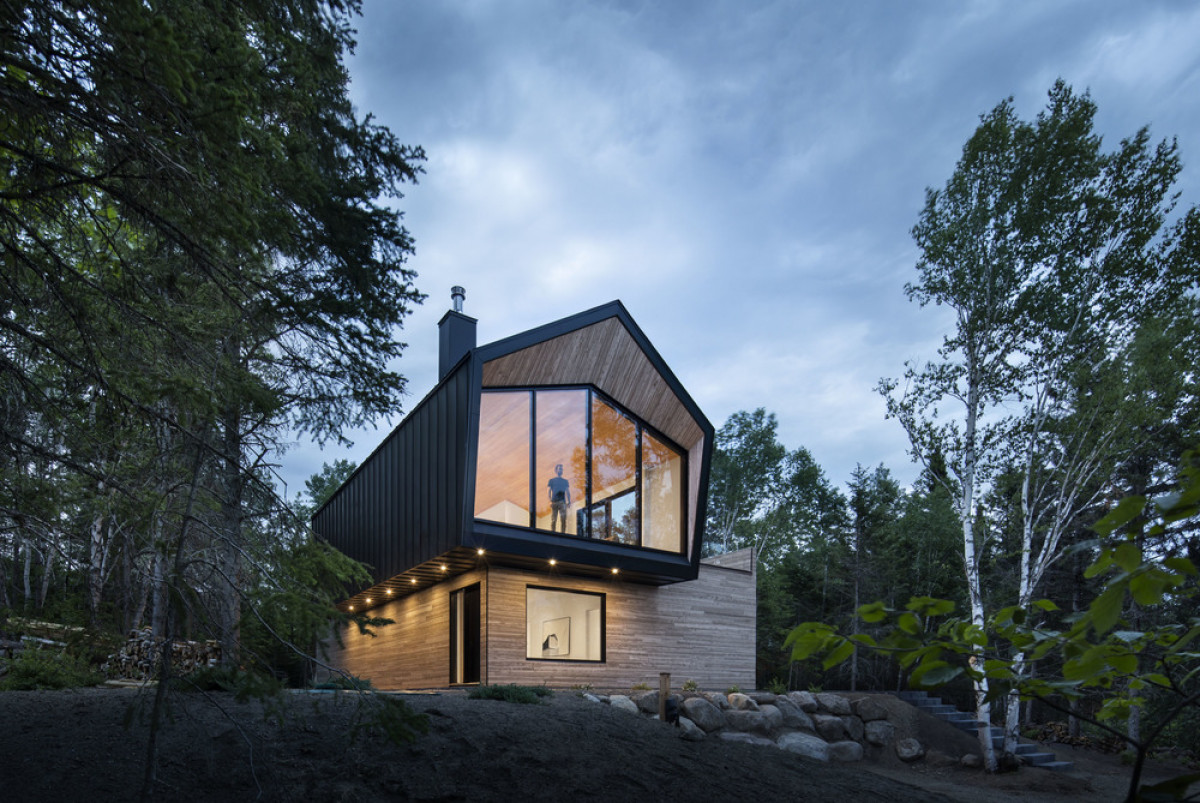 Charlevoix is known for the majesty of its views: the St. Lawrence River meets the sea, the mountains of the Hautes Gorges skirt fertile plains, under a sky that plays the role of a moving painting. The region, its terroir, and the people who live there receive each season many visitors seduced by its authenticity. The architecture of the region combines historical buildings and resolutely contemporary works. Le Littoral blends into this environment by deconstructing and reworking the silhouette of the region's farm buildings, making it a luxury tourist residence that's resolutely contemporary and discreetly inserted into its surroundings.

Purity and functionality as pillars of the project

To make the Littoral an ideal meeting place and resort, conducive to creating memorable moments for the people who stay there, Architecture49 has created a sleek and functional environment, full of discreetly integrated facilities. A swimming pool, sauna, fireplace, and spa contribute to the comfort and relaxation of its occupants. The kitchen, which occupies a major space upstairs, is equipped with a multitude of professional tools for amateur chefs and gastronomes so that they can take full advantage of the high agricultural and culinary center that is Charlevoix.

A neutral color palette (limited to black, white, and wood), a wooden structure, with finishes in noble materials, the use of off-center volumes, and function determining form, are trademarks of Architecture49. The desire of the designer and owners was to create a house from which would emanate a sense of comfort, peace, and calm so that people can feel the spaces contribute to their well-being. The building, which is minimalist and easy to understand and live in, leaves plenty of room for users to express themselves. They can thus better appropriate the space while connecting with their environment. This house is built for Charlevoix rather than a house built in Charlevoix. 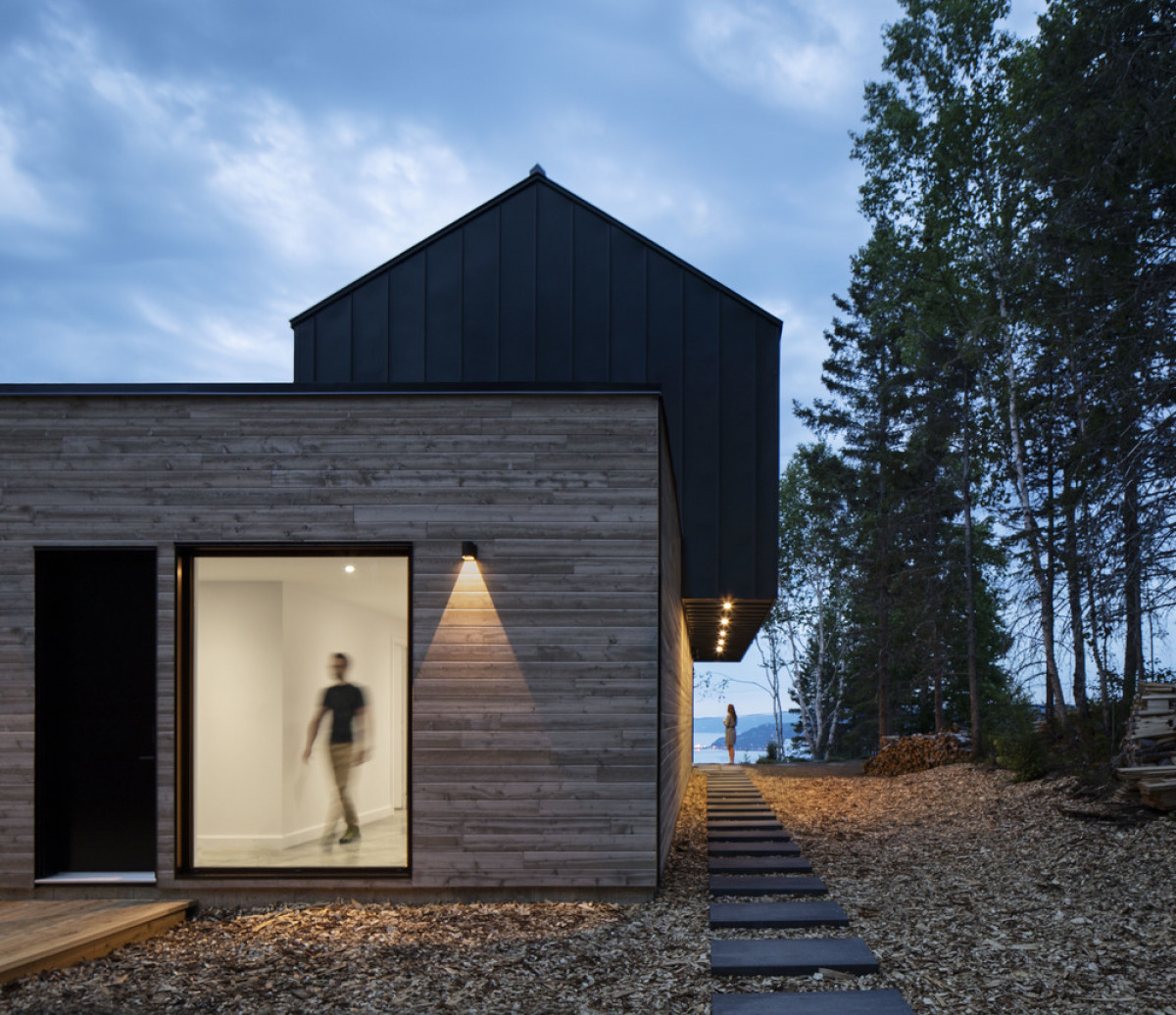 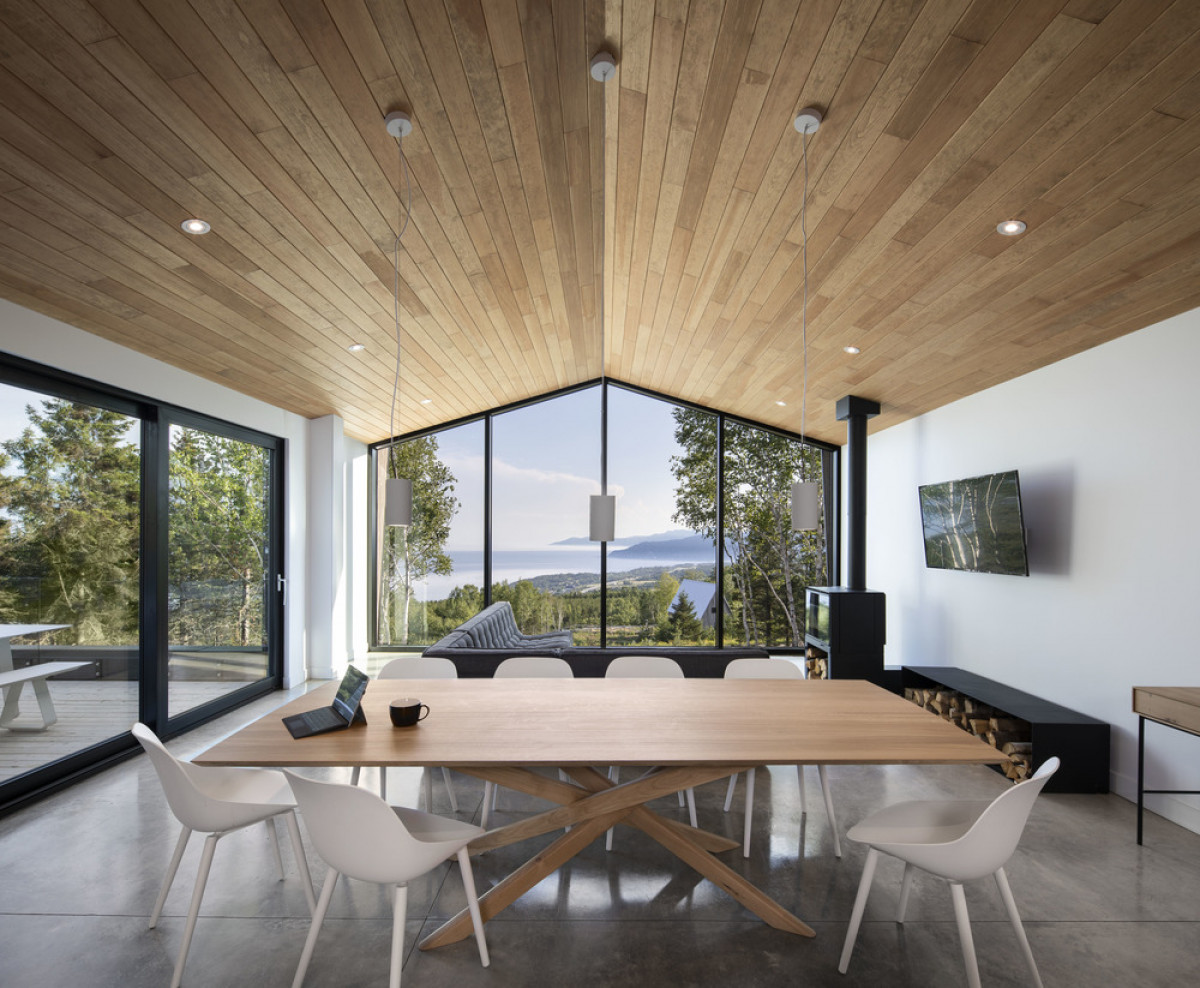 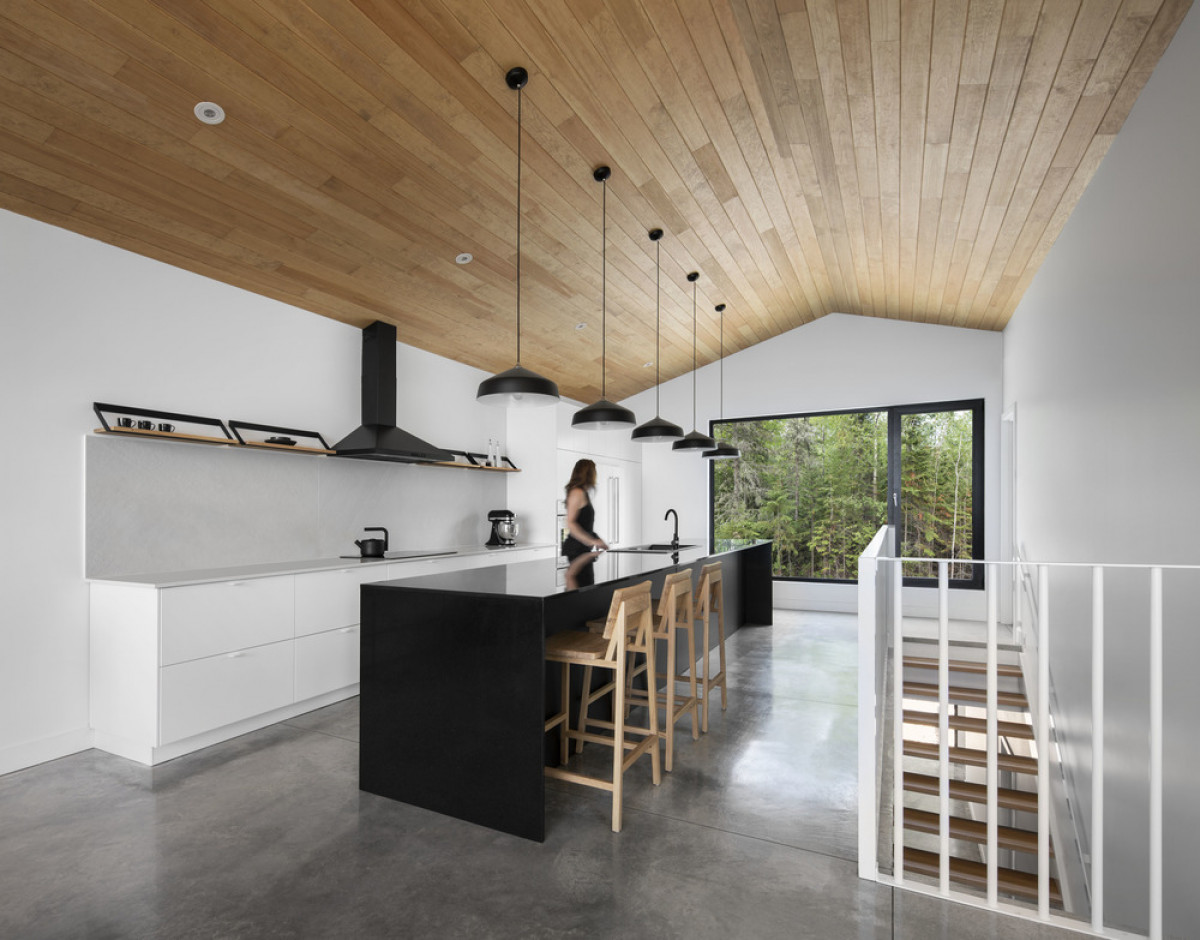 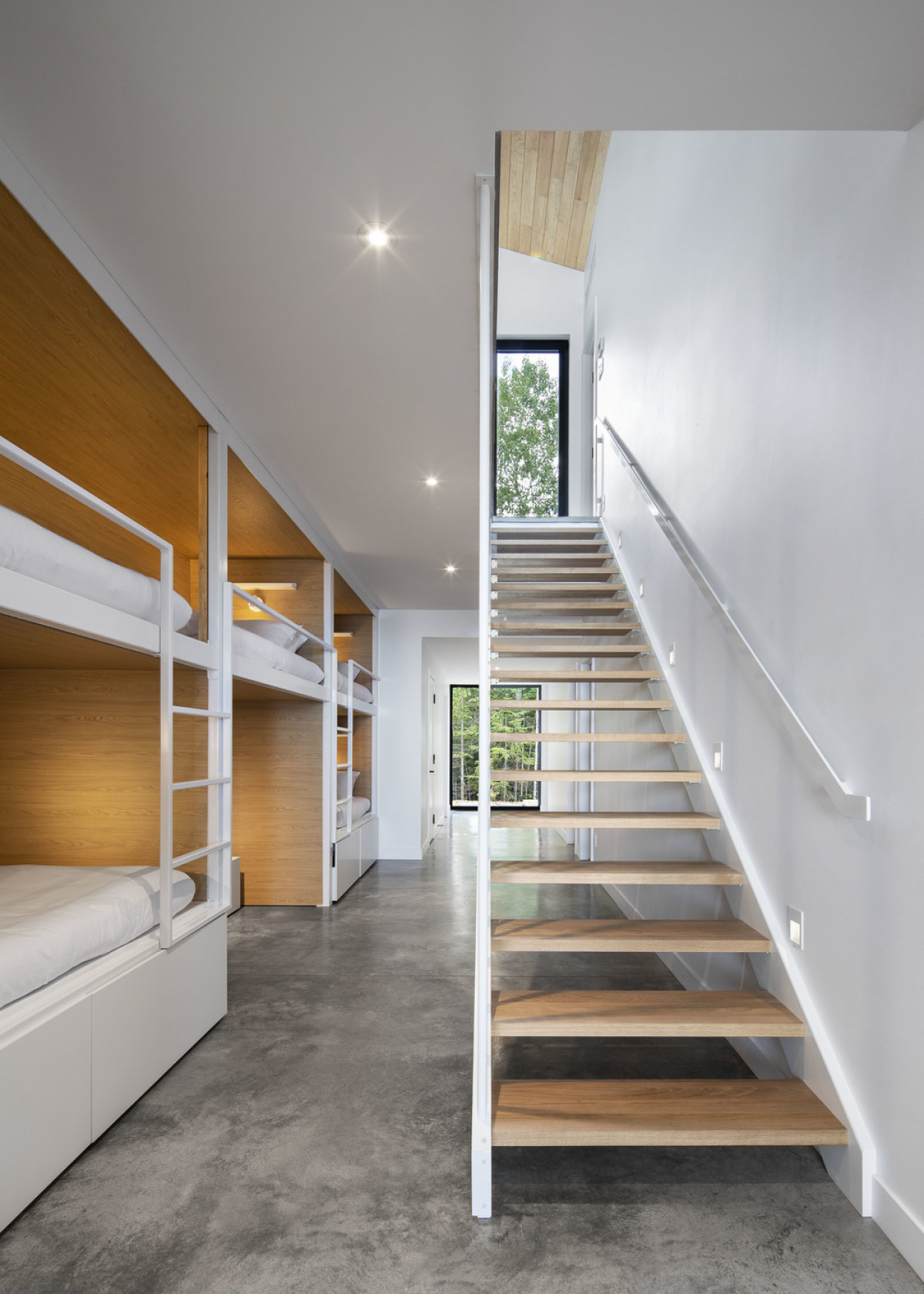 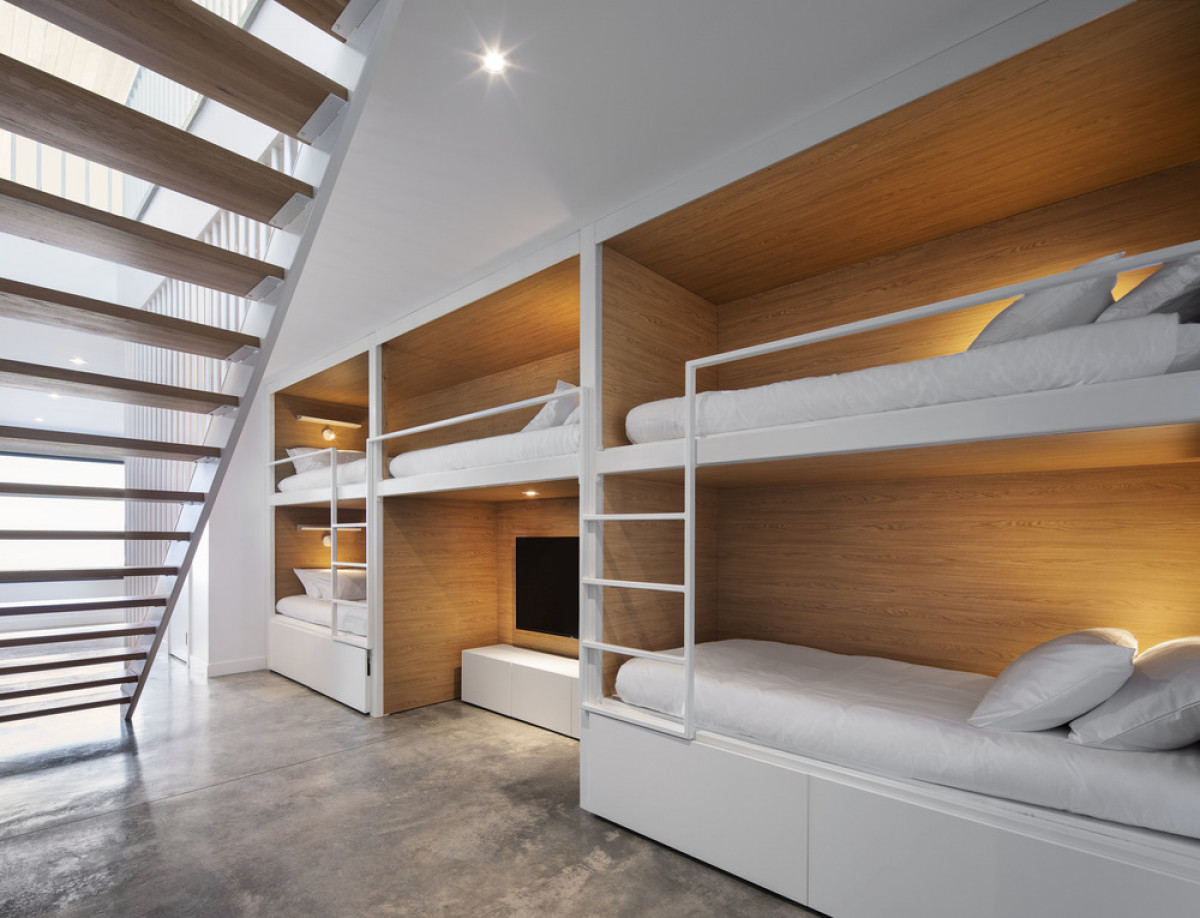 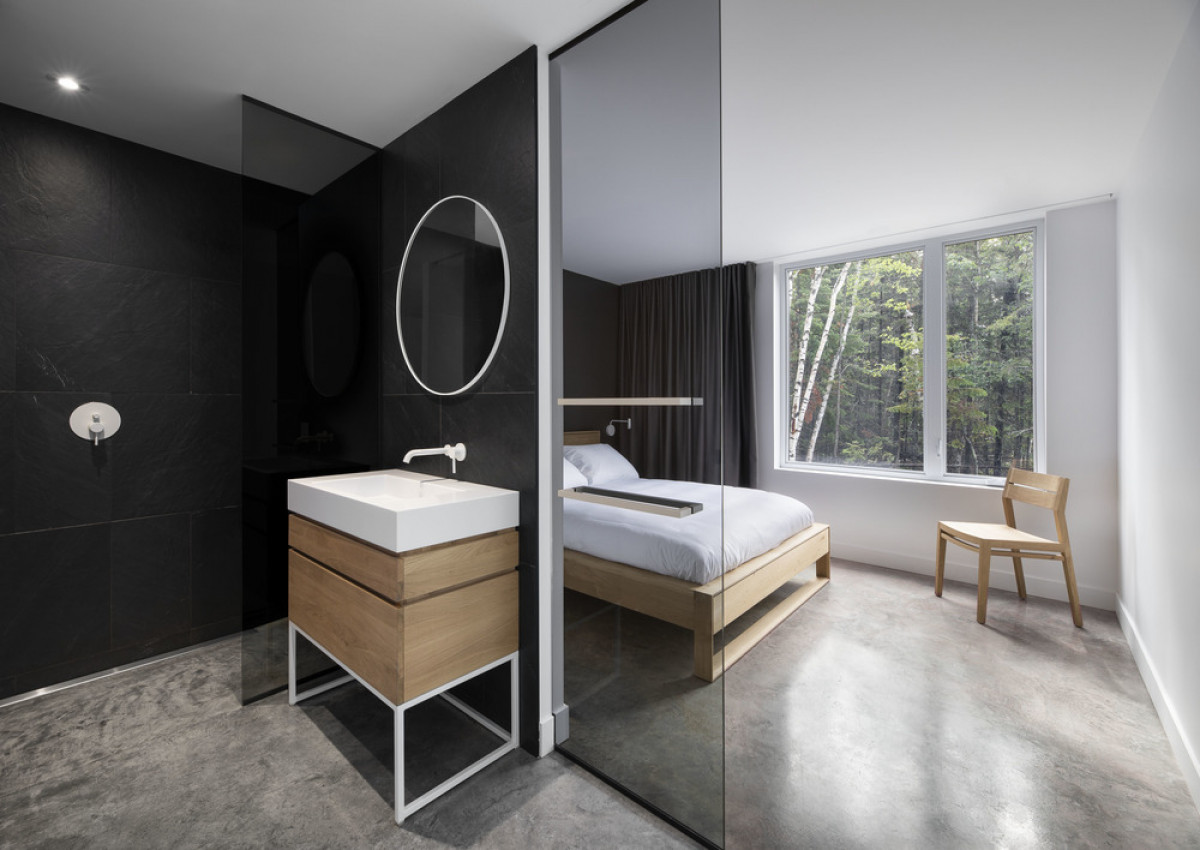 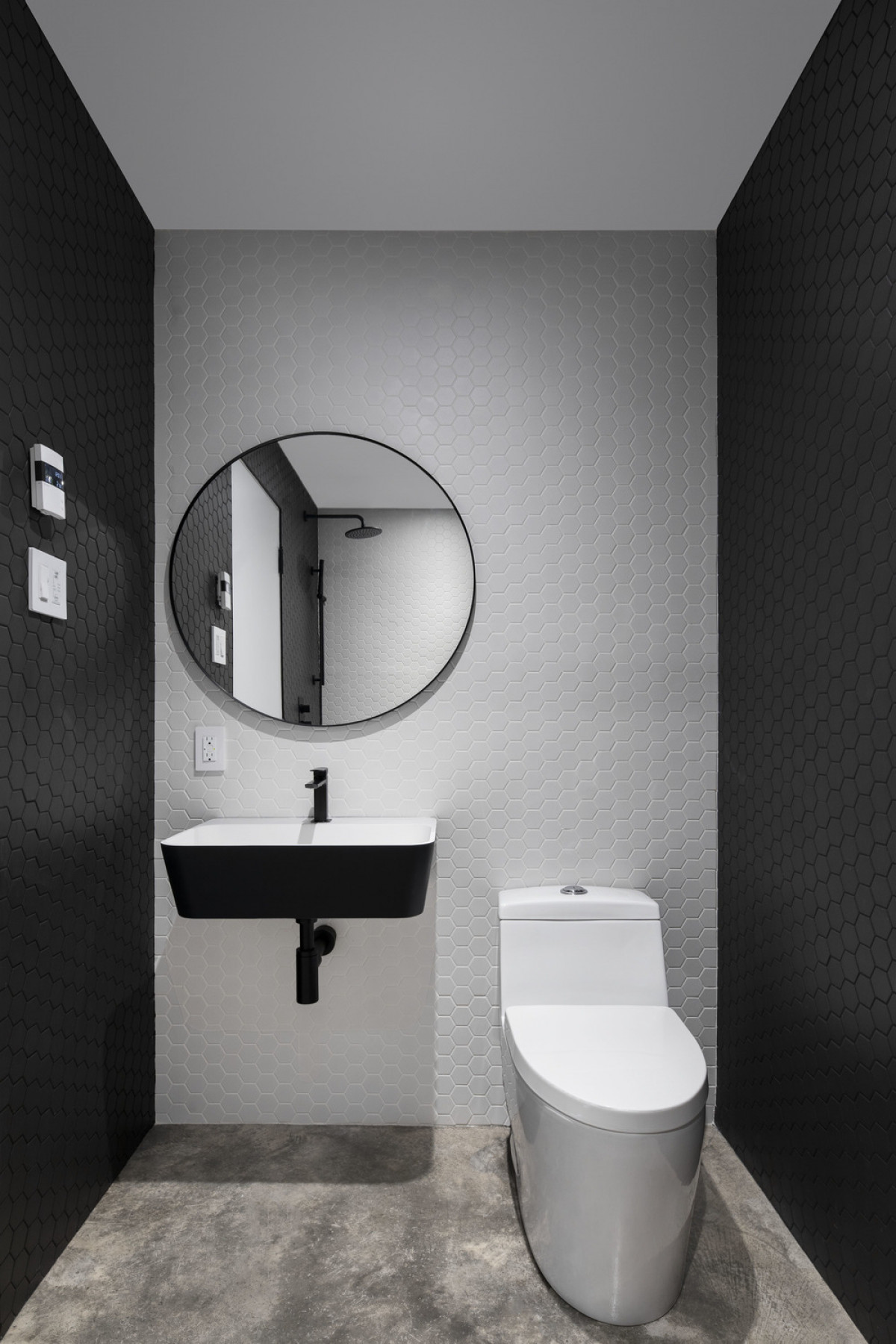 A design in adequation with the natural dimension of the site

The insertion of a resolutely contemporary house in an impressive natural environment was a challenge, but also created the interest of the project itself. A special effort was made to minimize the impact on the land, woodcutting, and landscaping, so as to envelop the residence in a natural setting while enhancing the majestic view towards the St. Lawrence River and La Malbaie Bay. Thus, the cottage was built high up, leaning on the gentle slope and without a basement, as this would have required extensive excavation.

The general shape of the house's plan follows that of the land, all in length, and is laid out in a precise axis, chosen to offer a view of the river in front and a great intimacy thanks to the forest at the back. Around this axis are optimally positioned the volumes, openings, and interior rooms. Their layout minimizes energy consumption in both summer and winter, creating a cocoon that maximizes the intimacy of its occupants while offering the rooms the soft luminosity of a forest clearing.

The project is integrated into the environment of its region by using local resources, businesses, and artisans. The structure, assembled a few kilometers from the house using locally produced FSC certified wood, creates the skeleton of the building. The choice of natural materials, such as eastern cedar and pine, produced in the region, was obvious. Subsequently, the selection of local equipment and suppliers was central to the project. The kitchen countertop is made of Quebec granite, the roof is made of contemporary sheet metal, the chimney has a high ecological performance, the pool and even the home automation are produced by Quebec companies that demonstrate the know-how and technology of the province.

About the Montreal office of Architecture49

It was in 1955 that six architects with strong personalities and diverse backgrounds decided to found Affleck, Desbarats, Dimakopoulos, Lebensold, Michaud & Sise. For more than 30 years, starting in the 1970s, the firm would later take the name Arcop, an acronym for Architects in Co-Partnership. Throughout its history, the firm has had a great influence on Quebec and Canadian architecture.

Since 2014, six architectural studios have joined forces, their expertise, and their complementarity to form a single pan-Canadian entity: Architecture49. This entity combines the experience and reputation of Arcop, AE Consultants, North 46, PBK, Smith Carter, and WHW Architects.

With a staff of 40 architects and technologists, the Montreal office of Architecture49 is distinguished by its long practice in the management of large and small scale projects and in the resolution of complex programs, particularly in the rehabilitation of heritage buildings. Its architects are recognized for their ability to promote architectural expression based on a language that is both innovative and timeless.

The firm also has a significant number of new constructions to its credit and, as a generalist, is active in several sectors: public and cultural buildings, heritage buildings, businesses, hotels, and convention centers, sports facilities, etc. and offers services in architecture, urban design, and interior design.