Sid Lee Architecture signs off on the transformation of the Marriott Château Champlain Hotel, an emblem of Montreal's modern heritage 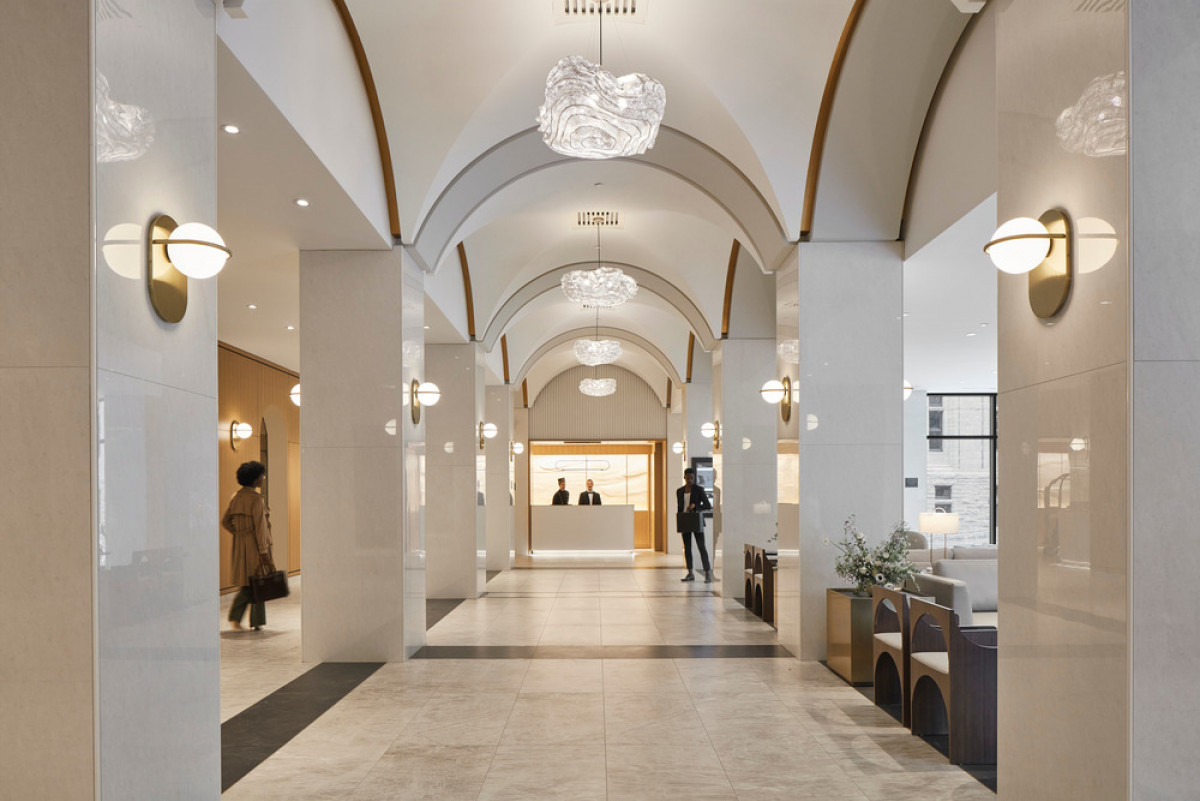 Originally designed by Quebec architects Rogers D’Astous and Jean-Paul Pothier in 1967 at the time of the world’s fair, the Château Champlain is notable for its iconic structure and technical accomplishments. Overlooking the city from the top of its 128-meter, 38-story height, the hotel was once the tallest in Canada. Today, it continues to catch the eye of passers-by downtown with its rhythmic half-moon windows and the neo-Roman arches of Windsor station. Earning the nickname of “the cheese grater,” these window frames simulating the look of balconies were put at the core of the design narrative created by Sid Lee Architecture. 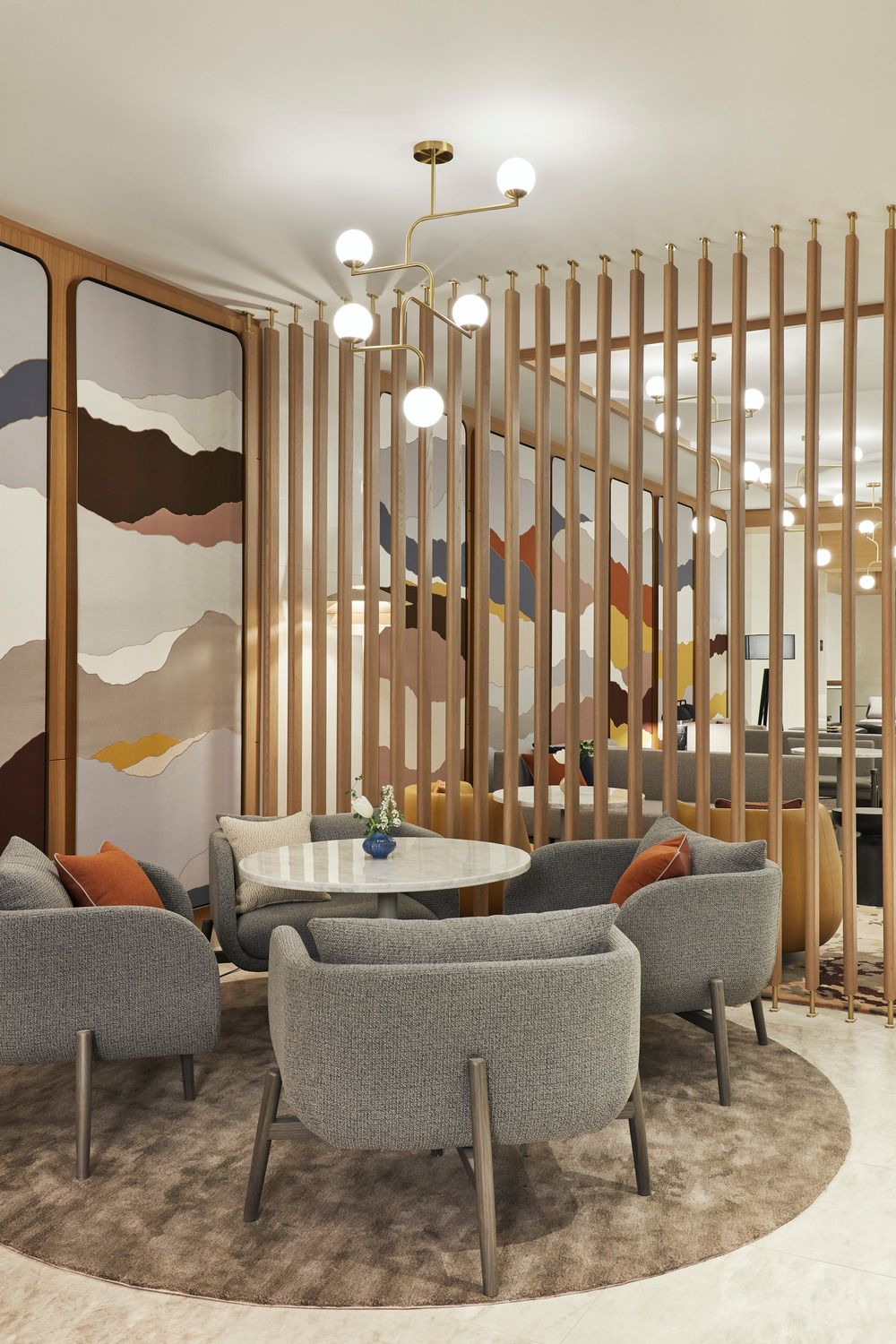 First restoration
Initially undertaken following the hotel’s acquisition by the Tidan Group in 2018, the restoration project effected by Sid Lee Architecture represents the first major renovation of the building since its construction.

Symbolic of Quebec’s architectural heritage, not to mention being an exceptional visual landmark at the heart of the city, the Château Champlain today unveils an updated design that enhances the majestic urban landscape offered by its variety of panoramic views. Reimagined in an elegant, timeless style, the new Château Champlain reasserts its place amongst Canada’s most eminent hotels through a renewal of its interior design that integrates the spirit of the Marriott brand.

Like a winter garden
Bordered by the gardens of Place du Canada, Dorchester Square, the Old Port, and Mont-Royal, the Château Champlain enjoys an exceptional location within the city. Inspired by the uninterrupted views offered by the hotel’s interior “balconies,” Sid Lee Architecture decided to go with an original conceptual approach that highlighted the beauty of the surrounding landscape during winter.

The contrast between the characteristic cold weather and the hotel’s warm hospitality is materialized in the spatial experience through the use of organic forms, desaturated colors, and reflective finishes as well as by the use of natural materials such as wood and stone. The beautifully crafted interiors also include many nods to the Saint Lawrence River as well as the neighboring gardens, as if to extend their visual traces into the heart of the building.

The Château Champlain has been reimagined as a nearby refuge in the heart of the city—a comforting, harmonious environment that encourages taking in views of the city, all year long.

Public spaces
At the hotel’s entrance, porcelain and finely veined white stone with the appearance of icy surfaces were carefully selected to cover the arches and floor. On the lighting fixtures and in integrated furnishings, golden accents reminiscent of bare branches punctuate the space with warm touches, evoking reflections of light on the snow. Behind the reception counter, an art piece designed by Sid Lee Architecture, in collaboration with MASSIVart and executed by artist Pascale Girardin, rises delicately and sets the tone for visitors’ experience of the hotel.

The open, multifunctional Greatroom permits visitors to wander around as they would in the city, discovering references to the organic world outside in its design details. Wooden openwork architectural screens evoke the ambiance of the mountain, giving way to spaces that are intimate without limiting the flow of light within the space. These fluid spaces were conceived to be continuous in order to facilitate wandering or pausing to eat, drink, work or have a conversation throughout the day.

Convivial as well as enveloping, the restaurant is notable for its compositional style reminiscent of the interior promenades. The subdued lighting simulating skylights tracks the progression of the sun, changing from bright light in the morning to a subdued twilight ambiance at the end of the day.

The exclusive “M Club” accessible from the Greatroom stands in contrast to the surrounding design with its walnut wood paneling and more somber color selections. Prized by its members, this section includes a lounge and workspaces, as well as a dining room featuring a sophisticated, modern design that offers an elevated experience in keeping with Marriott’s highest standards.

In the public areas, certain elements were preserved—such as a picture of Samuel de Champlain himself, recalling the original designers’ fascination with this figure—in order to underscore the property’s historic foundations.

Private spaces
Throughout its 520 rooms, the design was revamped to give the window the importance it deserves through the use of soft shapes and complementary colors. The carpeting, wall coverings, and integrating furnishings designed by Sid Lee Architecture and produced by local company Meubles Saint-Damase adorn the rooms, evoking a sense of comfort.

The challenge in redesigning the rooms lay in preserving their existing partitions. The room divider in the center of each room was reconceived to create a private dressing area serving as an antechamber to the bathroom.

By keeping the skyline within view and enhancing the rooms with light, neutral tones, the visual palette now puts the accent on the multitude of views offered by the rooms, whether they face Mont-Royal, the river, the port, or downtown. The result is a renewed, updated version of the hotel that will stand the test of time while guaranteeing a restful yet memorable experience. 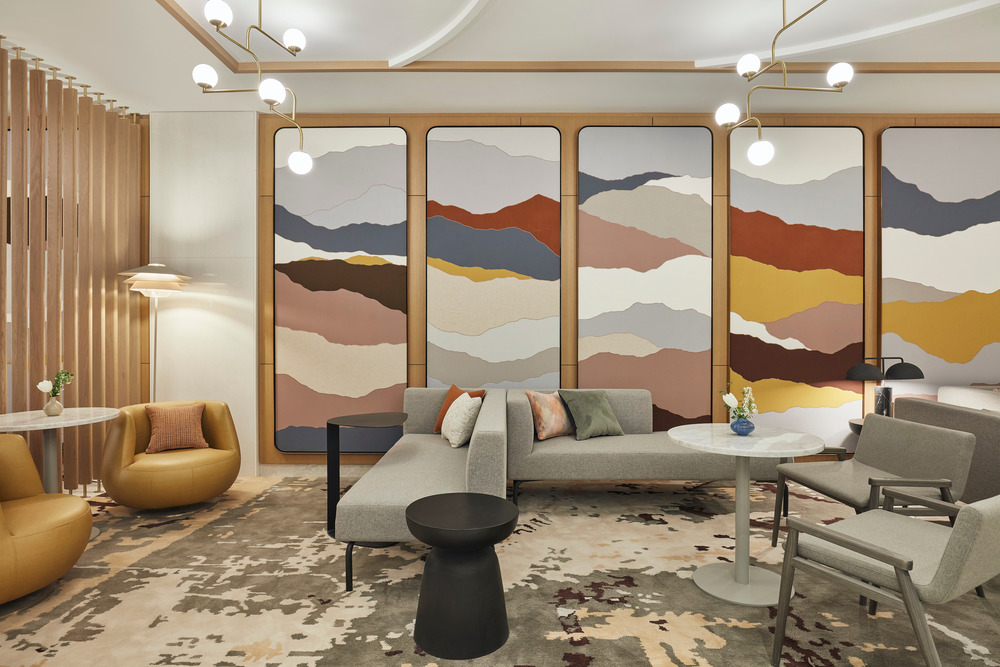 Integration of art
MASSIVart collaborated with Sid Lee Architecture for the integration of 59 works in various spaces of the Marriott Montreal Château Champlain.

Whether they are sculptures, prints, illustrations, photographs, or tapestries, all are inspired by the theme of a winter garden, each artist has made their own interpretation. The works support the architectural vision of the renovation, creating different stories linked by the same theme. The messages are conveyed not only through the visuals but also through the materials and the choice of colors, allowing us to appreciate the beauty of a Montreal winter from the inside throughout all seasons.

The major works are located in the hotel lobby. One of them is a projection on a printed image by Canadian artist Sabrina Ratté. Evoking a winter landscape where a floating entity appears to be made of flesh and air, gravity and lightness - an ambiguous presence embracing its environment.

Margot Klingender's Sunflowers is an impressive sculpture based on the intimate observation of gardens in the Canadian artist’s neighborhood. She mimics the irregularity of the natural world, transforming it into something both naîve and dangerous.

Finally, the Montreal ceramic artist Pascale Girardin, known notably for her large-scale creations in prestigious locations around the world, created Drifts, a 59' plus bas-relief designed to greet guests in the lobby. Each curve was carefully shaped to emulate the generous and soft nature of a snowy blade.