PietriArchitectes rehabilitates a residential building and builds a wooden extension 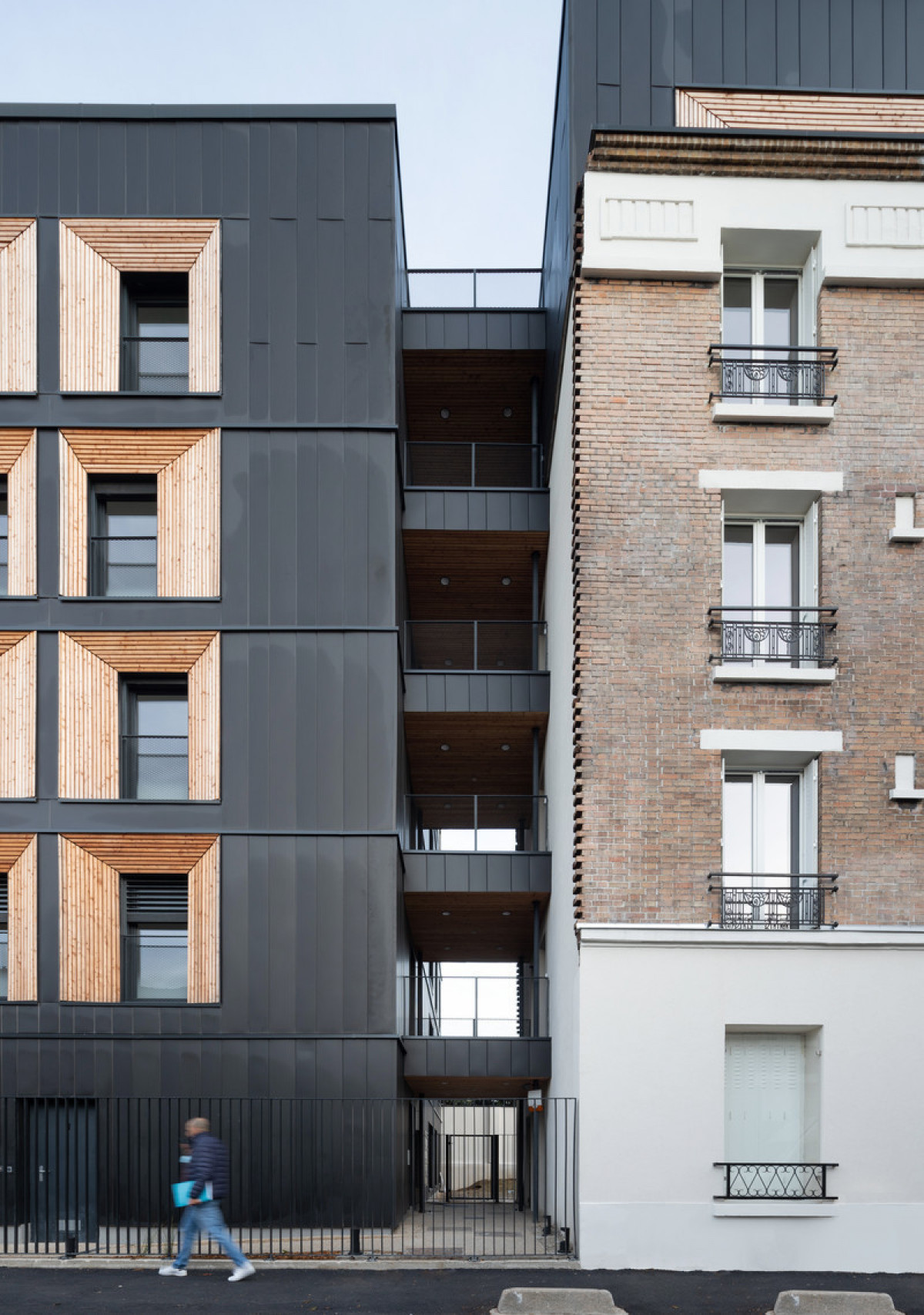 PietriArchitectes has designed a new housing project for the city of Aubervilliers named 36 Ferragus. Delivered in 2021, this rehabilitation project forms part of a requalification operation for the downtown neighbourhoods of Aubervilliers. The studio elected wood construction, and a prefabrication system for the extension, representative of two hugely popular construction methods able to meet the constraints of the project and its environment.

The city of Aubervilliers and the agglomeration, located in Seine-Saint-Denis, have launched a vast operation to requalify the downtown neighbourhoods by 2030. The ZAC Moutier was created in this context, the site of the operation of 36 Ferragus. This ZAC redraws the links between neighbourhoods through the removal of unsanitary habitats and the renovation or demolition of degraded habitats. The new projects form part of a long-term approach called «Aubervilliers 2030». The 36 Ferragus projects were established on the Heurtault block, situated on the edge of the city’s hyper centre and close to the «Mairie d’Aubervilliers» metro station. The urban fabric of this block is old and degraded, and its requalification aims to propose a new development to offer a better living environment to inhabitants.

The 36 Ferragus project is part of a heterogeneous sector consisting of collective buildings and individual houses. The small plot originally featured an early 20th-century residential building and garage. The decision was made to keep the building and build a new extension, rather than maintain the garage. This game of opposition between old and new constitutes the soul of the project. On the street side, the extension is set back from the preserved construction, providing inhabitants with space to access the buildings. A gap has been created between the two buildings, consisting of halls and walkways, that establishes a real physical link between the two buildings. This gap provides views between the volumes and opens the urban fabric while ensuring a perception of porosity towards the heart of the block.

The existing building has been completely renovated while conserving its original appearance. The cellar was lowered, and all floors were altered to ensure the safety and durability of the building. Echoing the extension, the main building features a one-storey elevation, carried out with the same aesthetic and technical characteristics as the extension.

Conducted on a small plot in a narrow street, the design of the project quickly focused on prefabrication, with wood construction proving to be the most suitable for meeting both the site constraints and sustainable development requirements. Wood prefabrication allows the setting up of a low-nuisance construction site for the neighbourhood, as well as the speed of execution thanks to final assembly being carried out on site. The principle of CLT construction has been adopted, a technique consisting of layers of solid wood stacked perpendicular to each other to create a structural material. Through this process, the extension rises on 4 floors and includes two dwellings per pallier, and the elevator, with a cage also designed of CLT wood.

The renovated building includes a staircase and one apartment per floor. The last level accommodates a wooden elevation built in prefabricated CLT wood, similar in all respects to the annex. The two main buildings are connected by an external footbridge. The street facade of the extension was designed as a tableau, a graphic element that contrasts with the weft and sobriety of the existing building and its original brick facade. In this way, a game of material, of contrast between hollow and full, is played between the anthracite zinc and the slatted wood, drawing skewed frames around the bay windows. In strong contrast, the two facades dialogue together thanks to the bridge between them and complement each other. Harmony is established between the two buildings through the choice of raw and natural materials dear to the architectural writing of PietriArchitectes.

The project provides 15 social housing units to the city of Aubervilliers. Both buildings have a double orientation and generous bays, ensuring that each apartment is bathed in light. The courtyard allows inhabitants of the dwellings to gaze upon a green space that is also visible from the street.