Atelier Barda proposed a concept to preserve the historic character of the home, yet with a new transition from historic elements 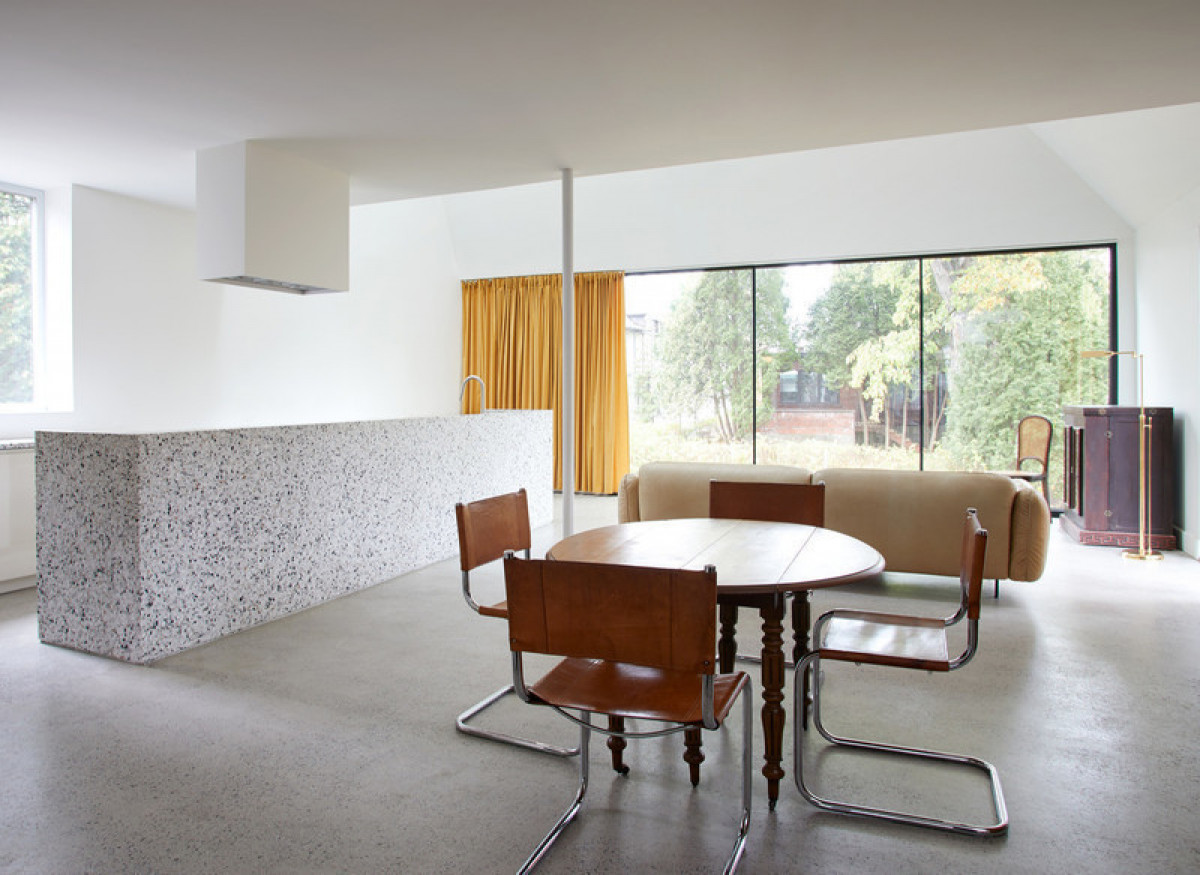 Atelier Barda completed the Queen Mary Residence, a rear extension project of a historic home in Montreal’s Hampstead district. The project involved the renovation of a Tudor-style home, built in 1927, to render it more suitable to the needs of a large family.

Within the context of a very restrictive regulatory framework designed to preserve the district’s historic qualities, Atelier Barda embraced the challenge of striking a delicate balance between historicism and purposeful use. The common spaces of the existing home’s interior, while once well-suited to its era and its external surroundings, were small and overly-partitioned, thus restricting open movement and limiting penetration of natural light. Additionally, the existing configuration fell short of accommodating the number of bedrooms required by the family.

“The neighborhood is characterized by homes that were built in a variety of traditional architectural styles,” explain the architects. “It is located in a residential area that is devoid of industrial and commercial installations, and removed from the high-density of Montreal’s downtown core.”

Transitioning from the past
Atelier Barda proposed a concept to preserve the historic character of the home, yet with a new transition from historic elements to a more intimate relationship between the home and its inhabitants. The original design of homes in the neighbourhood focused on the front façades of the built environment, with very little emphasis placed on the developmental potential of the rear areas of the properties. In keeping with that intention, Atelier Barda respected and preserved the design principles of the front façade, making only minor changes including window replacements and refurbished columns.

“The backyards of these homes have historically played a secondary role to their front yards and façades,” note the architects. “In a sense, our approach to this project is a critique of that rhetoric.”

Working behind the scenes
Atelier Barda’s approach relied heavily on intricate architectural techniques to create a mirror-like addition facing the rear. Attached to the rear of the home, the addition was angularly cut on the east side in order to preserve the architectural integrity of the front façade, and to ensure the visual continuance of its archetypal sloped roof. The north side of the new structure was similarly sloped to reduce shadows and to maximize sunlight in the rear yard.

By working behind the sightlines of the front façade, where the city’s regulatory framework is more permissive, Atelier Barda was granted greater freedom in their choice of materials. The firm opted for the nobility and functionality of custom-cut copper panelling for the rear extension’s roof, as opposed to the traditional asphalt shingles of the existing structure. Below the copper roofing, the design team applied burnt wood cladding, providing a natural protective layer against the elements.

Leveling the playing field
In order for the comprehensive design plan to empower the client to take charge of the largely underexploited rear of the property, Atelier Barda needed to address the property’s landscaping, including a problematic drainage issue. In endeavouring to create a more direct and intimate connection with the rear yard and the home’s elevated ground floor, the team opted for a landscaped counter slope that seamlessly transitions from a newly-built terrace to the garden area. Located on the east side of the home, the new terrace sits on top of a newly created garage, and is semi-enclosed on three sides, with a rear-oriented opening focusing attention towards the landscaped slope and rear garden area.

Contemporary transitions
The internal portion of the newly designed extension focused on a flow of contrasts, reflecting the historic charm of the home and a progression of time and life for the family. Original design elements and rooms appointed with ancestral furnishings intentionally contrast with the modern ambiance of the 360 sq. ft. extension, symbolically embodying the personal growth of the home’s inhabitants. The home’s kitchen and dining area were transplanted to the new extension, resulting in a very contemporary, open space that is highlighted by polished, terrazzo-style concrete floors, white walls, and high ceilings. Natural light brightens the room, infused into the space through expansive openings, as well as through the newly created skylight.

“The project respects the historic essence and cachet of the home, but provides the family with an ambiance more conducive to the present,” conclude the architects. “It embraces the best of both worlds, with the rear of the home now having renewed purpose as a modern, casual space with garden views.” 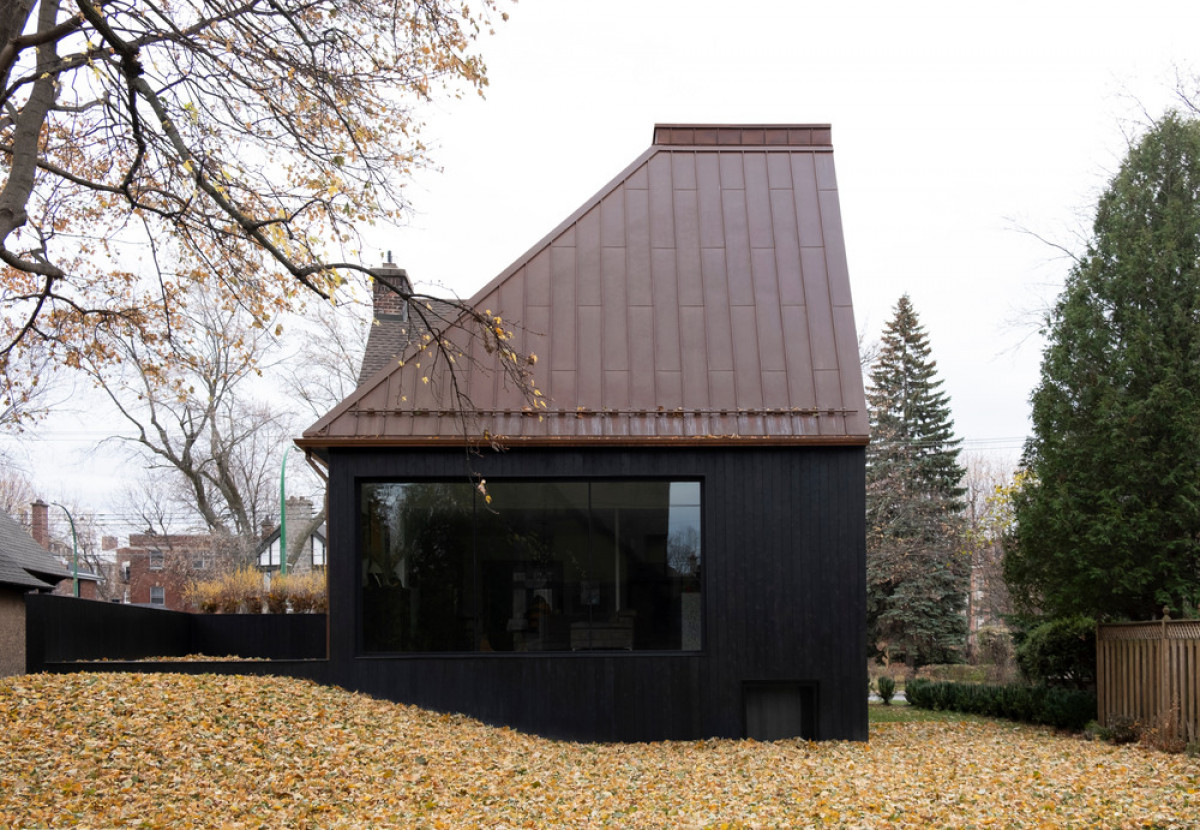 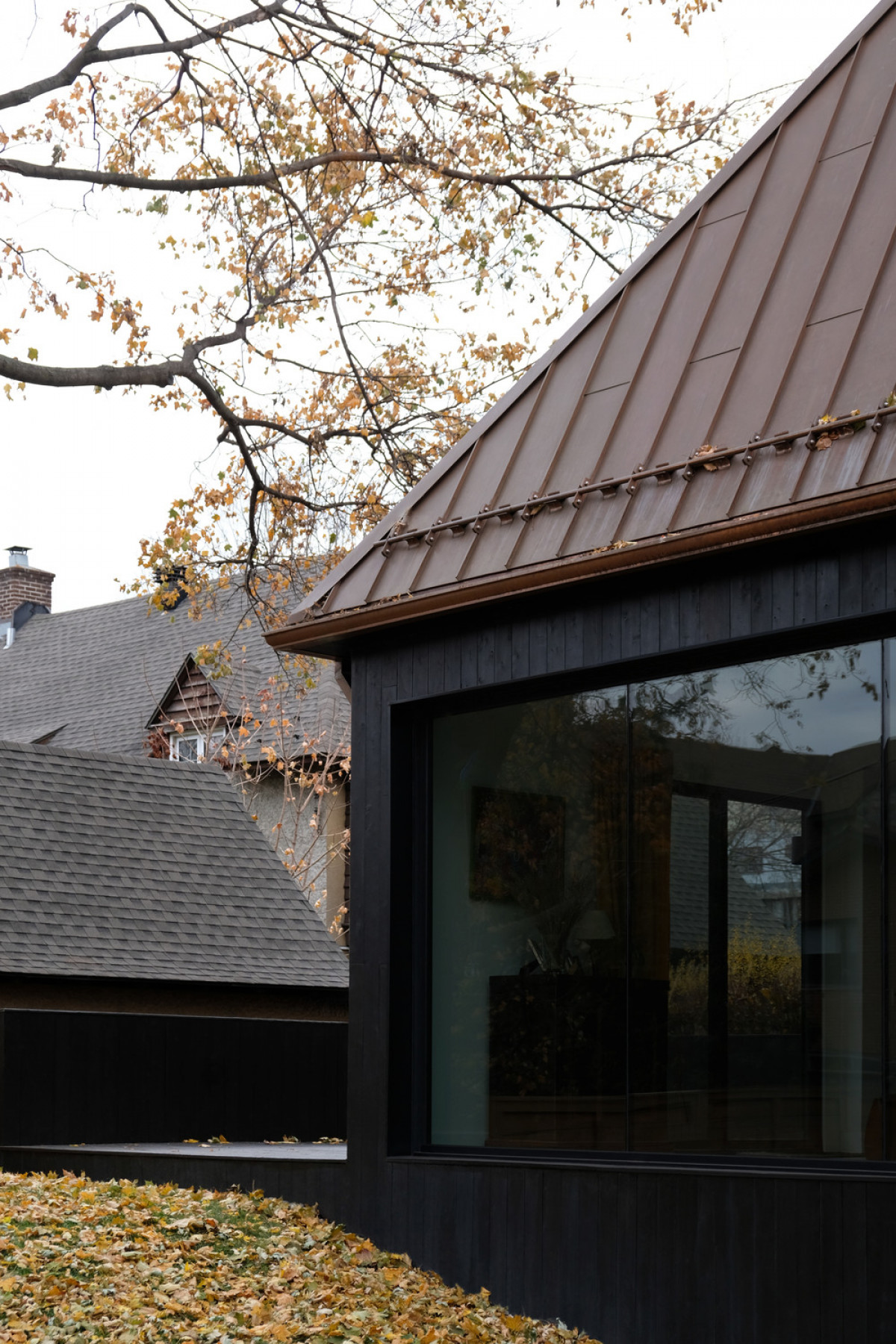 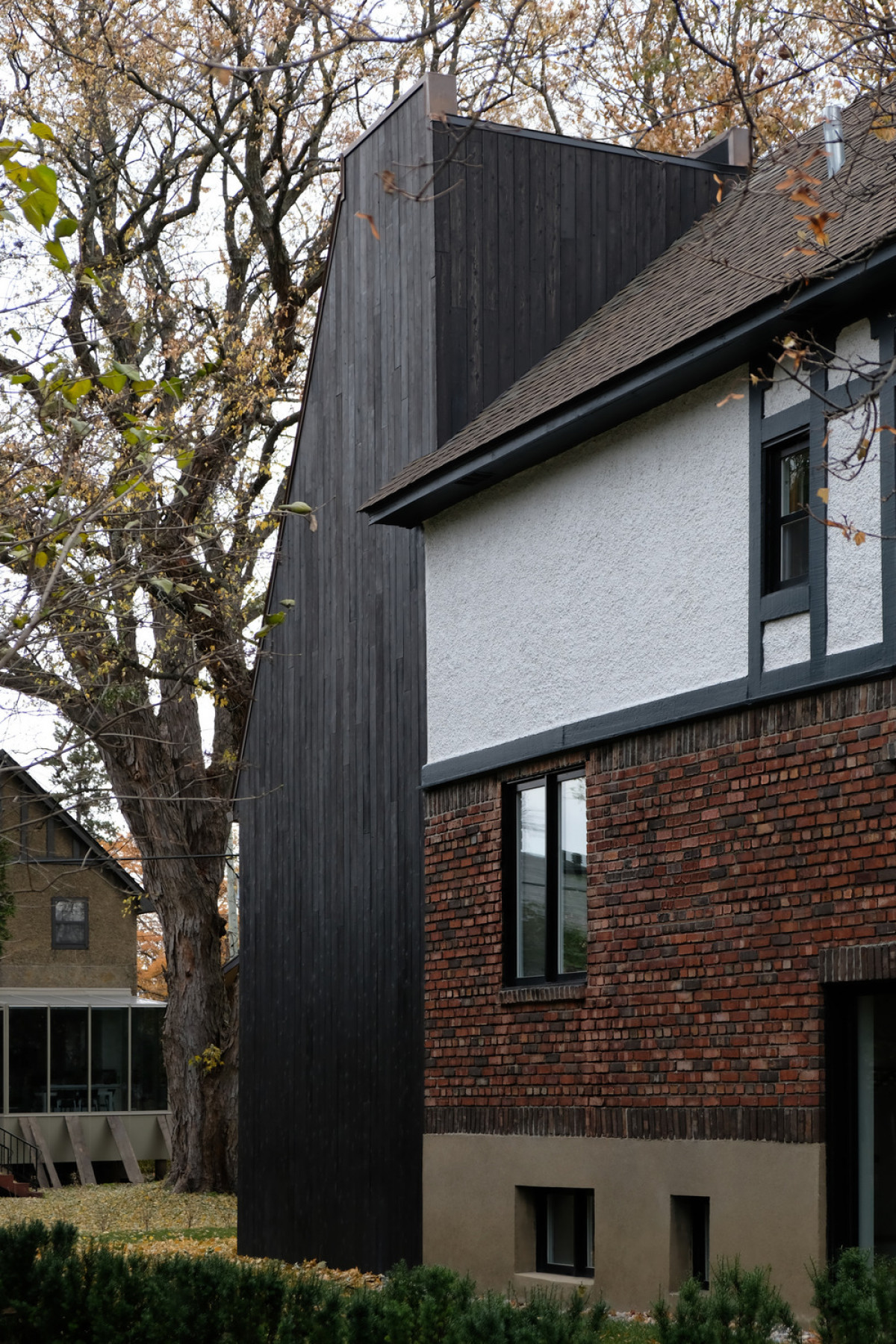 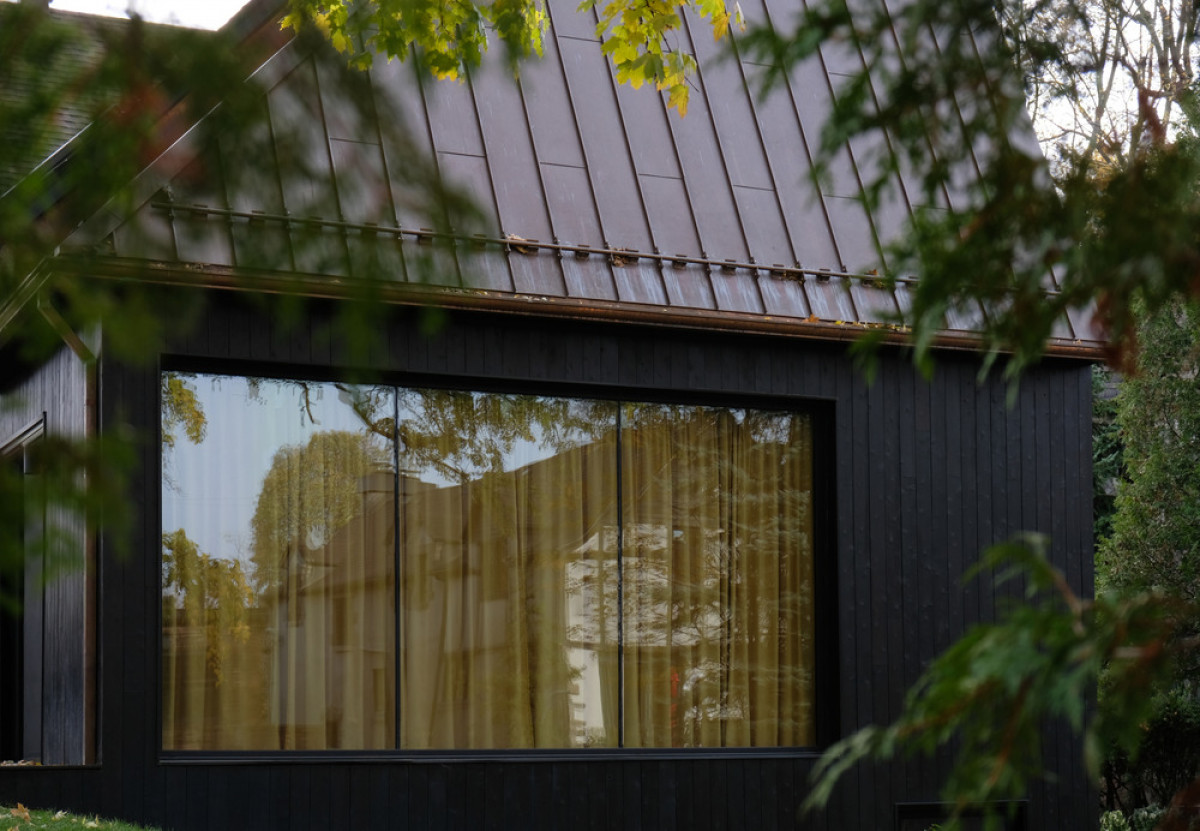 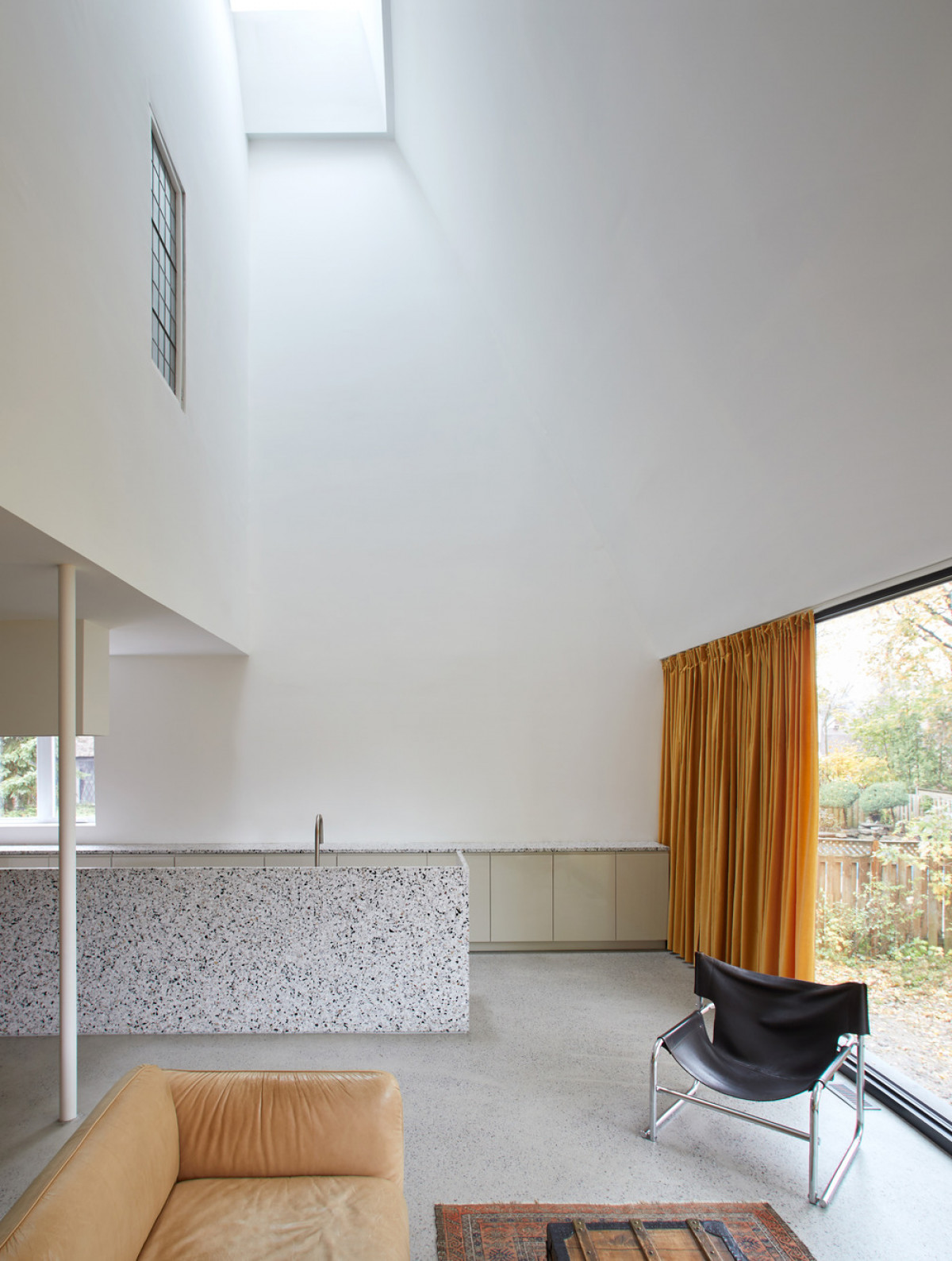 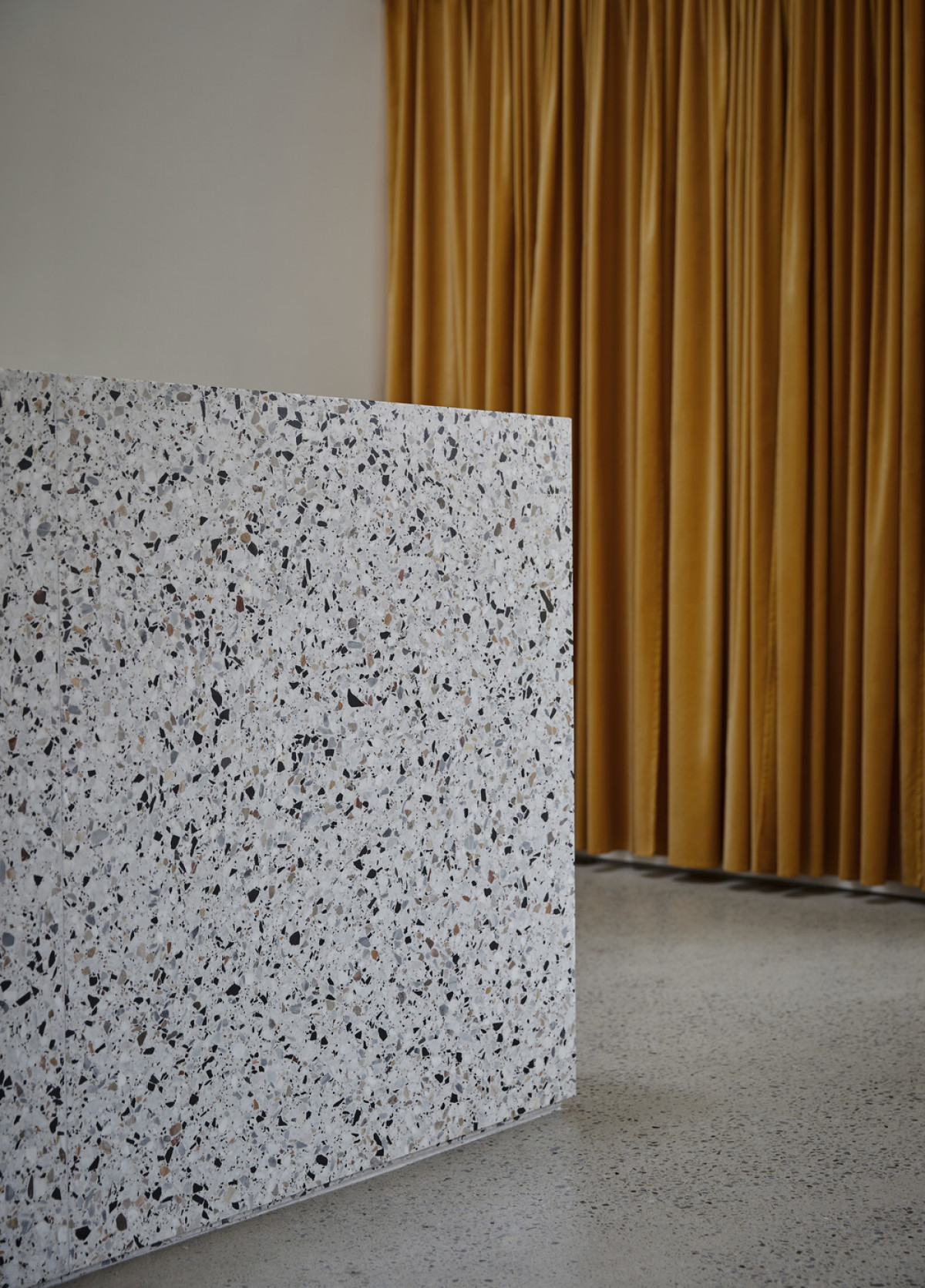 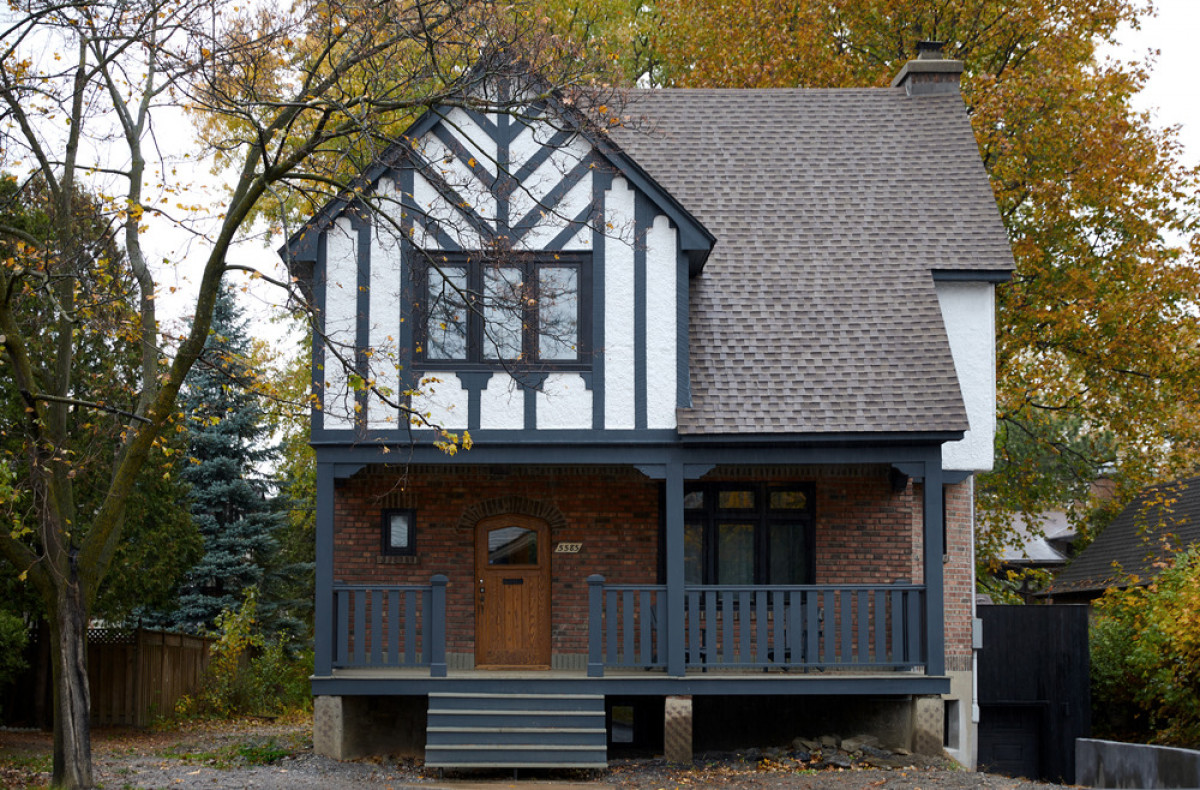 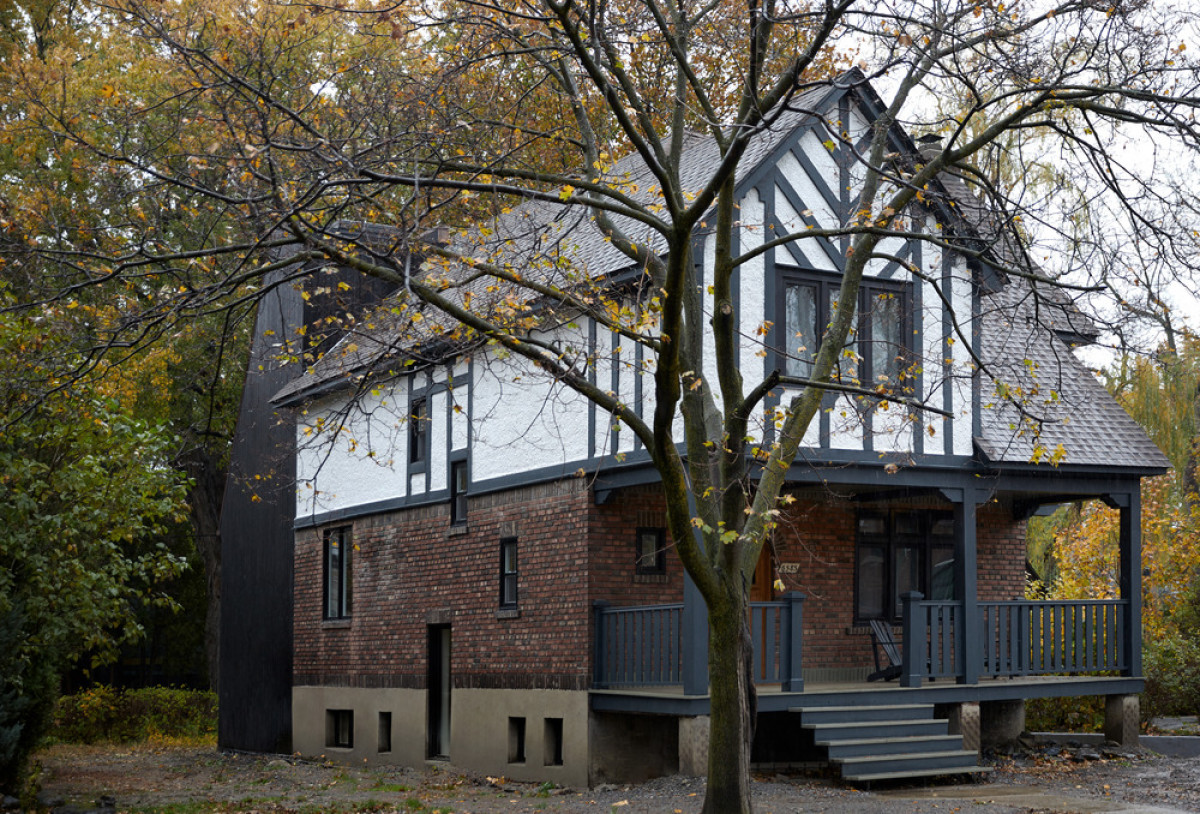 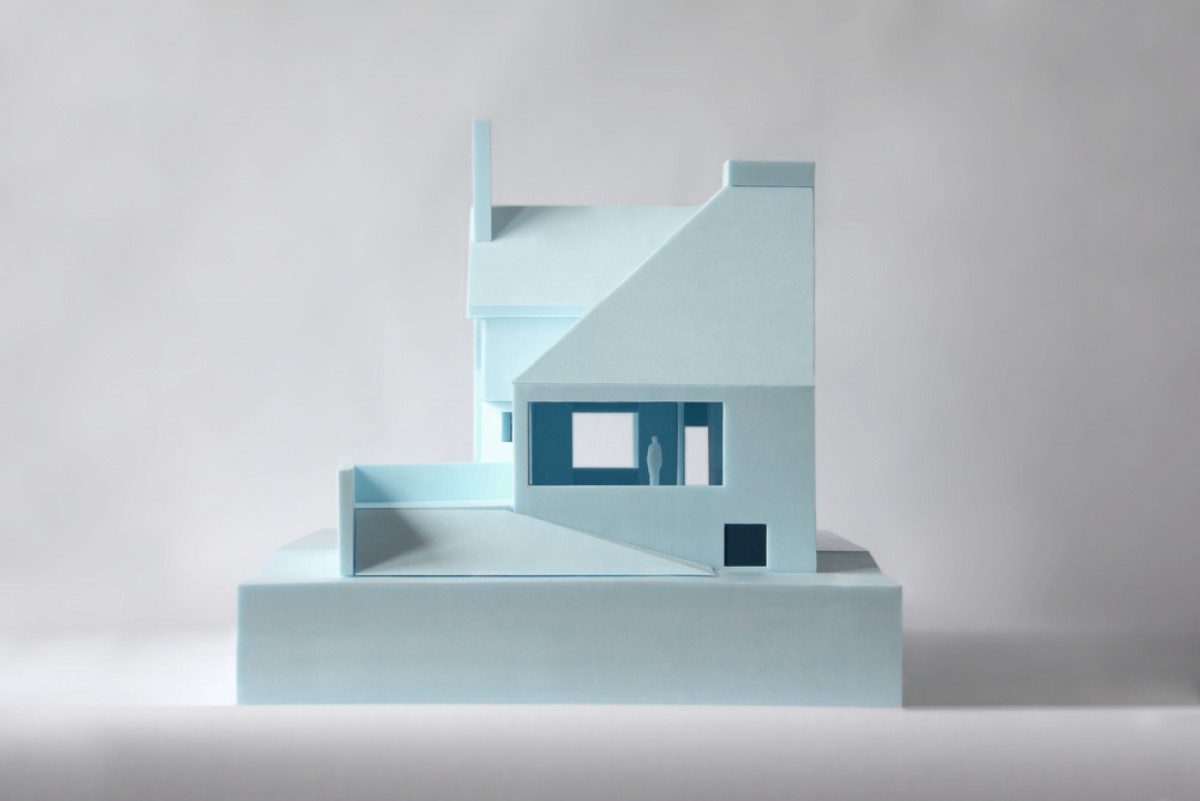 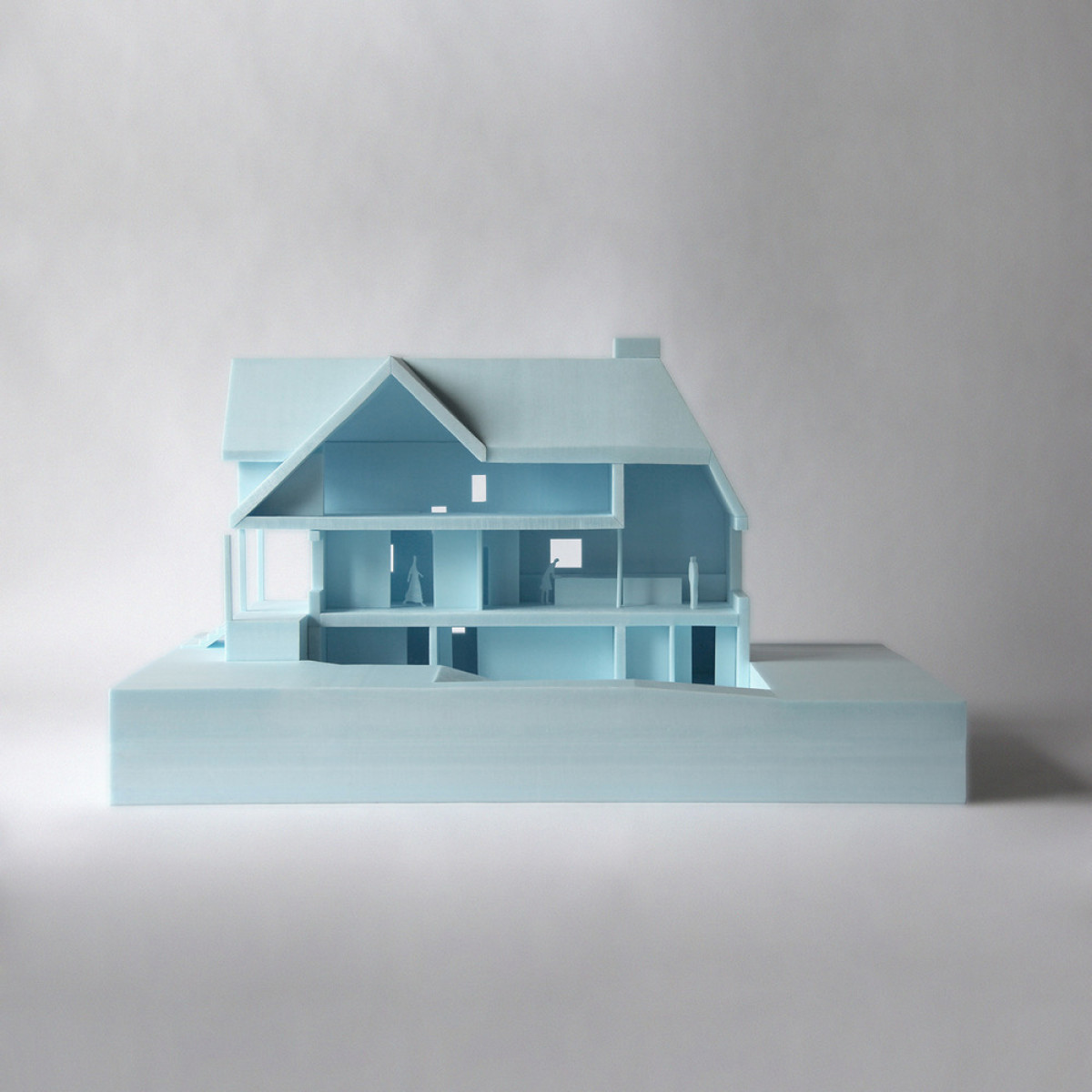