The main design challenge was to gain approval for a bold, contemporary architectural statement in a village famed for its historical residences. 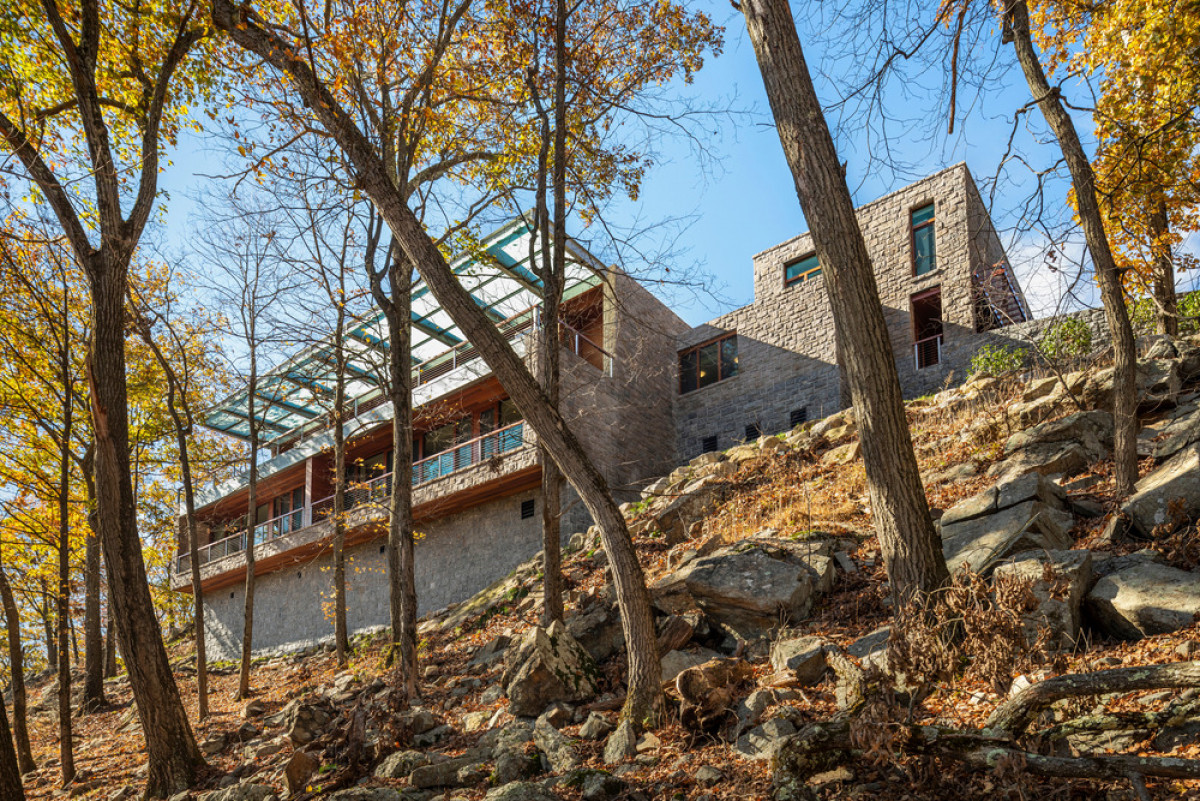 Alexander Gorlin Architects was commissioned to create a part-time residence for a large family that would be both private and unobtrusive. The main design challenge was to gain approval for a bold, contemporary architectural statement in a village famed for its historical residences. To achieve that balance, the house was nestled into the rock of its steeply sloped site and utilized locally quarried stone to blend into its surroundings. Many sustainable design strategies were implemented to reduce the environmental impact of the house and its visual impact on the local community. The resulting home sets a new architectural standard for its community, and demonstrates how the house construction process can be conducted in a minimally impactful way.

Clad in a local granite of salmon and gray, with a green roof, and mahogany windows with nonreflective glass, the house dissolves into its surroundings from a distance. Arriving up a winding driveway, the house is set into a natural rock shelf, allowing for an L-shaped plan that wraps around an internal rock garden, and entry into the level of living space; kitchen, dining, and living areas. The entry hall, paneled in reclaimed wood, opens into a hall looking into the garden. A cantilevered frosted glass canopy extends over the terrace to allow for outside living in inclement weather. The lower level includes all bedrooms and private spaces, each with a private terrace looking into the forest. The garage, guest wing, and playroom are in the adjoining wing of the plan. From below, the house takes on the appearance of a castle in the woods, emerging from its rugged and rustic surroundings.

Careful attention was paid to ensure the preservation of the site’s precipice and natural vegetation. Both the location and orientation of the plan were adjusted multiple times to minimize the removal of trees. Similarly, the driveway’s path weaves around older growth trees to preserve them. The building’s footprint was minimized by incorporating the mechanical room underneath the house, rather than adjacent to it. In total, 60% of the site was left untouched to allow the clients to enjoy the landscape’s wild character.

The design incorporated multiple sustainable design features in order to minimize the house’s impact on its environment. Those features included a drainage system along the driveway that redirects rainwater runoff to supply the courtyard garden’s irrigation system. A green roof replaced vegetation removed by construction, and heavy machinery was brought onto the site over protective boards in order to minimize damage to the landscape itself. These initiatives contributed to a construction process that was carried out with as minimal impact to the site as possible.

This house establishes a new contemporary architectural vernacular for a community characterized by 1880s Tudor-style historic homes. This was done in as sensitive a fashion as possible, and in collaboration with the town’s architectural review board.