First of five buildings planned for the ECR complex in Sopot, Poland 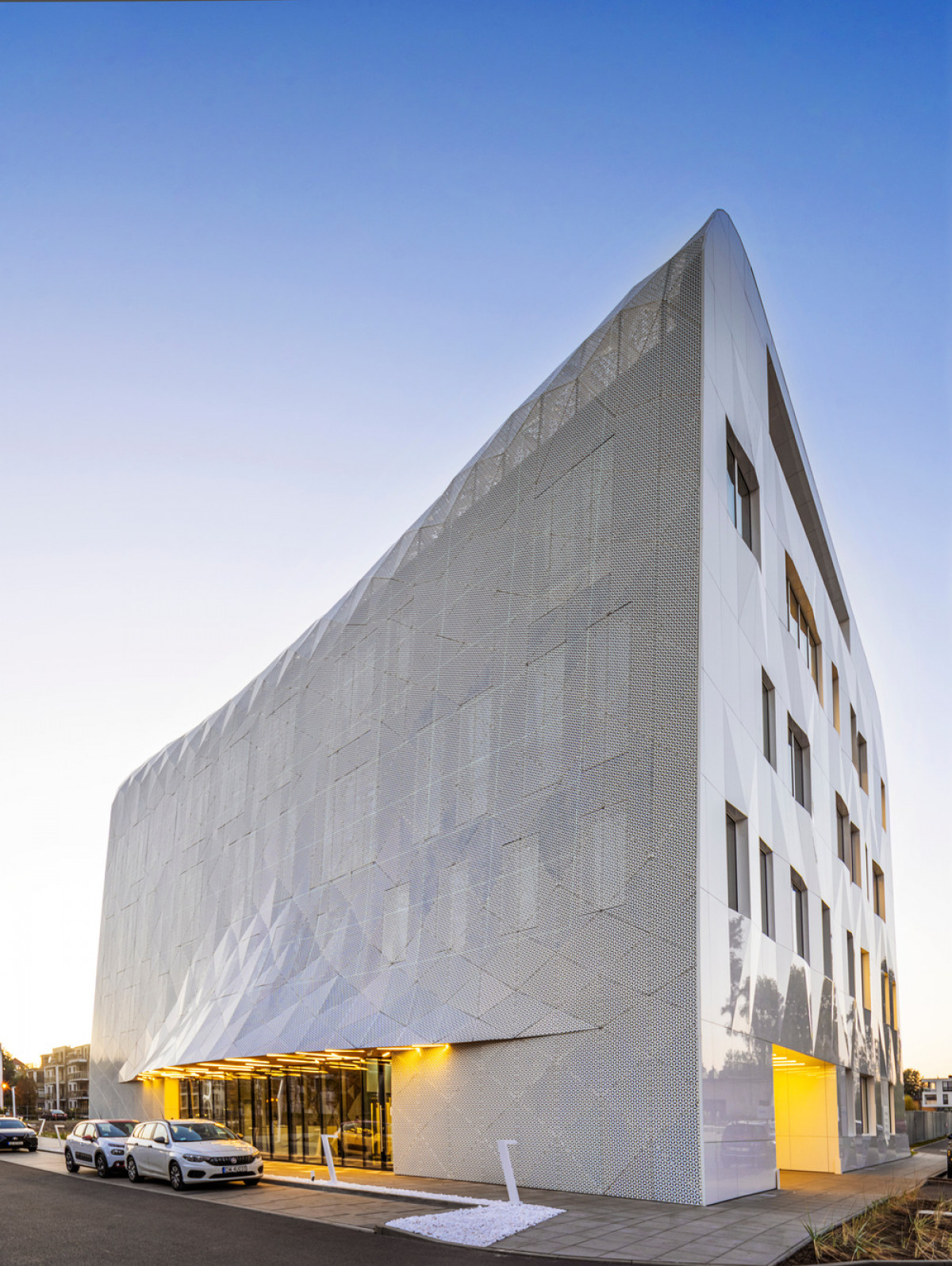 Wave One in Sopot, Poland by FAAB Architektura

Wave One, of the European Center for Families, is located 400 meters from the Baltic Sea in what is historically known as a health resort town. The concept is derived from the complexity of sea waves and the local vernacular of carved ornamental detailing on facade elements. Drawing upon this, the architects created a site concept composed of five inter-related buildings, reminiscent of waves. Wave One, the first to be built after a lengthy design and construction process, encompasses specialized medical laboratories, including SARS-CoV-2 testing labs, a research & development centre, and administration spaces.

Form
The white perforated facade, enfolding Wave One, was partly inspired by a series of photographs by Pierre Carreau, titled AquaViva. The architects analyzed the geometric complexity of the sea waves captured by the photographer. The arched 3D forms, frozen in time, were translated into an architectural language that shaped the building’s final form. With 1,362 perforated triangular panels, the facade, just like a wave, bend at its crest, the top of the building.

The perforated panels are a symbolic gesture referencing:

1) the local tradition of placing ornamental details carved in wood on building facades, and

2) flower of life, an ancient motif credited with healing powers, befitting the healthcare function of the investment.

The perforations made it possible to elicit an airiness and dissipation of the building in space, particularly visible in the upper realm of the facade.

The East/West elevations take on 3D form, with triangular panels of sintered white ceramics skewing and reflecting sunlight onto the pavement. They create a transient detail, enlivening the immediate surroundings of the building.

Equally, curvature - a reference to the concavity of a sea wave - inspired the shape of the building mass. The amply curved canopy over the South entrance was digitally 3D modelled by the architects and was then submitted to the local contractors for the preparation of one-to-one mock-ups. Adjustments were made on-site in order to create a seamless union with adjacent panels and to ensure the fluidity of the perforated pattern. This was a painstaking task, given that curvature and deviation from the vertical are along both axes of the facade, not excluding the additional presence of operable shutters. 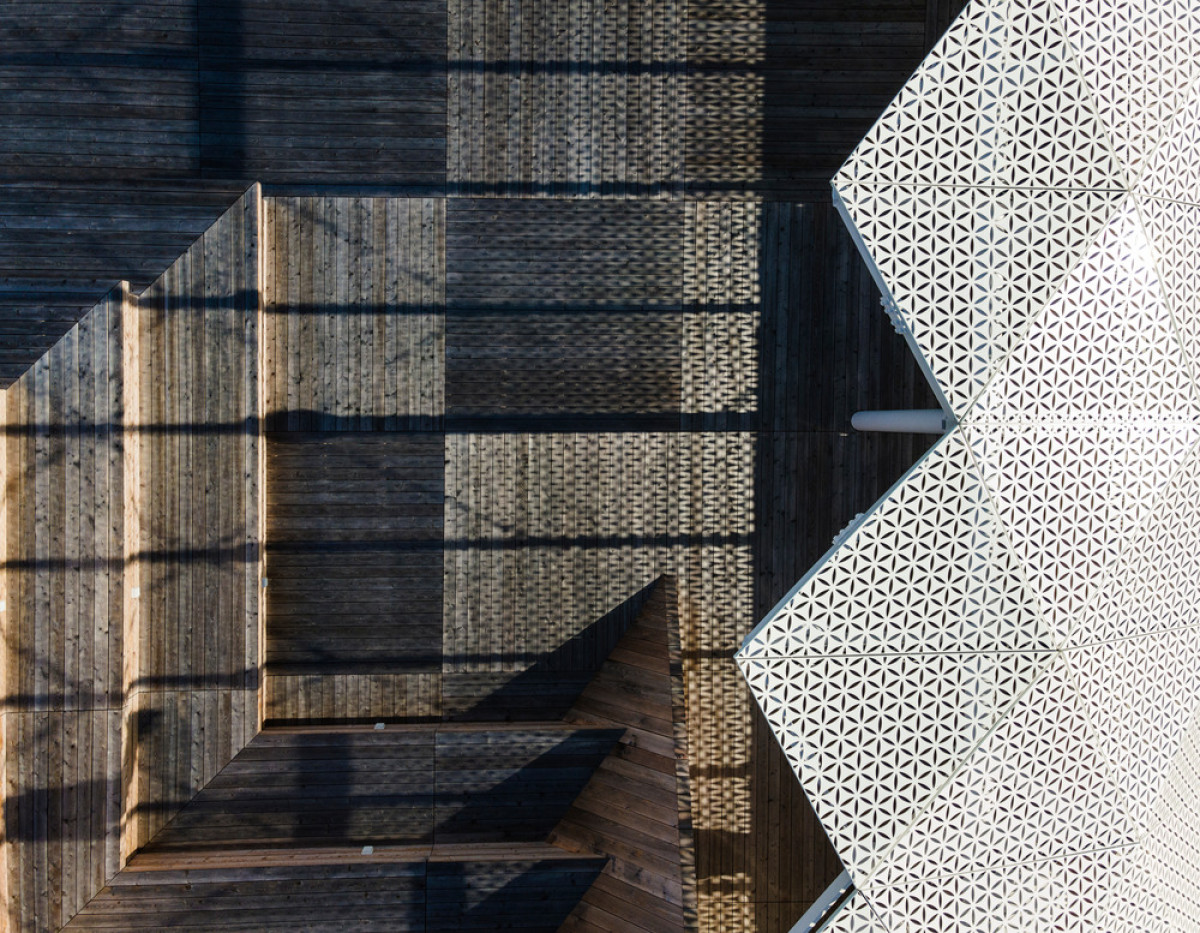 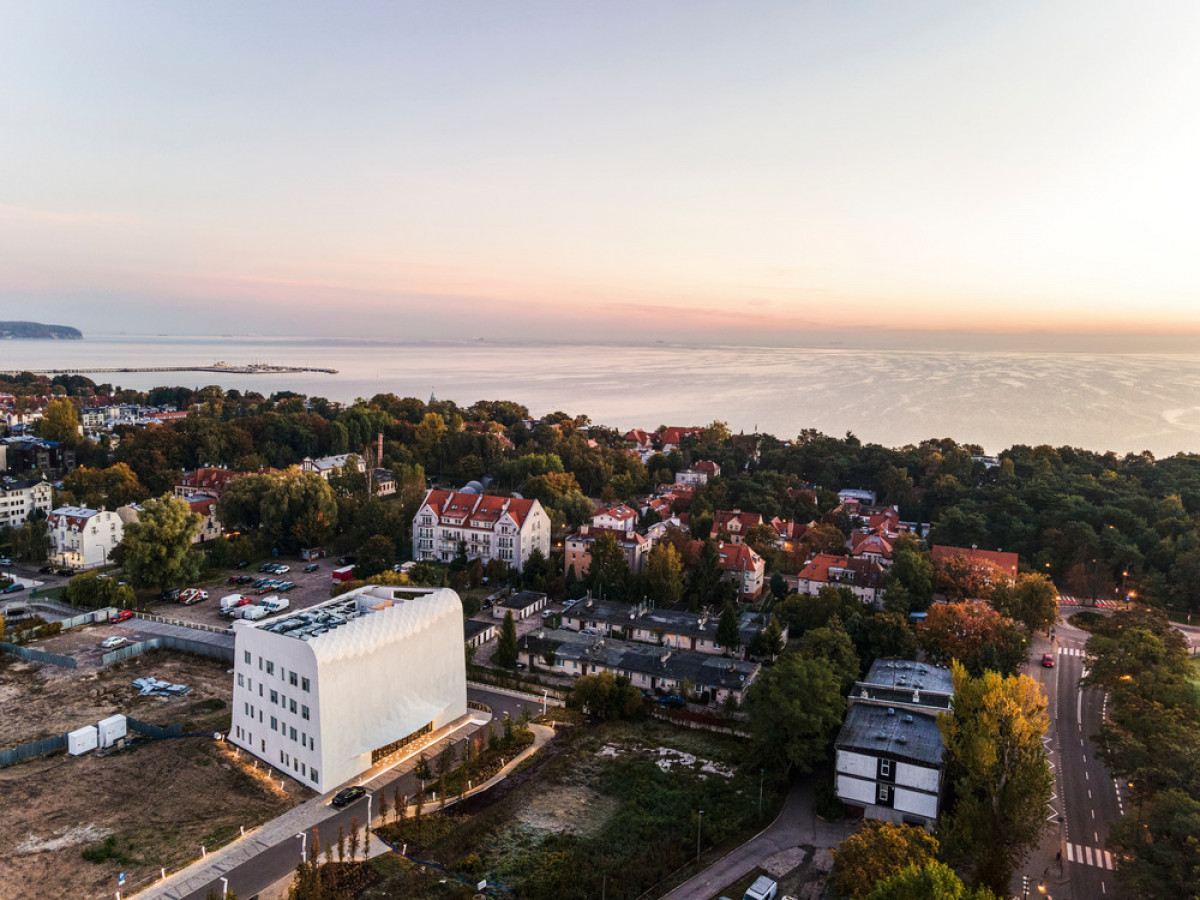 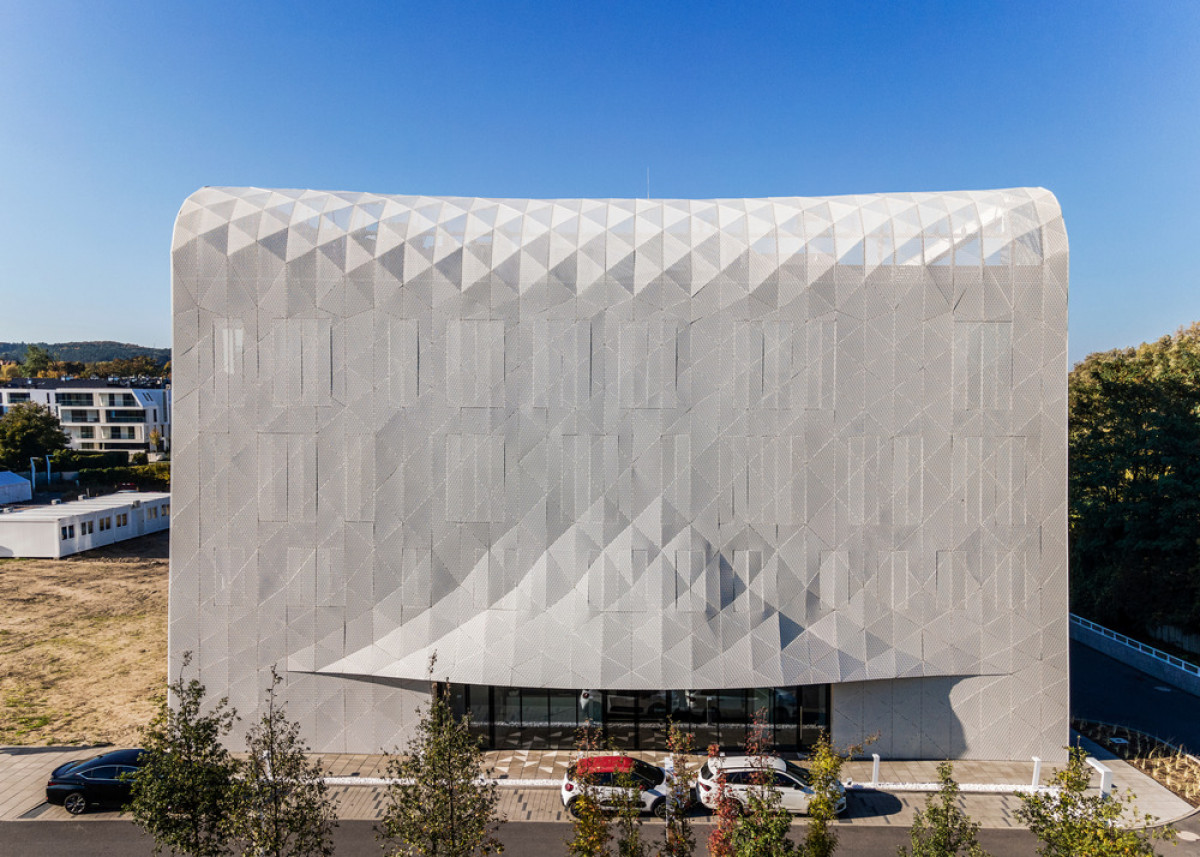 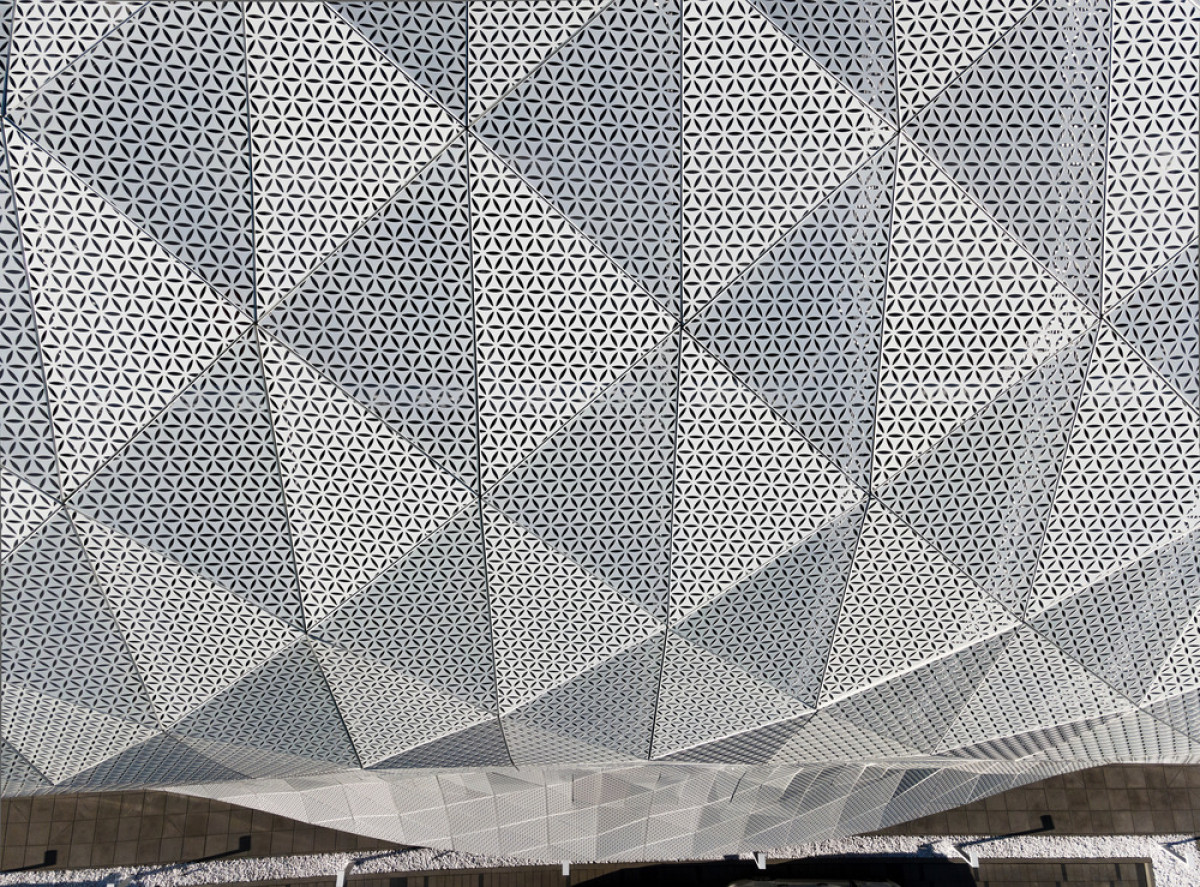 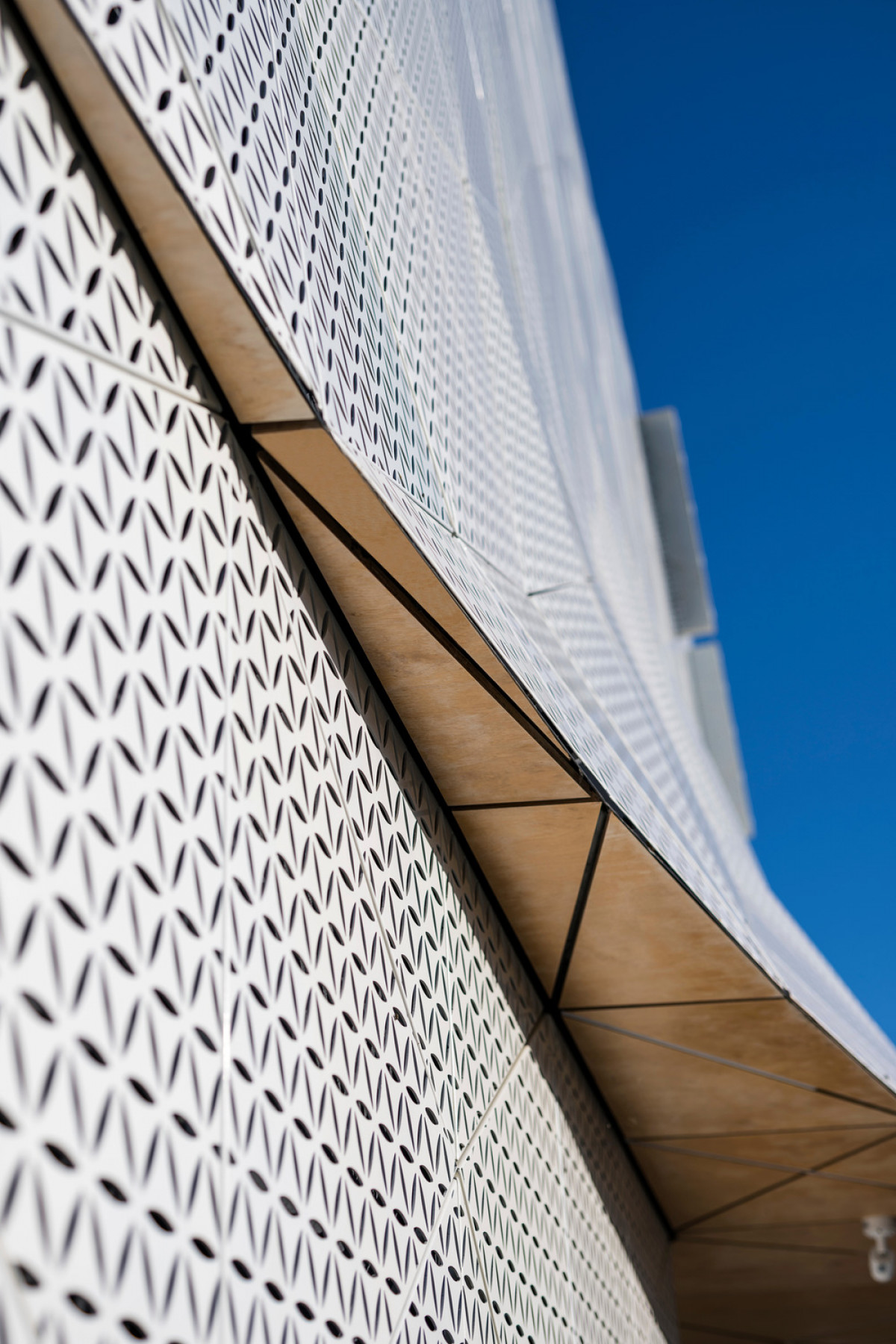 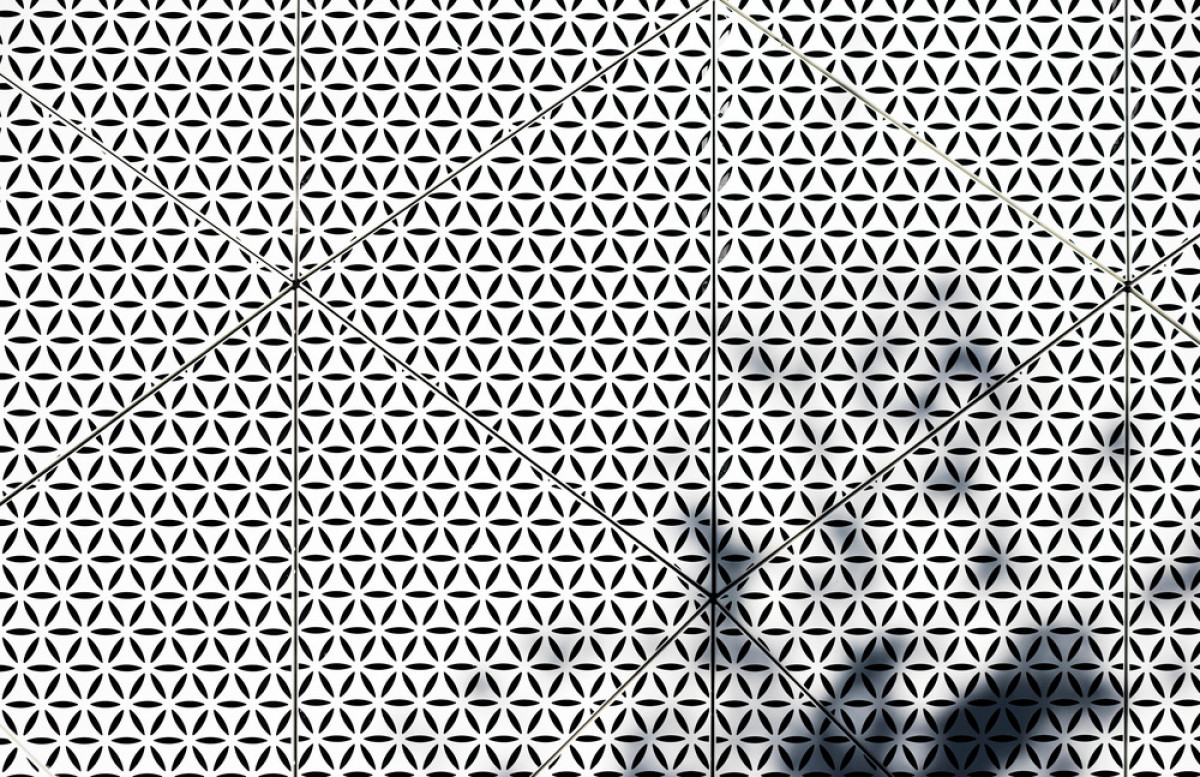 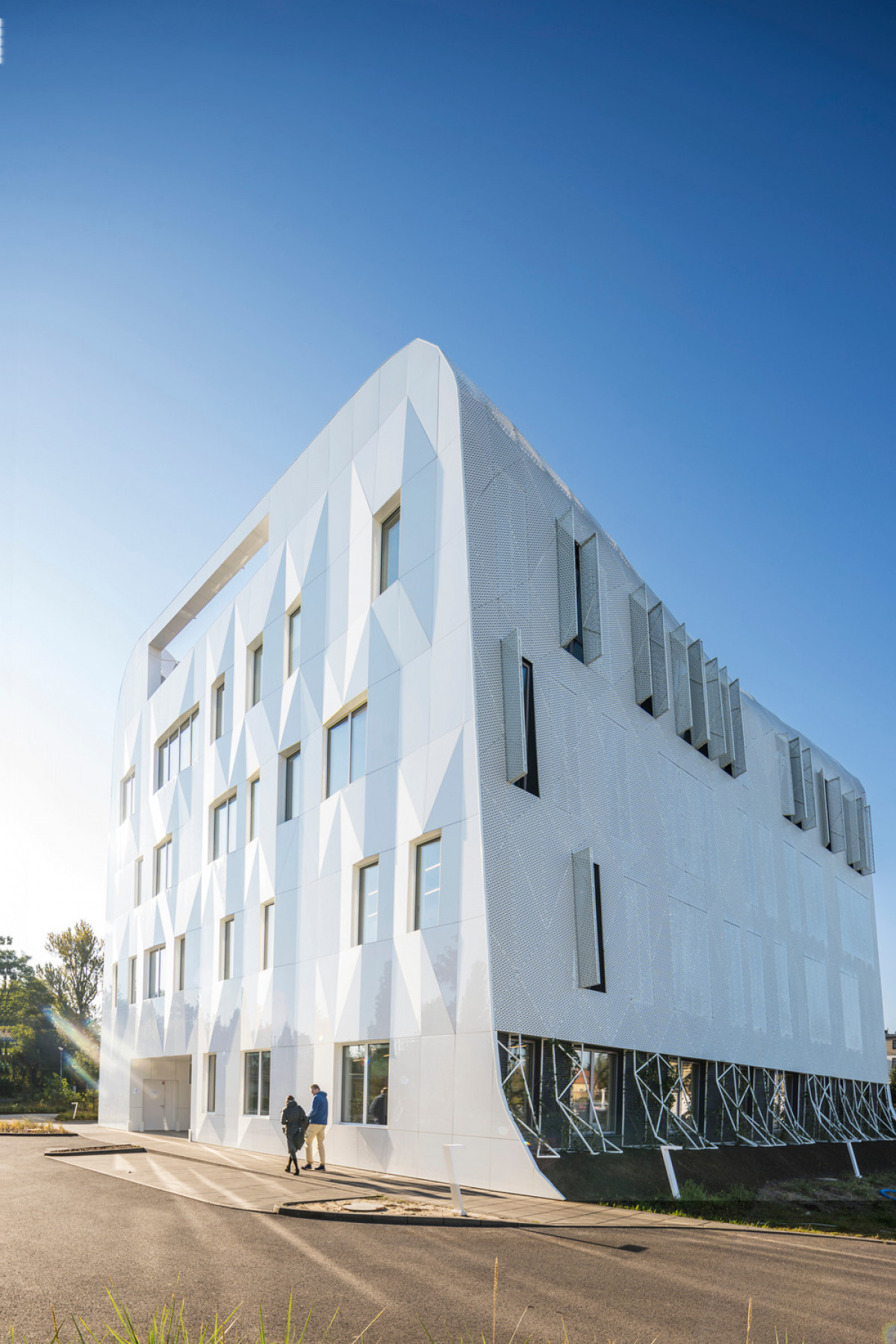 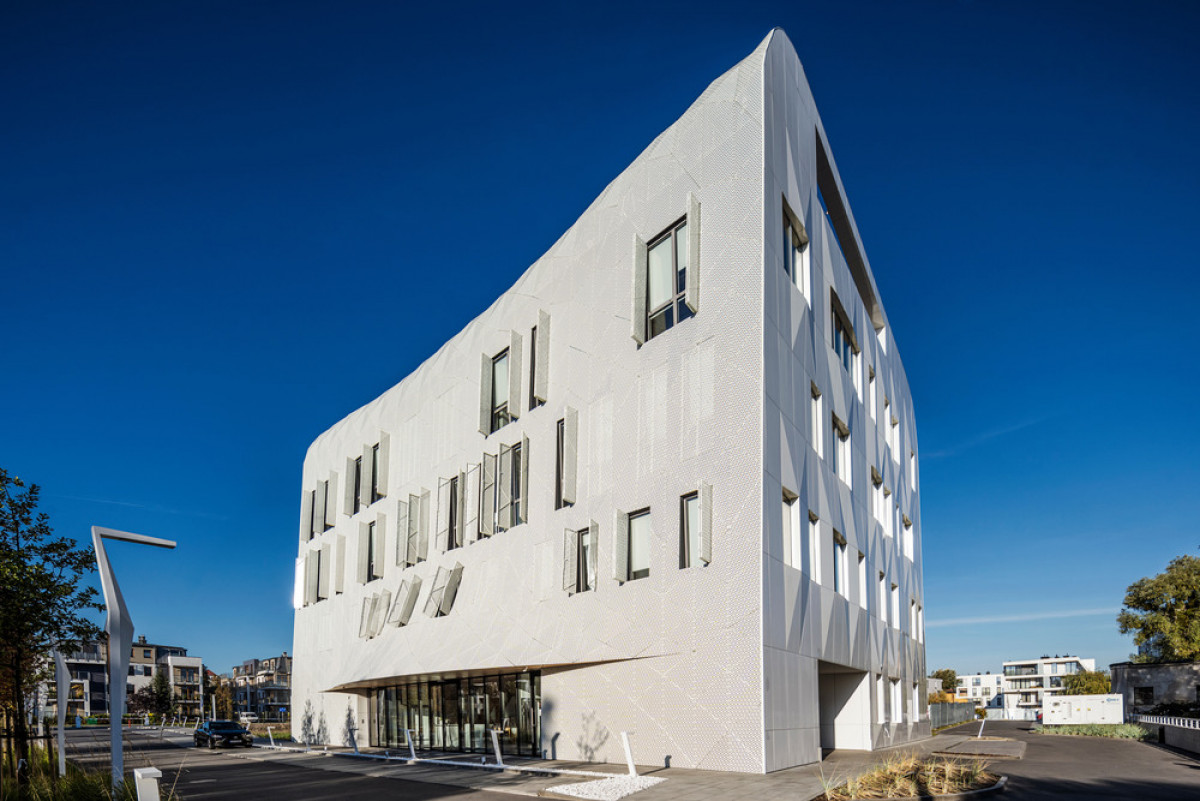 Function per floor
Below ground: cold and reagent stores, server, and technical rooms.

First floor: molecular biology laboratory carrying out research in the field of genetics. Cytology, cytogenetics, and virological laboratory are adjacent.

Second floor: research and development centre. This centre also creates specialized software to streamline implementation and increase the accessibility of medical procedures. The software is based on artificial intelligence and machine learning technologies.

Third floor: Investor headquarters and offices intended for the development of research projects.

Terrace: divided into technical and recreational spaces by an acoustically insulating wall. The recreational terrace is available to all employees and provides workplace well-being and a visual connection to the Baltic Sea.

Due to the difficult situation in 2020 (availability of testing facilities), a decision was made during construction to convert part of the space into a SARS-CoV-2 diagnostics lab. This laboratory continues to be used to determine new types of mutations. A vaccination point was organized in the building and is used by the inhabitants of Sopot.

Impact
The ecological solutions selected for the project result directly from local conditions and respond to the actual demand determined by the function of the building. Due to the difficult construction conditions of Lower Sopot, including flooding, high groundwater levels, and the presence of non-bearing soil, the site remained undeveloped for years.

In a facility with such a high saturation of technological equipment, many of which have to work 24 hours a day, it is very important to protect the rooms from overheating. Overly high temperatures inside the building not only cause discomfort but can also trigger a sudden shutdown of laboratory equipment. This, in turn, usually leads to the discontinuity of the analysis cycle, as well as the loss of precious research material.

In order to avoid such threats, and to prevent enlarging the cooling systems, a number of passive solutions were used. For instance, the architects resigned from large glass surfaces. Instead, the surface area of the designed windows provides optimal natural lighting conditions for the laboratory rooms. The largest room, in which the technological line generating the greatest amount of heat was placed, is located on the North side.

Furthermore, the building façade consists of two layers. The outer layer of the facade acts as a continuous protective barrier over the building, shielding the exterior wall from heating up, and thus preventing the interior rooms from overheating. This barrier also has a positive effect on its surroundings and guards against the urban heat island phenomenon.

Several solutions to rainwater management were introduced. An extensive rainwater retention system and buffer tank were installed. The water collection from the tank is used to flush the toilets, thereby limiting the use of water from the municipal network. Additionally, to avert rainwater contamination, external wooden elements were used that do not require chemical treatments.

The interiors, in particular the lab rooms, were designed to adapt to the frequent technological advances in medical diagnostic services that will inevitably be introduced in the future. As such, rooms, where laboratory tests are performed inside closed automated lab devices, have exposed ceiling installations. Partition walls in the laboratories are built in a way to ease their dismantling. The resin floor is easy to repair and supplement in the event of a room rearrangement. The structure of the building itself allows for the implementation of new system shafts and, in those already made, there is a reserve for new installations. A reserve was also left for the installation of new systems on the technical terrace. All of these procedures will significantly reduce the time needed to install new laboratory equipment in the future.

Conclusion
Construction continues on three out of five buildings planned for the site. The final building (Wave Three) is in the design phase. Once completed, the ECR complex of health care facilities will comprise an outpatient hospital with an operating theatre, a treatment unit and an IVF laboratory (Wave Two), a specialist inpatient hospital with a gynaecology and obstetrics profile, delivery and neonatal unit (Wave Three), and a rehabilitation centre including hyperbaric and cryo chambers (Wave Four&Five). Construction is expected to be completed in 2023.