Case of Agraharams of Kerala 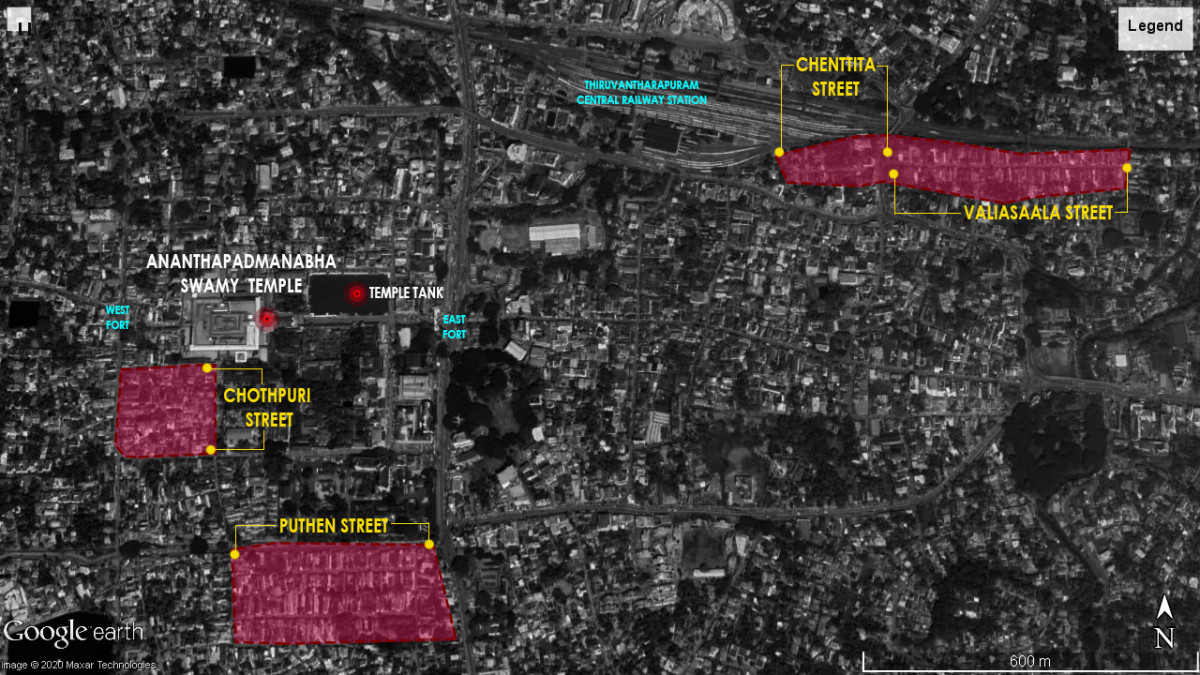 Today, old housing stocks are fast disappearing due to modernization to make way for bigger, swankier apartments and modern houses. With the younger generation migrating to cities or other countries across the world in search of jobs, these places now stand alone with only memories of a way of life.

Urbanisation has made the performance of elaborate rituals shorter, and there is a marked change in modern lifestyle that can no longer be adapted to the theses spaces and its community. Privacy is valued a lot more today are which means common walls are a source of discomfort and common wells, no longer in use with every household having a plumbing system. Anti-social elements are also posing a threat to the agraharam residents. In this process, the sense of belonging, the sense of identity, the comfort and a security of a familiar neighbourhood is being lost.

Agraharam: Rows of houses on either side of the road and the temple to the village God at the centre, thus resembling a garland around the temple.

According to the traditional Hindu practice of architecture and town planning, Agraharam is held to be two rows of houses running north-south on either side of a road at one end of which would be a temple to Shiva and at the other end, a temple to Vishnu.

After independence most of the great temples came under the control of the new government and thus the traditional system of management changed, with this many of the Brahmins who were traditionally associated with the temple lost their job. This in turn made them to look for alternative ways of living. Many of the agraharams began to run catering service, supplying homemade vegetarian food. A few of them were even converted into hotels; the thinna got converted into shops.

These agraharam settlements of today have undergone transformation. Many youngsters from the agraharams migrated out in search of better employment opportunities .The transformation of the old form of agraharams had started then. With the emigration of the local Brahmin community, the agraharams were often occupied by the members of other castes. The remaining Brahmins shut themselves away from the new occupants. The open thinna in front of the agraharams was closed and the once active space of interaction and heated Vedic discussion have been lost forever.

How can urban design strategies mitigate the issues?

To conserve and reserve these spaces and protect the cultural values, it is necessary to remove high-end real estate policies like TDR (Transfer of Development Rights), bifurcation and plot amalgamations that would completely swipe away the existence of these spaces that resembles centuries of tradition.

In addition, interventions for place-making and protection of the heritage the place holds and converting the space as an economy generator by adapting steps like adaptive reuse can play a key role.

From the architectural point of view the agraharams in Kerala are unique and different from the other agraharam settlements of the great temple towns of Tamilnadu, at the same time it draws a contrasting picture of the traditional Kerala style of architecture as well.

Adequate research in the traditional building design and the socio-cultural values it holds so as to understand its importance and adapt the changing needs and taken care by an organisation for the benefits. In all the cities where these kind of settlements were prominent, the governments and independent heritage conservation bodies should drive some efforts by spreading awareness and providing incentives to people to preserve unique charm of these timeless spaces.

Social aspect and the change

Introduction of new technologies has reduced the use of many elements like tanks, wells and most importantly the central courtyard which has served as a major source of light and ventilation. Houses that were renovated with R.C.C. have removed the traditional look of the village. Reduction in the size of the courtyard and transformation to other use provides less lighting and ventilation.

Nowadays it is very hard to find joint families and at a point is vanishing slowly and mostly gets converted to nuclear families. Many of the houses are kept locked most of the time as people tend to live in abroad.

Agraharam and similar old housing stocks face major challenges due to the rapid urbanization and climate change. Hence there is a need to understand the various resources that will be required for undergoing constant changes and accommodating changes for future generations is a much-required factor for the housing sector, where the idea of flexibility for inhabitants, associations and other local authorities in providing a choice needs to get addressed in this sector. Hence when designing houses it is seen that it accommodates the change in both usages and for the users too.

Flexibility can be achieved through Function flexibility and Adaptability. Functional flexibility allows for changes in the already existing space, wherein space is intended to perform various functions. Adaptable flexibility has its own limitations as to the satisfaction achieved based on the spatial requirements. Need to estimate the extent of accommodating space change. Any space has always its relation to its surrounding where the activity is linked to its function for giving a better solution for the future generations. Hence, we need to consider space planning in all aspects which has infinite opportunities.

The article was submitted by Design Dekko member, Architect, Urban Designer and Artist, Ashwathi Vinod. The views expressed are of authors own.