Marieville Celebrates Its Past While Building for the Future

How did so many outstanding theaters, museums, and public libraries manage to get built-in Québec over the last two decades? 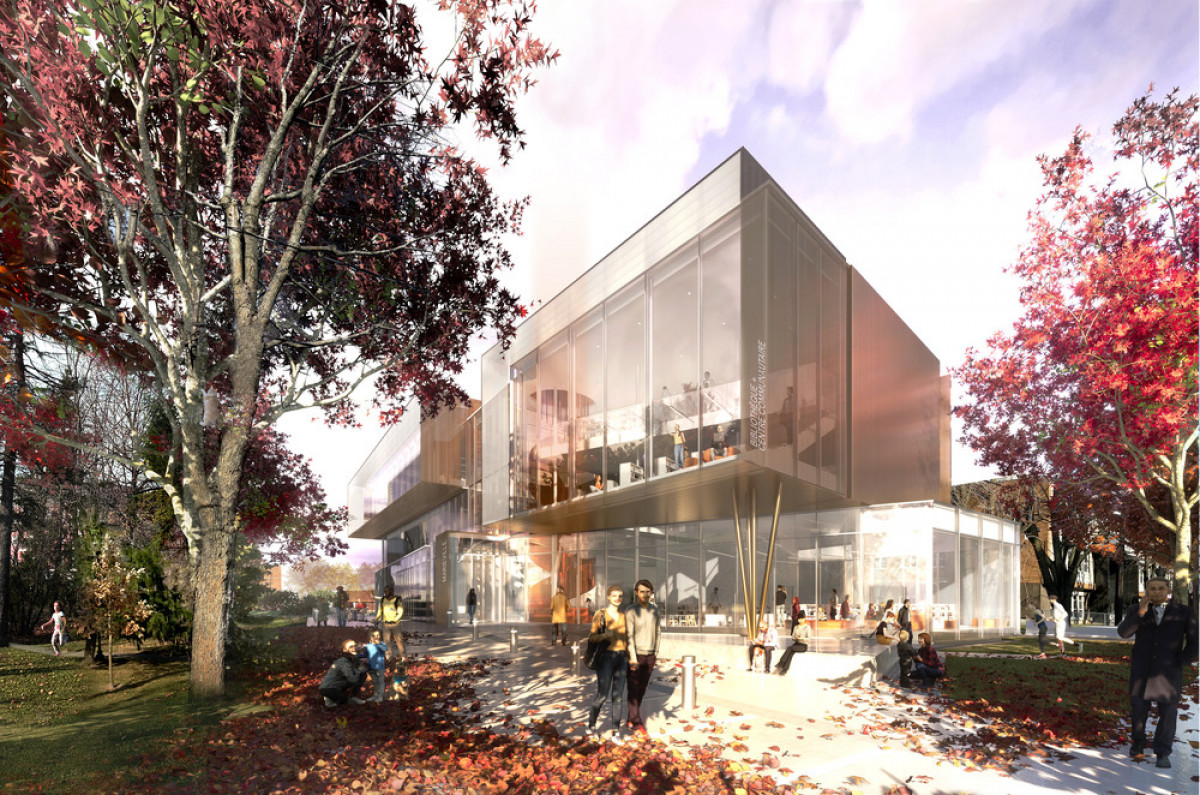 Marieville Celebrates Its Past While Building for the Future

The reason is simple. The Quebec government, which subsidizes the building of cultural institutions, large or small, requires that architecture competitions be held in order to release funding. The rule applies to communities of all sizes, not just to larger cities.

Thus, even small towns not particularly known for their interest in contemporary architecture end up benefitting from a pool of highly creative architects. Such is the case with Marieville, Quebec (with a population of 10000 inhabitants), a rural community located an hour away from Montreal, which launched a library competition in July 2020.

The winning scheme was designed by Anne Carrier Architecture, a team known for its subtle, light-filled interventions.

Like many small Canadian communities, Marieville has a rich history and several buildings of interest, among them an impressive stone church just south of the site. The future library will face the town’s century-old park featuring beautiful mature trees, a monument, and a kiosk where open air concerts can take place. Remnants of a former church are buried in a carefully preserved archeological zone.

The site borders the town’s main street, which runs parallel to a nearby river and still features historically significant residences. Over the last few years, Marieville has taken several initiatives to gradually transform this central area into a civic pole where the library and its community-oriented services will play a major role. As they searched for a solution, the architects paid a lot of attention to the history of the site and its new context.

The project was slated to be built exactly where once stood Marieville’s former library, which had to be demolished in 2012. The future building’s elongated volume was determined by the narrowness of the site, and the presence of a protected archeological area. Nearby features, such as the park, several heritage buildings dotting the main street, a nearby spring, and the church’s parvis were all taken into account as the concept evolved.

A diagonal line was introduced on the ground floor of the library, as a reminder of the main street’s path. This break in the volume not only facilitates visual connections between the library and the site’s notable features but allows for a small triangular plaza, located off the library entrance.

For book lovers and students coming from a nearby school, the church will act as a visual reference guiding their steps towards the main door. Inside, a sculptural staircase will adorn the three-level high lobby, as a reminder of the grain silos still predominant in this rural region.

In their competition entry, the architects opted for transparency and openness, particularly on the west façade facing the park. Services will be kept along the building’s east façade so that all common spaces will enjoy a direct connection with the park lush environment.

The proposed library consists of two three-level volumes linked by an elevator, a sculptural staircase, and two upper walkways. From the central lobby, open to all three floors, one will be able to visualize the entire building and fully grasp the presence of the church, the park, and the town’s main street, running parallel to the river.

As they come in, users will be directed left, towards the multipurpose room and the dance studio on the ground floor, or right to the library’s reception desk and children’s corner. Up one floor, citizens will have access to a community kitchen, workshop, and classroom on the north side, and to a periodicals area and a small café, part of the library. The building’s entire top floor will be dedicated to library functions, adult and teen sections, reading areas, media lab, and administration.

For over ten years now, regulars have been confined to a dark church basement. For them, this project means renewing with the pleasure of browsing and reading in bright and airy spaces. As the project was made public, Marieville’s Mayor Caroline Gagnon declared: “Of course we want this to be a library and a cultural facility. But above all, we hope it will be a place conducive to learning and discovery. We were totally seduced by the brightness of the project and by the perspectives submitted by the architects. We were also pleased with the way the building fits within Parc Crevier’s natural environment."