A Brooklyn-Based Design Studio is Selected as a Winner of Architizer's A+Firm Awards for their Work which Explores the Idea of a “Playable City” as an Ecosystem of Playable Opportunities Intertwined within the Existing Urban Infrastructure that Doesn’t just Disrupt our Daily Lives but Adds to it. 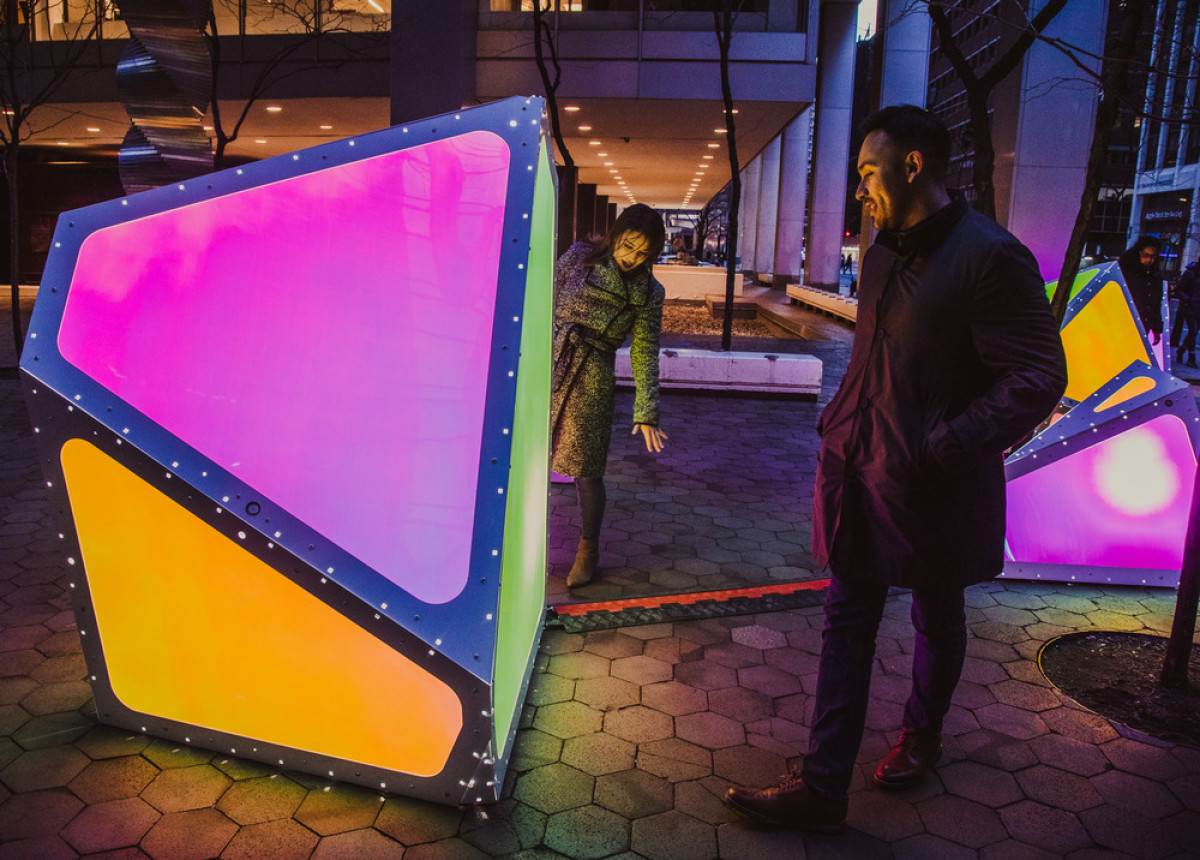 The impact of play is often disregarded and undervalued in the discussions around architecture, urban development, and city change. The Urban Conga’s work is highlighting the impact play can have on the health, identity, social, and economic values within the future development of our cities and communities. Play is universal and should be utilized as a vital part of the movement forward in reactivating our communal public spaces to become more inclusive, safe, and healthier places.

The Urban Conga's work showcases a variety of ways this can start to be explored within our urban development. The studio was recently selected as the winner of the 2021 Architizer A+ Firm of the Year Award for Small Projects as well as the 2020 ArchDaily Best Young Practice. Through receiving these accolades, their work promotes an acceleration in the appreciation and understanding of the value of implementing more play within our changing cities and communities moving forward.

This work is paving the way for city stakeholders, urban designers, architects, and more to start exploring the idea of becoming a “Playable City,” an ecosystem of playable opportunities intertwined within the existing urban infrastructure that doesn’t just disrupt our daily lives but adds to it. Looking at opportunities that explore how play can start to exist in everyday spaces, and begin to encourage people to think about these spaces that could become PLAYcs: like a crosswalk, laundromat, public park bench, street light, or just the everyday spaces in-between.

Investigating how these once often boring or underutilized situations can turn into inclusive, stimulating, creative outlets bringing people together within the built environment.

Project 01: Oscillation
Oscillation is an interactive installation that focuses on using sight, sound, and movement to spark spontaneous social interaction and conversation within a once underutilized space. The piece consists of five parts that are deconstructed from a solid cube using a Voronoi algorithm. Each of these units acts somewhat like a giant Theremin, a musical instrument that you can play without touching. 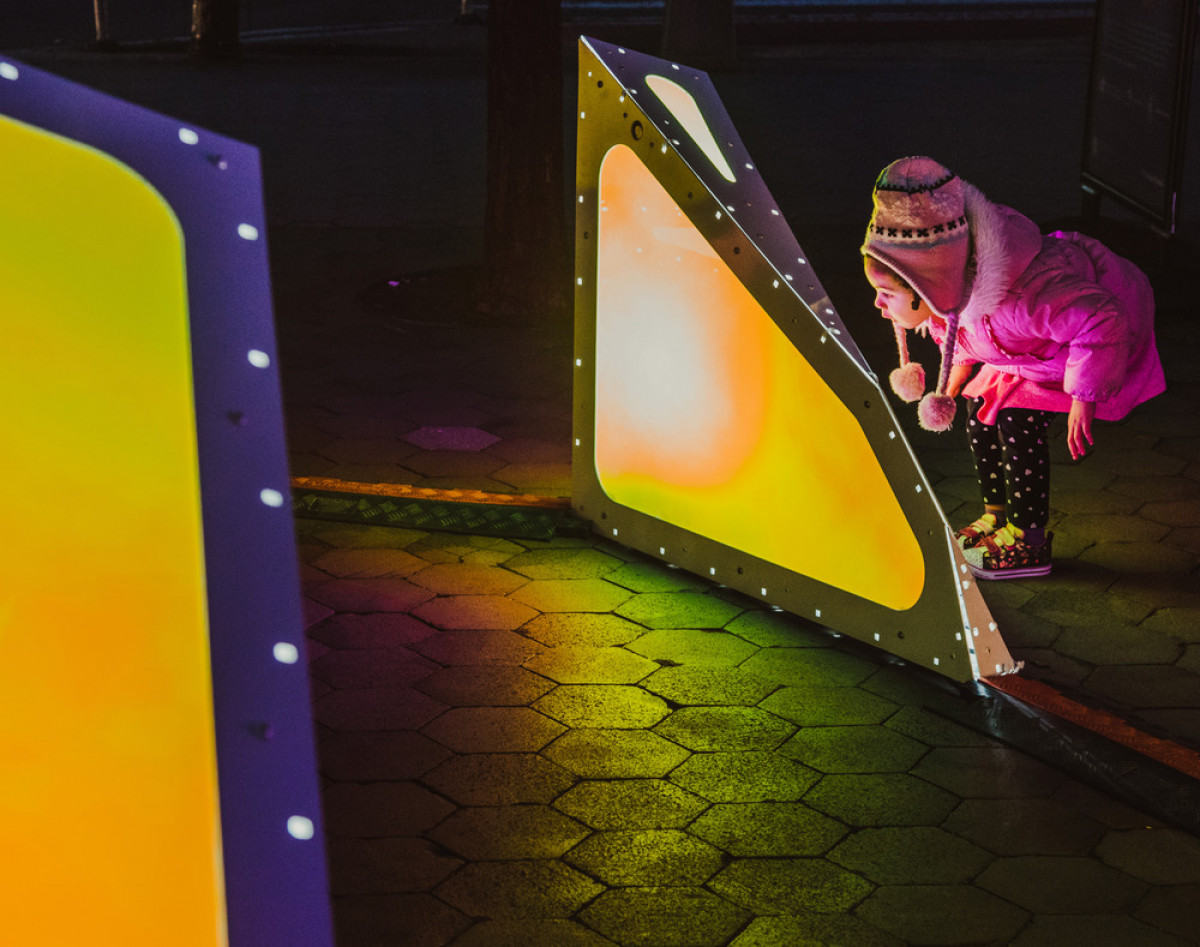 The piece creates a moment of wonder for all ages within the urban environment. Photo credit: Savannah Lauren 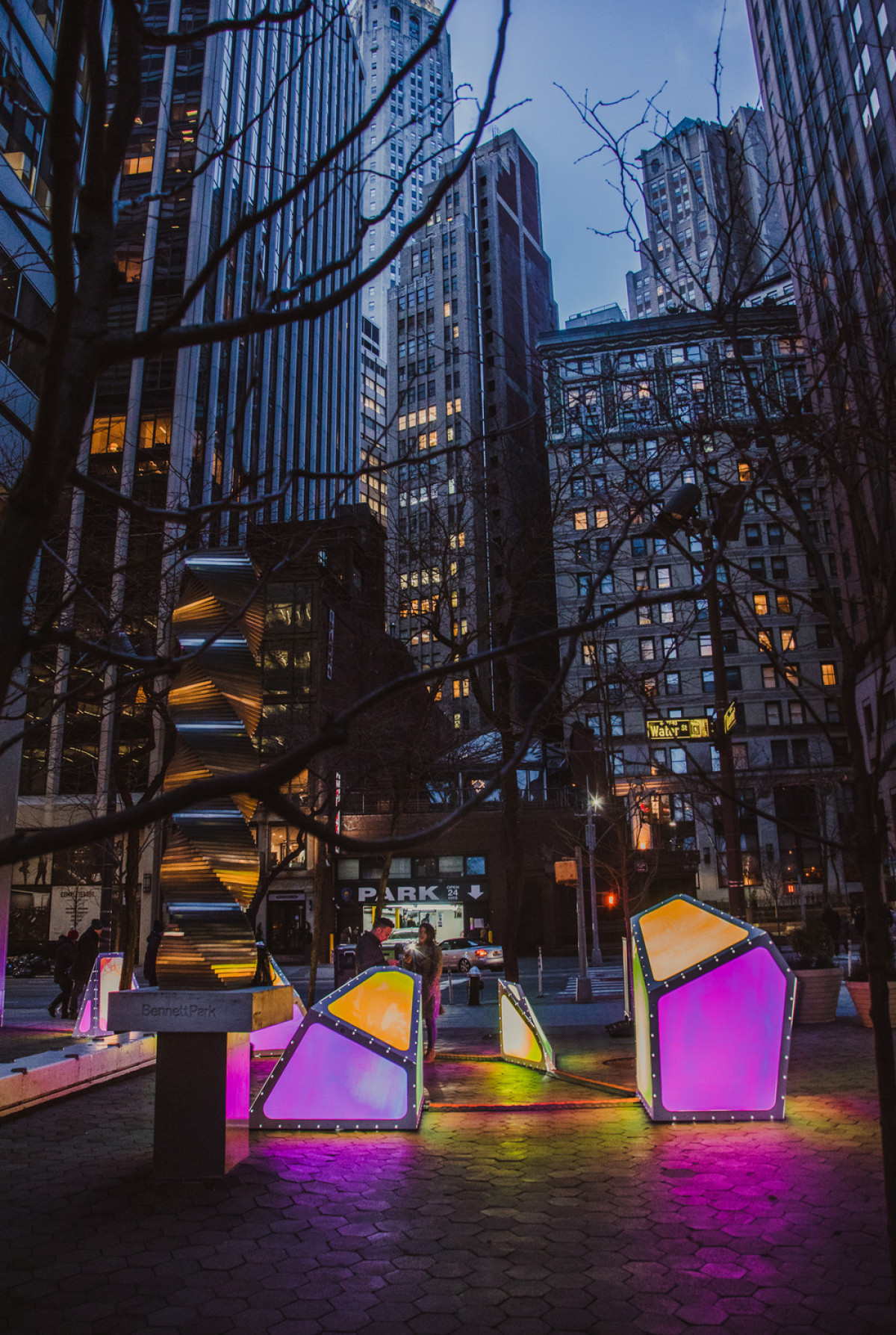 As you walk toward the piece, it plays different sounds and pitches depending on your distance to it. As you move and dance around the piece, colors reflect and refract light differently based on your angle and position to the work. The work becomes an open-ended invitation for people to play, dance, jam out, and come together as a community in public space. The piece was designed as modular pieces so the work can travel and activate new and unique underutilized spaces around the world.

Project 02: The Hangout
The Hangout uses sight, sound, and touch to transform a once underutilized lot into an inclusive, safe, and inspiring space for the community. The project is located in the Lower Ninth Ward in New Orleans, LA; a community still struggling to get back on its feet since hurricane Katrina hit in 2005.

They worked with the community to develop a space that would provide an inspiring creative space for them to simply hang out and enjoy their neighbors' company. The space consists of a series of clusters of cylinders that offer seating and a space to gather. The design utilizes touch sensor technology that transforms each cylinder into a playable, musical instrument.

When the user touches the tops of the cylinders, a sound is made. At night, each of the units illuminates and changes colors as well when touched. These components allow the community to manipulate and utilize the space as they want. A space that they could call their own and feel is a positive representation of their neighborhood.

Project 03: Entangled
Entangled is a platform for residents and visitors to learn, share, and explore the history, stories, and music of Haitian culture outside the Little Haiti Cultural Complex's doors. To create this project, The Urban Conga worked closely with the Little Haiti community and cultural complex in Miami, FL through a series of participatory design workshops. 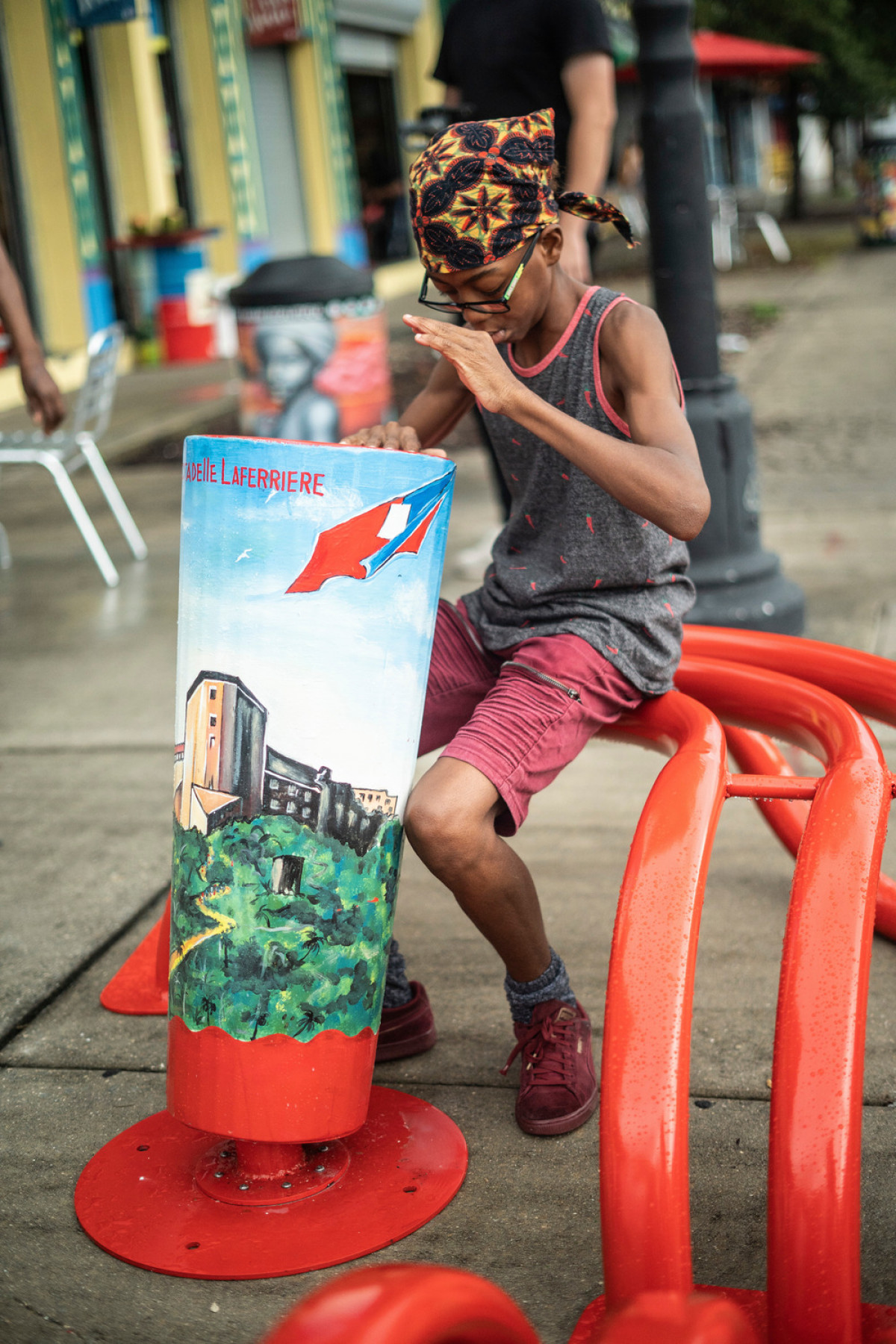 The intervention is made up of three aluminum drums formed from the traditional Rada Battery Haitian drums. They were hand-painted with traditional images of Haiti by local Haitian artist Serge Toussaint. Photo credit: Christopher Brickman 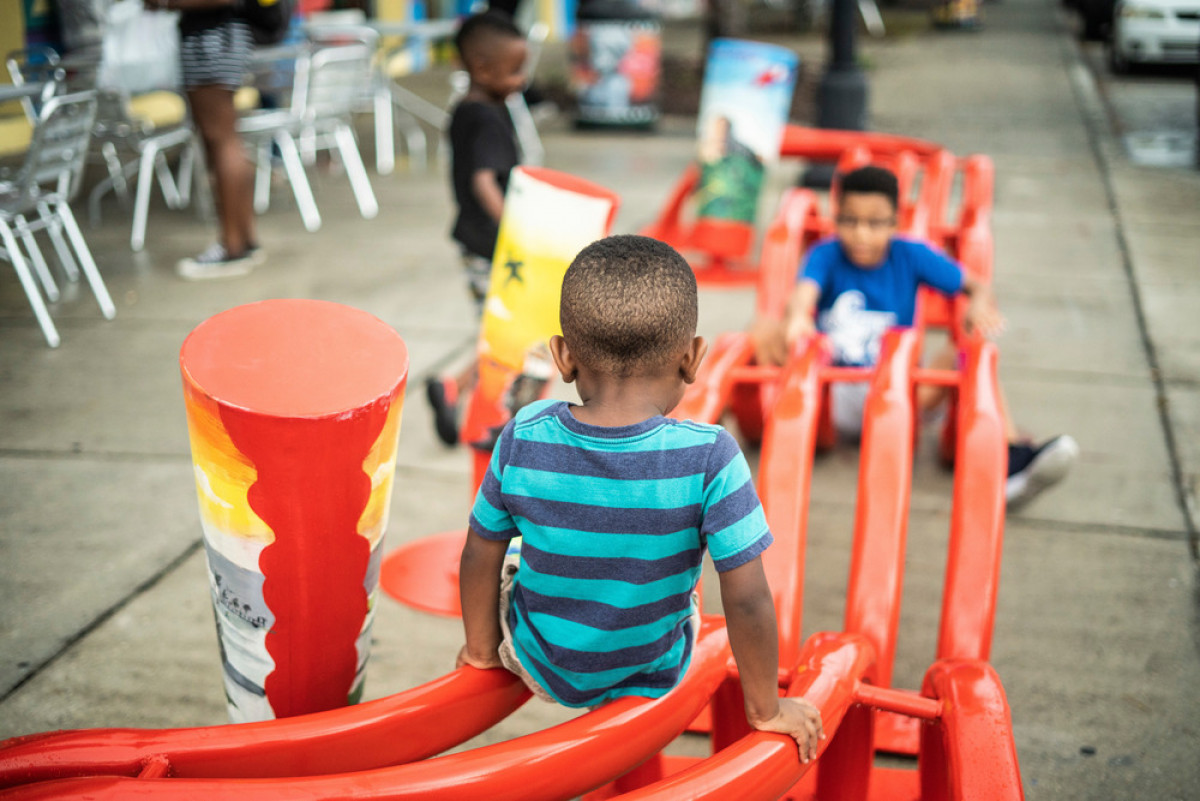 Entangled is made up of three drums connected by an undulating bench system that allows for a multitude of social seating possibilities. Photo credit: Christopher Brickman 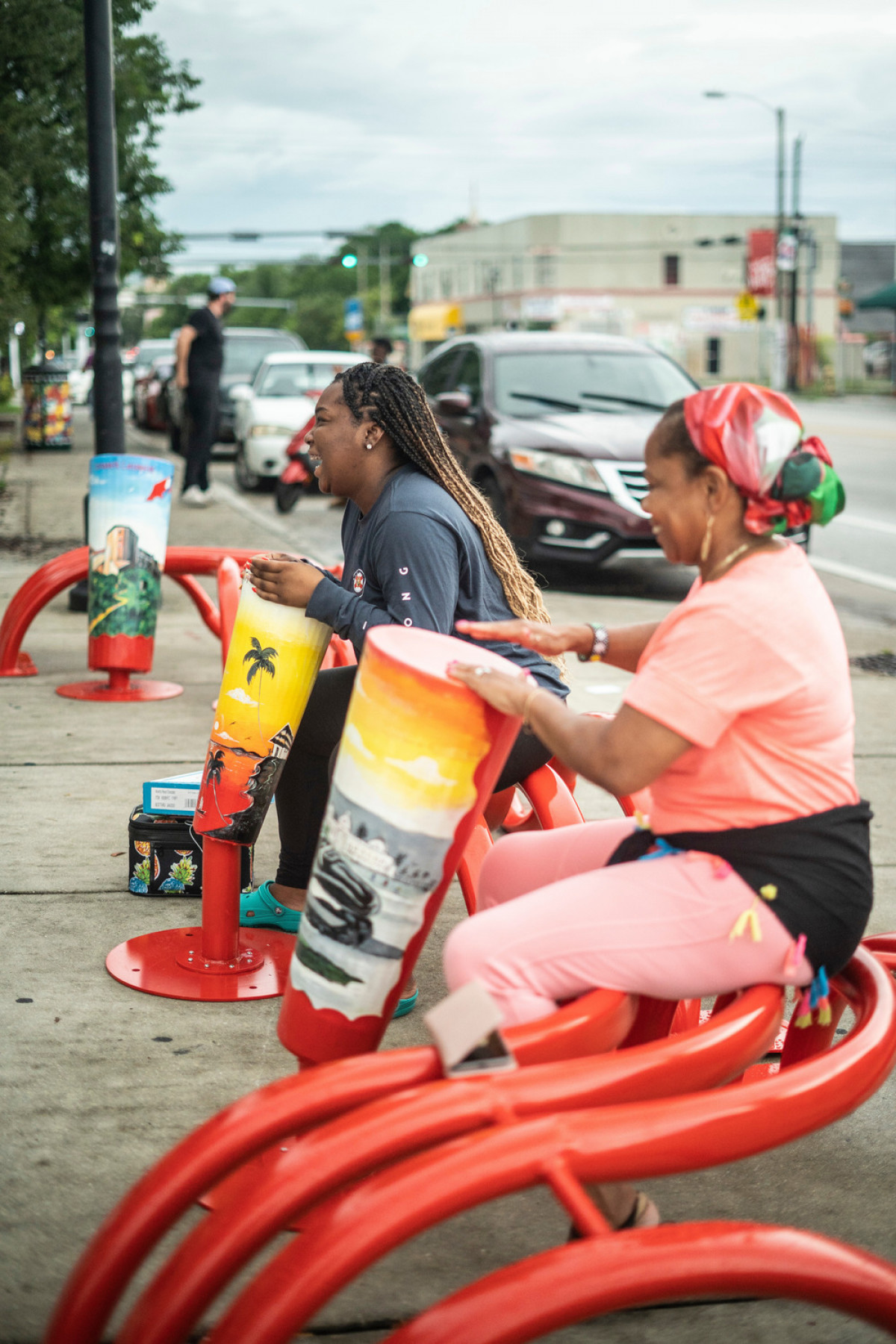 Entangled was designed through a series of participatory design workshops with the Little Haiti community in Miami, FL. Photo credit: Christopher Brickman

The social bench system provides a place for people to sit, listen, and converse on the neighborhood's past, present, and future and its Haitian influence. This is a neighborhood that is being drastically changed. With this project, they wanted to create an opportunity to showcase and celebrate the culture that exists within the neighborhood and is being pushed out. The intervention is made up of three aluminum drums formed from the traditional Rada Battery Haitian drums. The drums are connected by an undulating bench system that allows a multitude of social seating possibilities.

Project 04: Shifting Totems
Shifting totems was designed with the Glenville Community in Cleveland, OH, through a series of participatory design workshops to become a connector between two neighborhoods. The community wanted a piece that would spark a moment of pride, empowerment, and inspiration for their residents as they passed through the new park being developed.

The work was created as a platform for sparking a conversation between the residents and visitors about the adversity the community has gone through and continues to go through today. It was designed to evoke a moment that would empower and inspire the neighborhood’s youth through a playful conversation. The piece is made up of three aluminum totems that resemble tree trunks emerging from the ground.

Each totem has a series of units that can be rotated to spell out different words like strong, knowledge, go vote, pride, and many more. At the base of each totem is a larger section for people to sit and converse about the neighborhood’s past, present, and future. The piece was designed not to be a static piece that one just walks by but a catalyst for a larger conversation about the area’s misrepresentation.

Project 05: Why sit when you can play?
“Why sit when you can play?” is a musical public park bench system designed to begin to bring the everyday park bench back to life by providing an open-ended playable platform within the built environment. The benches’ unique forms are custom created based on the specific space in which they reside. The flowing organic form is designed to encourage different levels of seating interactions, from a romantic couple to a large jam session. The benches’ musical sections each contain two octaves of musical notes. The notes are made from solid aluminum bars that are cut individually to resonate a specific note. The musical notes can either be played with attached mallets.

About The Urban Conga

The Urban Conga is an international multidisciplinary design studio based in Brooklyn, NY. Their work is focused on sparking community activity and social interaction through open-ended play. They achieve this by working with communities through participatory design methodologies to create inclusive, engaging, and site-specific work that sparks creativity, exploration, and free-choice learning within the built environment.

As Plato once said, “You can discover more about a person in an hour of play than a year of conversation,” and those are the exact sort of moments their design studio strives to create for all demographics. They are creating opportunities that bridge divides and begin to break inequities within the public and private realm. Sparking ever-changing moments that keep inviting people back to engage with the work, the surrounding environment, and each other in new and different ways.

Their work becomes multifunctional platforms for people to share, listen, and learn about their neighborhood and neighbors.