Floating and flying in style in the Sky Box

Updated On : 27 Jan 2022
The Sky box is designed in such a way that it creates an illusion of a floating mass in the air
Share

The Sky Box house, constructed in a small rectangular 240 sq. metres lot of land, located in the Himalayan foothills in Panchkula, Haryana facing towards the north direction, is an architectural outcome guided by three main design aspects – light, simplicity and proportions. The client for the project was a nuclear family with each of the three members involved in different professions, thus, possessing distinctive tastes and preferences. 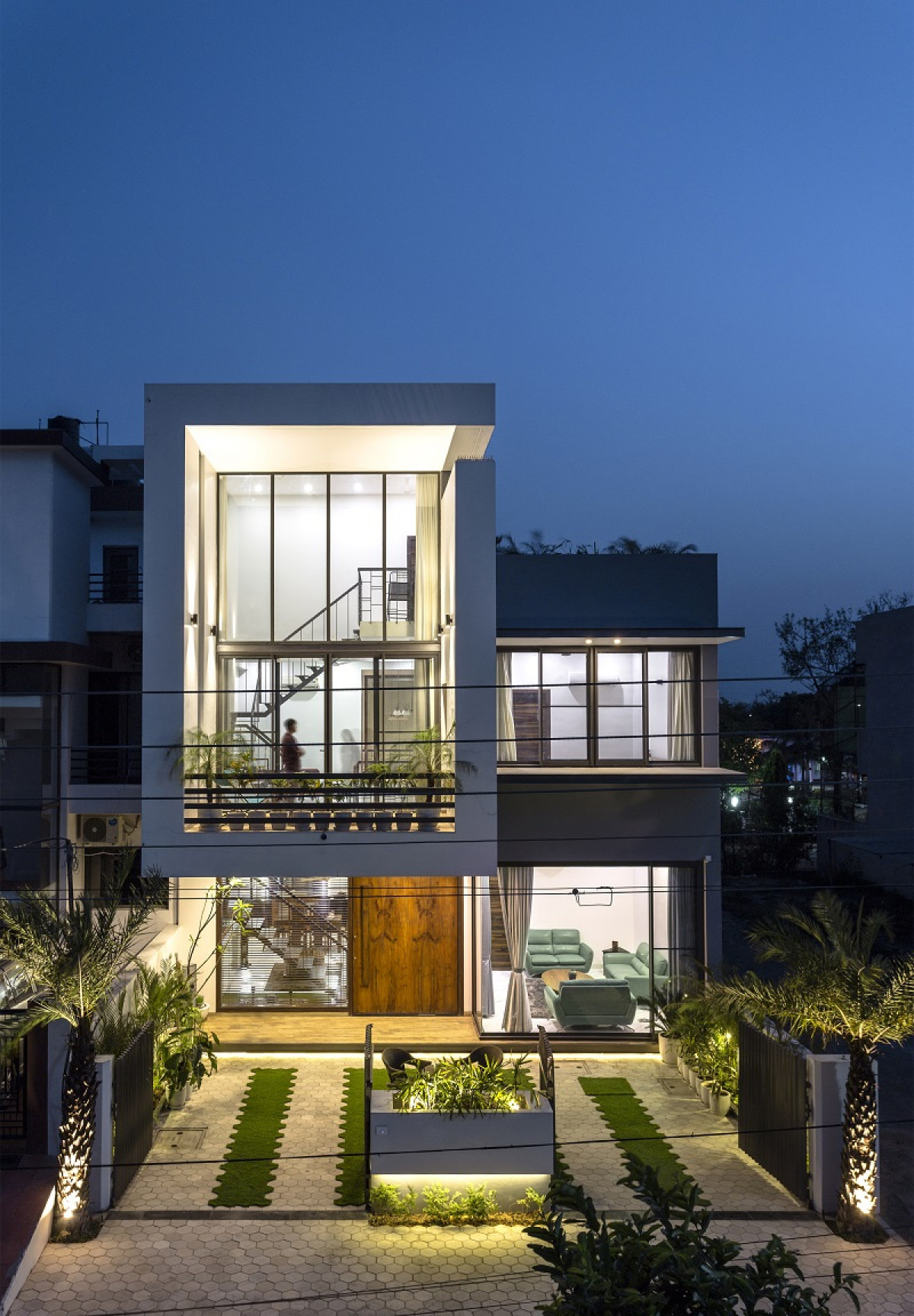 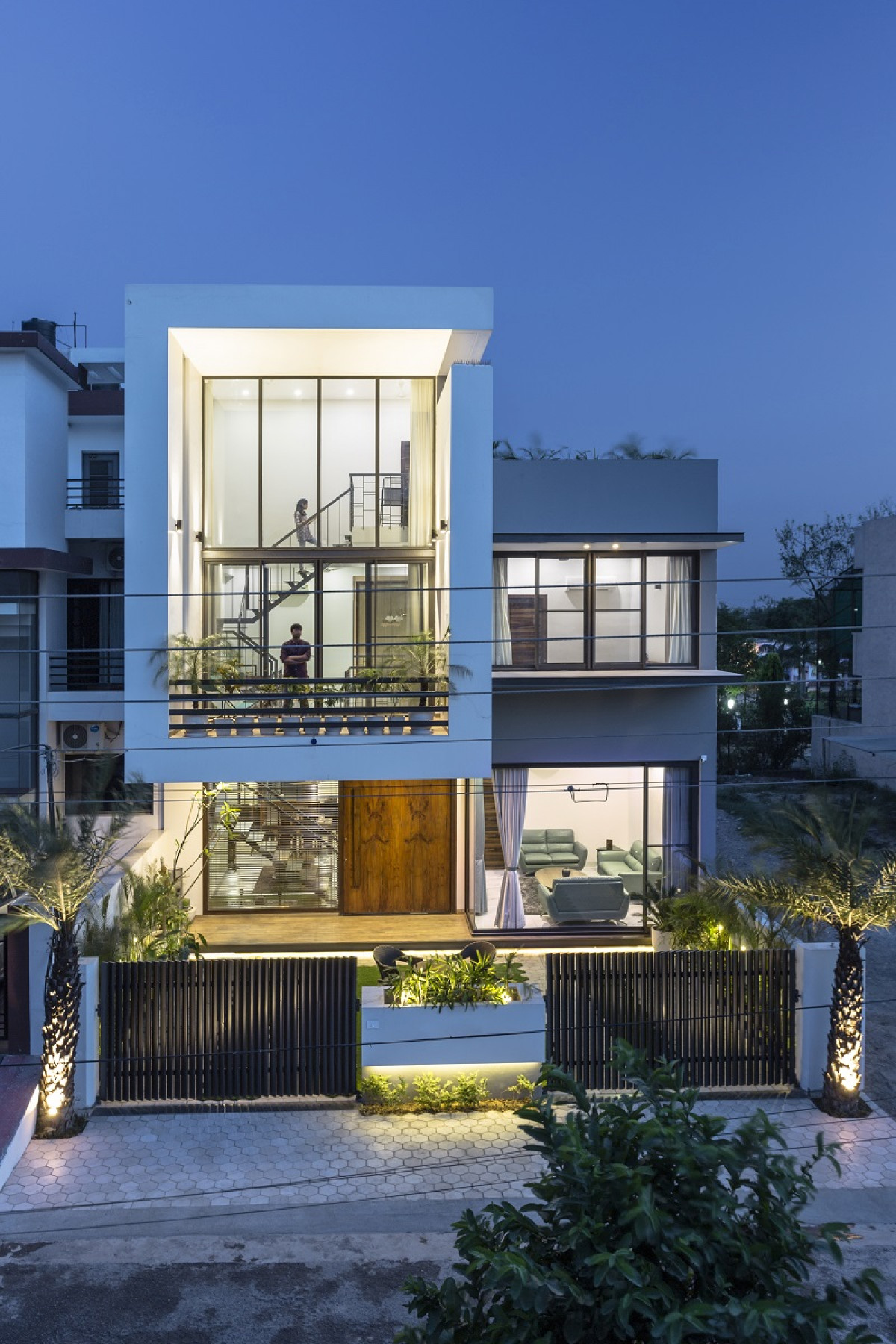 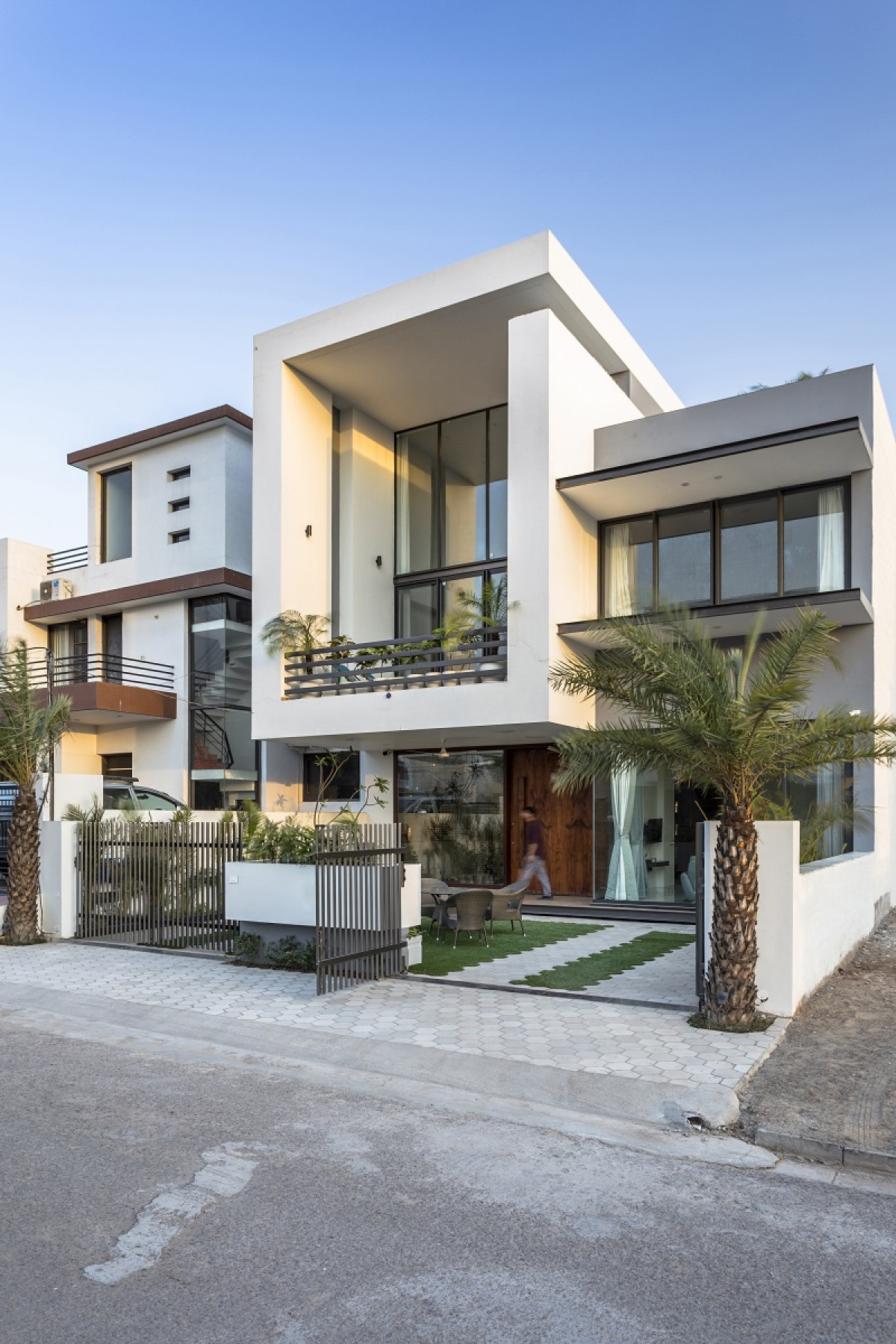 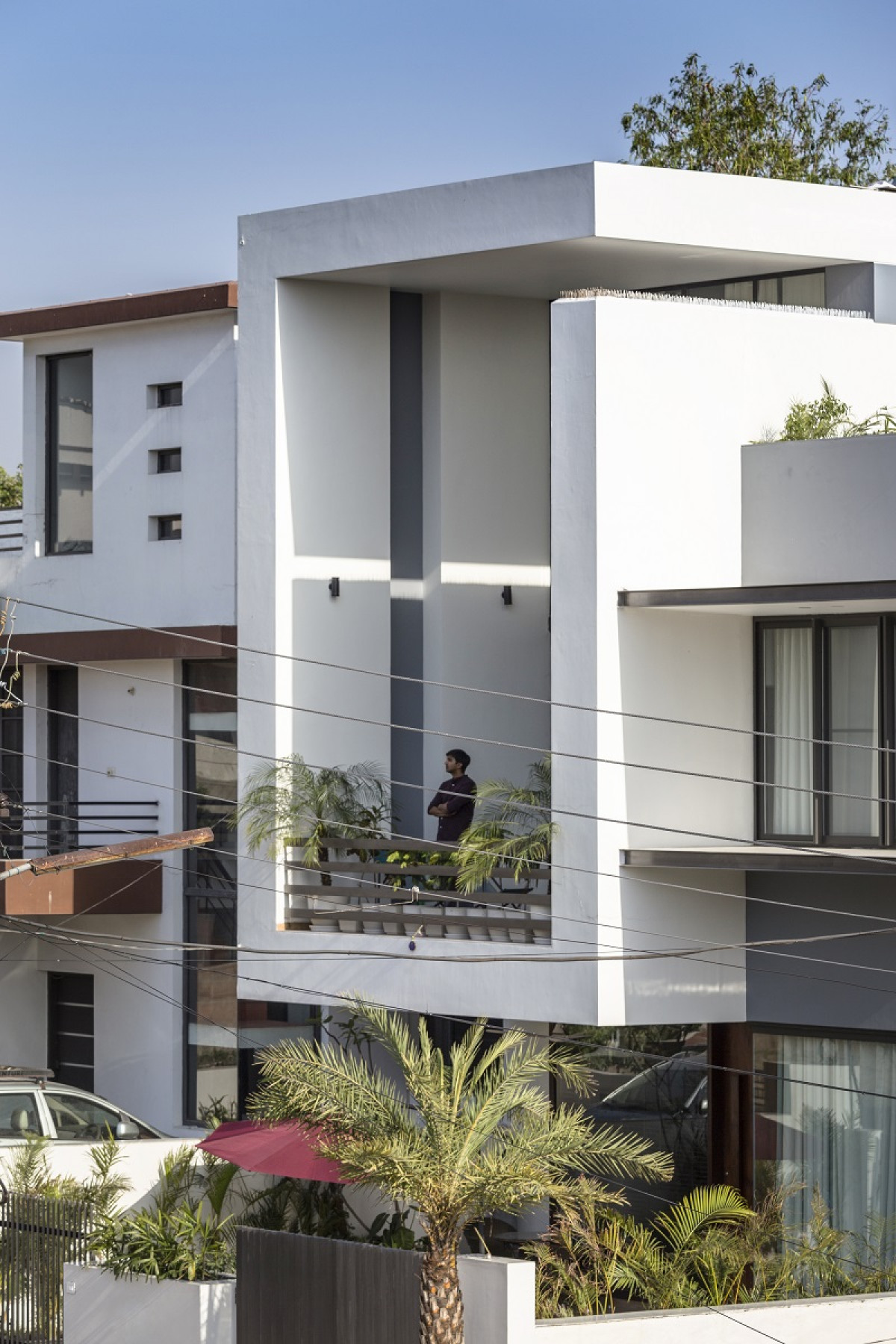 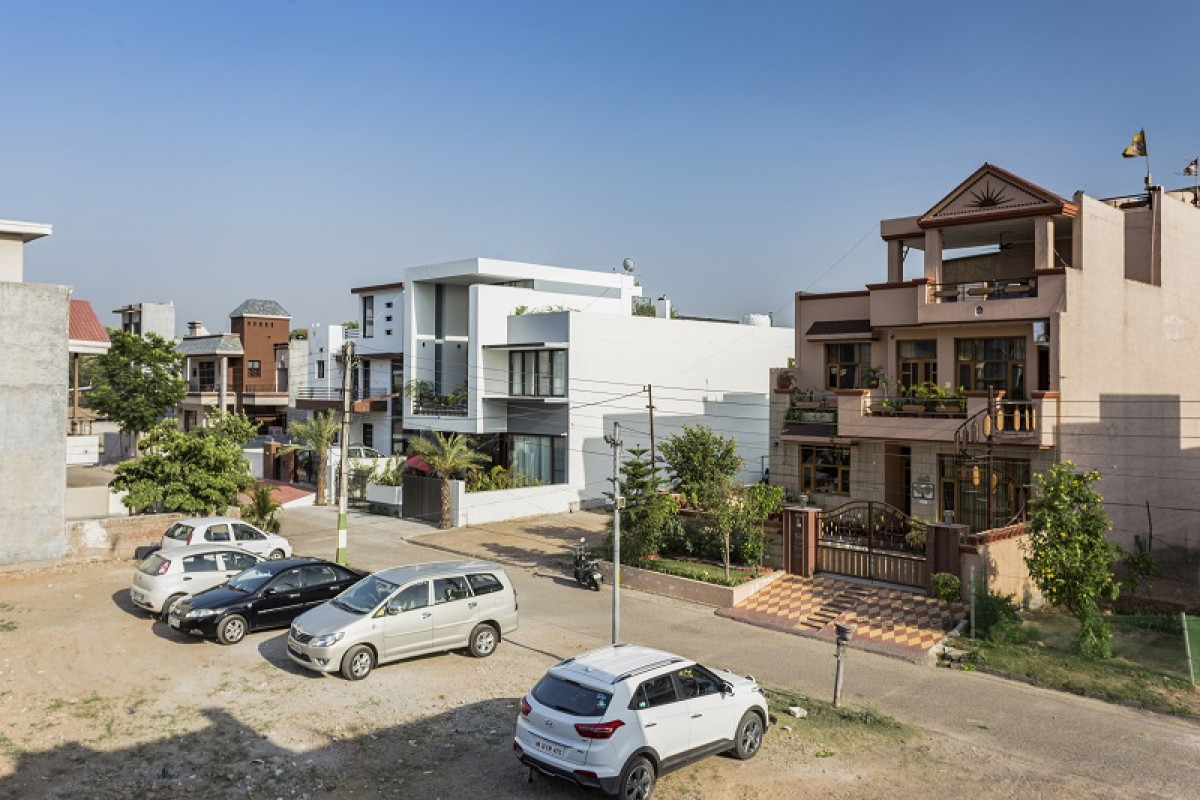 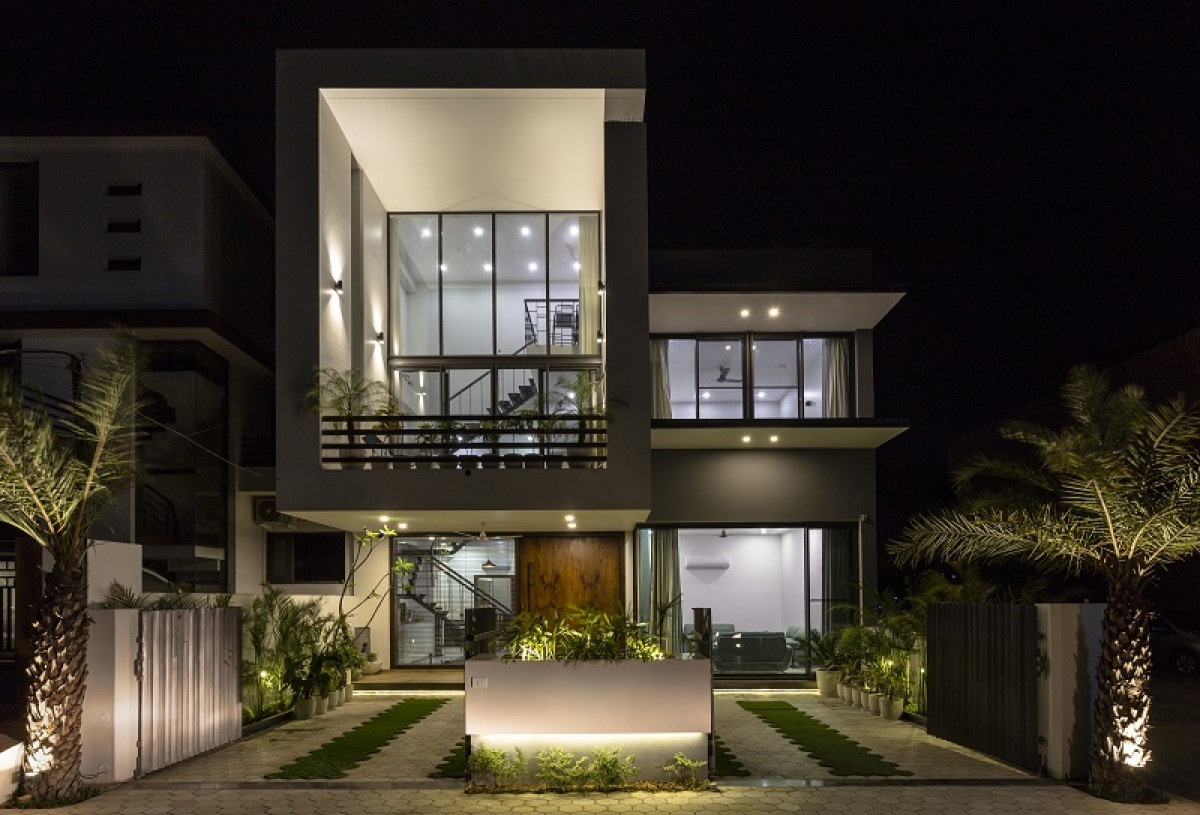 The architect proposed a design solution which not only complied with the individual requirements of the family, but also stood up defying time and budget constraints. The house has been designed in consideration with the ‘Flow of Energy’ concept of Vastu. Another inspiration came from a conception of the Architect F.L. Wright: ‘A building should convey a sense of shelter, refuge, or protection against the elements.

Its inhabitants should never lack privacy or feel exposed and unprotected.’

One of the prime concerns of the inhabitants – Privacy, was well taken care of by spatially segregating the private and common spaces of the house, and placing them in the best suited locations governed by factors such as light and air movement. For instance, the floor to ceiling height glass windows facing outside, provided in the first floor bedroom, are horizontally lineated by ledges at sill and lintel to obstruct the direct visibility into the interiors. On the inside, it offers a view of the entranceway and facilitates a plentiful north light entering the room. 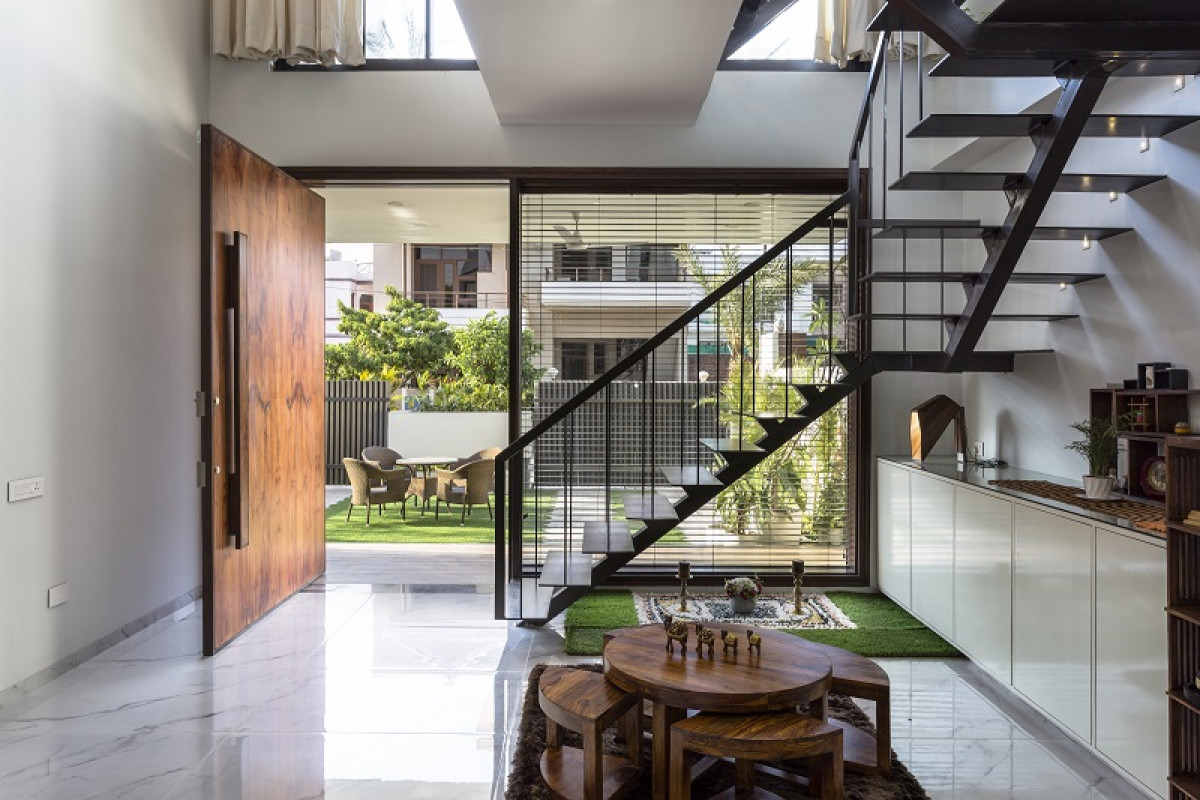 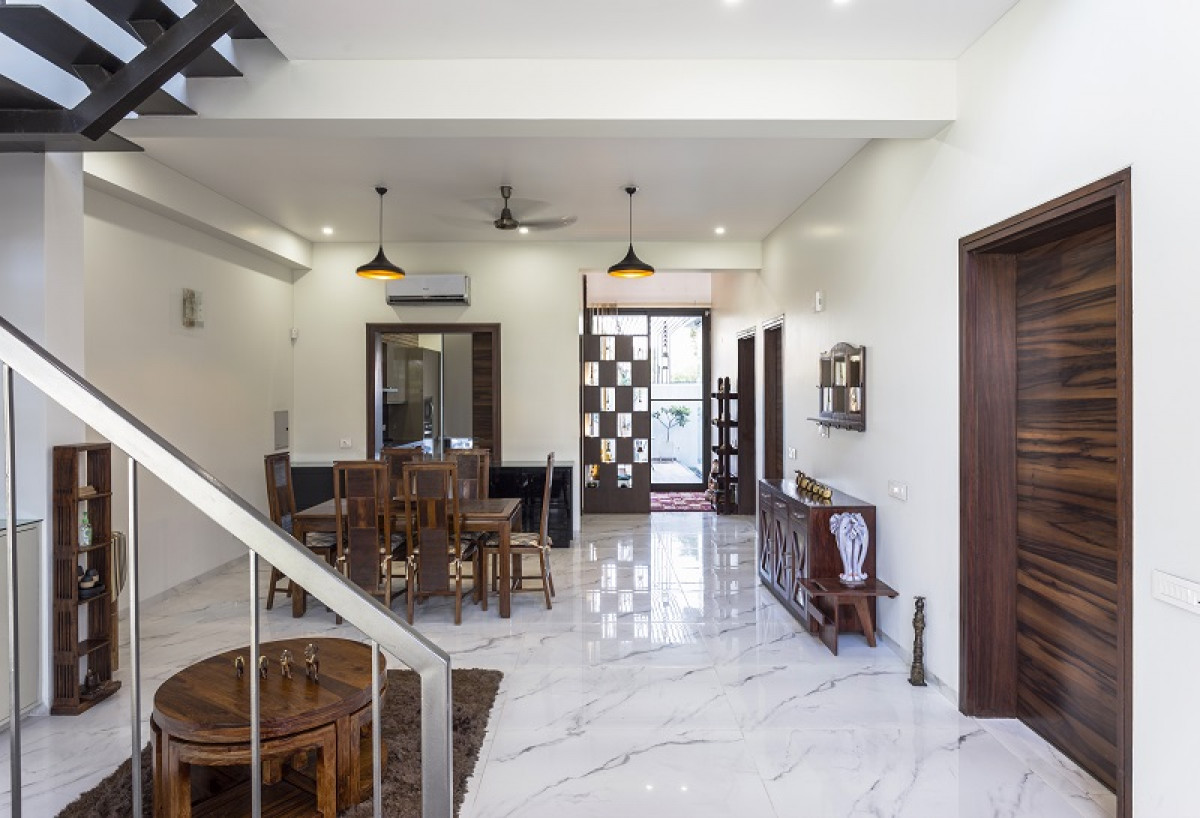 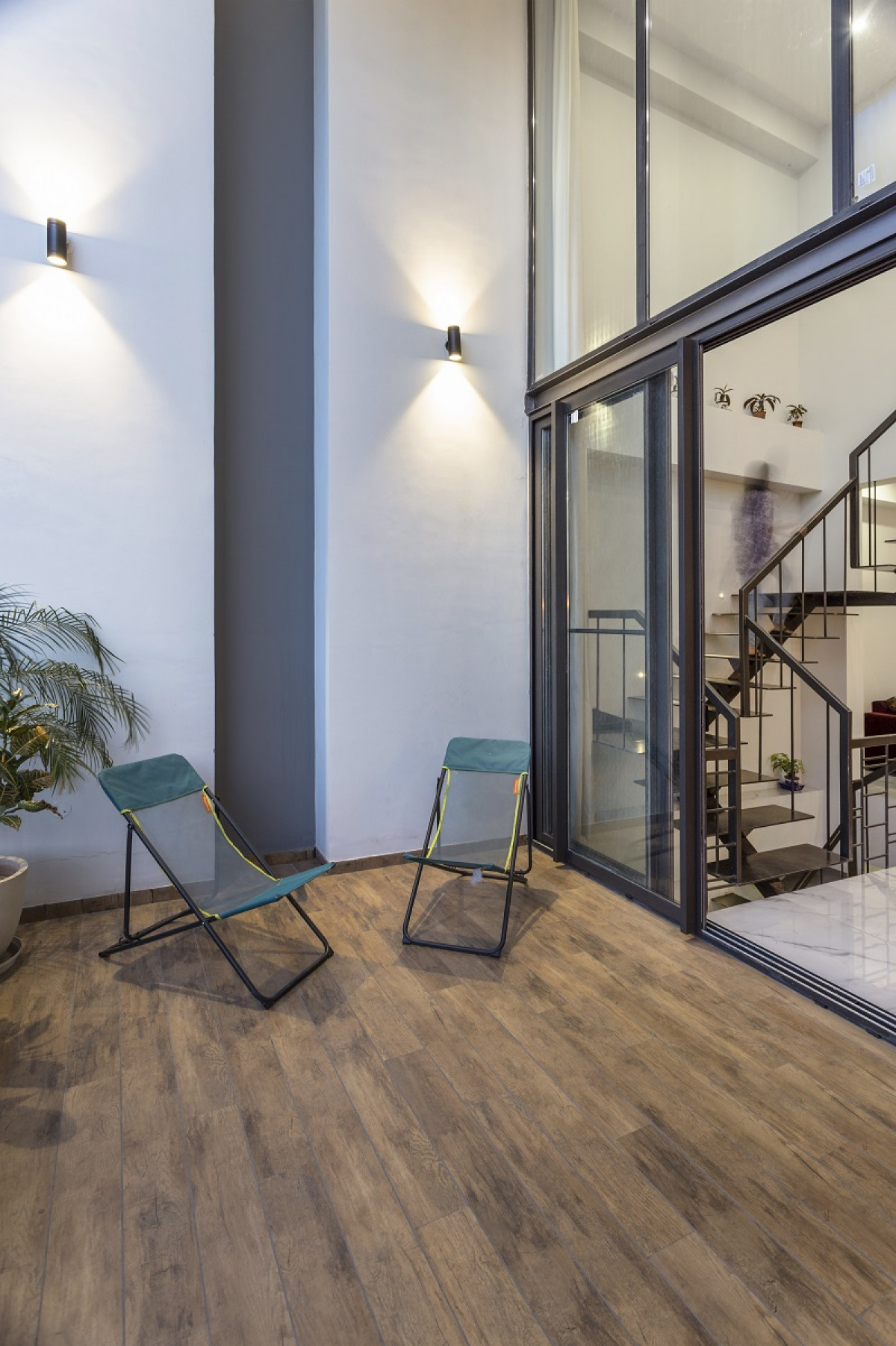 Being a pilot by profession, inclination towards aerial entities came instinctively to the youngest member of the family, which came up as an epiphany for the creation of ‘Sky Box’ – illusive of a floating mass in the air.

The 11 feet cantilevered block, emphasising its prominence in the front facade, serves for a double-height semi-open space. The largesse of this space has been further realised with a play of proportions, by providing a full height glass screen which showcases the sculptural sparkling grey metal staircase; gracing the double height volume. The glass screen allows the stairwell to engulf bundles of natural light, which then bathe the interior spaces, such as the main living area, in a balanced light through the cut-outs.

Shifting of mass in the box allowed for a beautiful effect produced on the left side wall by the light entering through the horizontal slit, which was collated by a vertical grey band in the middle of the wall.

‘Driveway embedded in the garden’ was a novel design approach formulated in the front lawn area of the plot, where the paved portion emerged out of the green lawn, which fulfilled the demand for a lush garden in spite of the constricted space. 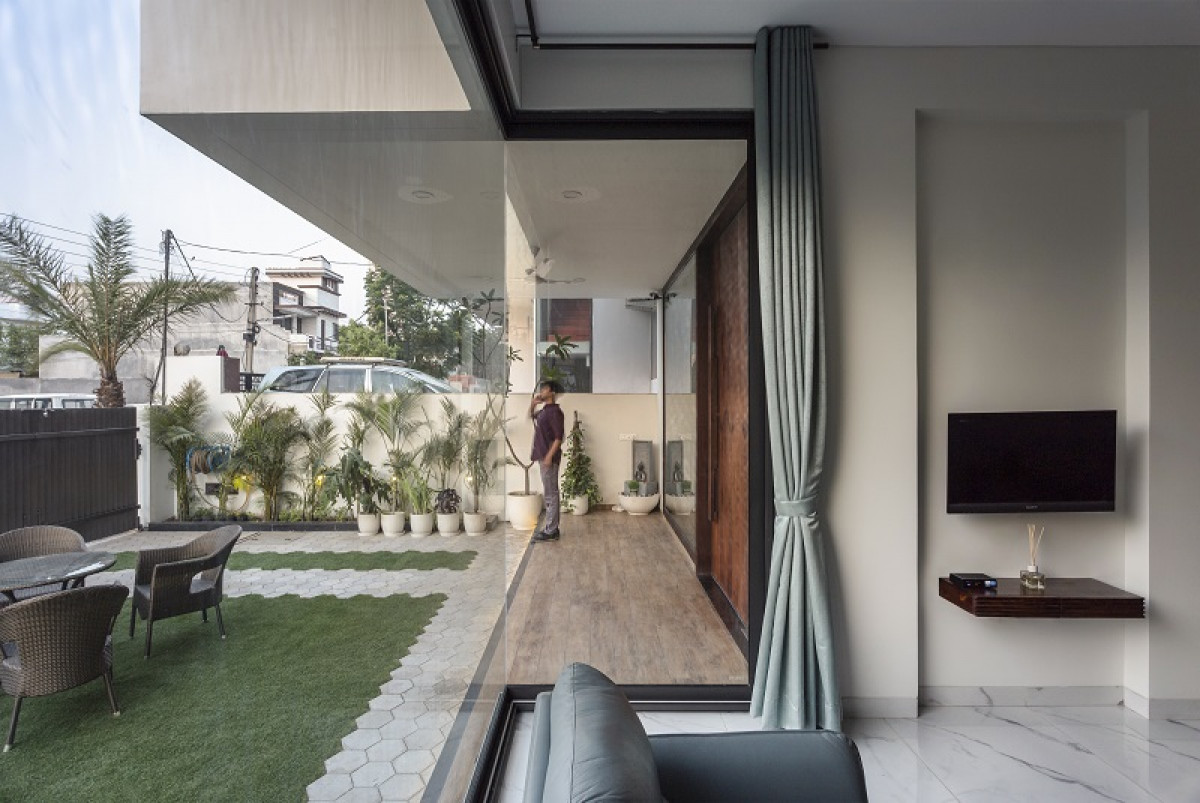 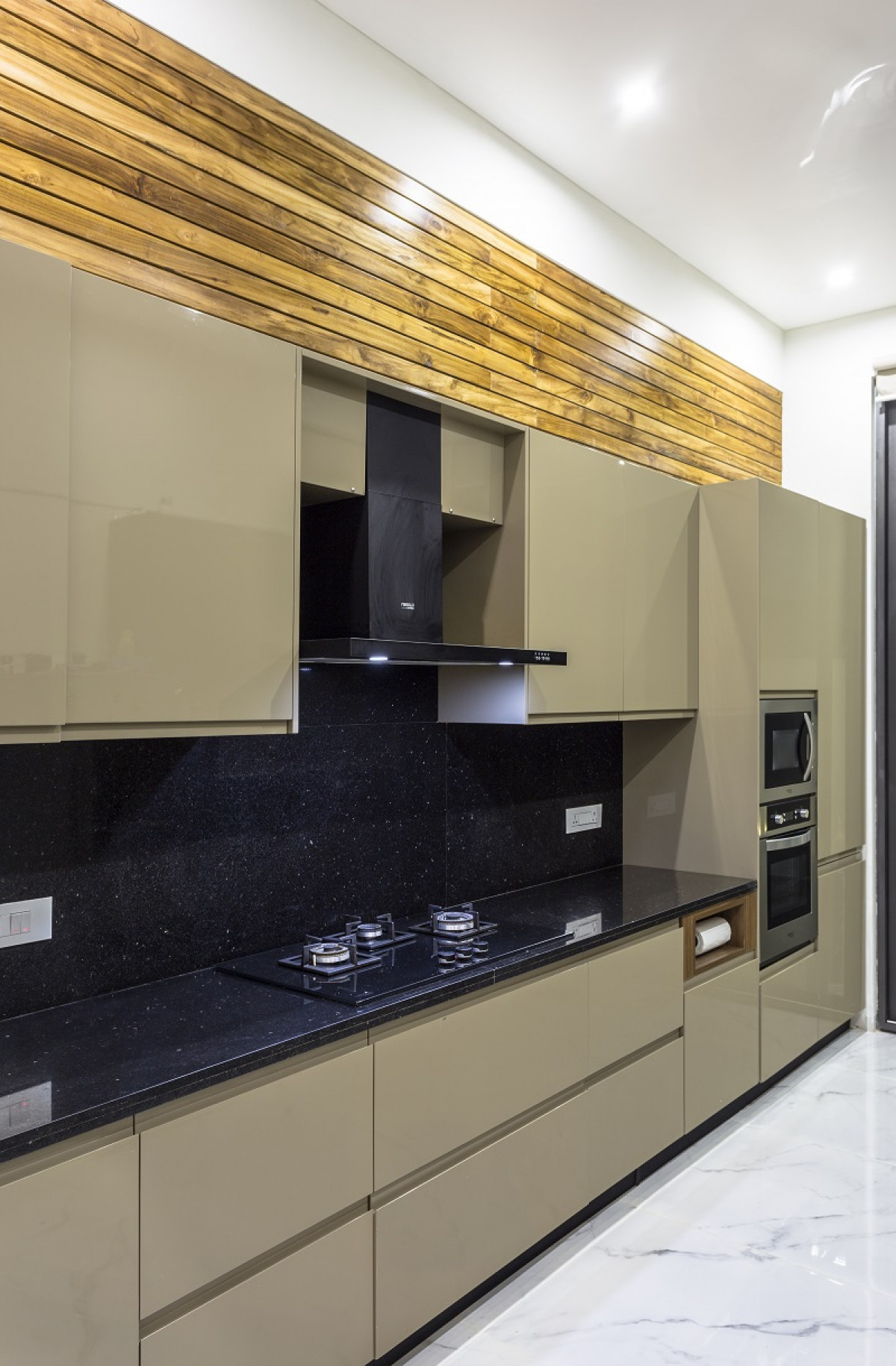 The palm trees embracing both edges of the site at the entrance have been lit up, an inspiration from the glorious palm tree lighting adornments in Dubai.

The main entrance door 7 feet wide and 10 feet high, clad with veneers of vintage teak from Burma, not just appreciates the elegance of the fore frame, but also adheres to the clients’ anthropometric requisites. The exquisite hand-grip was made from scrap wood which camouflages with the door.

A visual continuity of spaces is achieved along the central spine with the rear wall of the house visible from the entrance itself, thus, uniting a sequence of spaces, i.e., the front garden, entrance foyer, hallway, puja room and the rear deck through this visual linkage.

The well-lit entrance foyer with double height space uniformly spreads the daylight in every part, adorning it with a welcoming appeal. Functionally, the Puja space has been given a centric placement, and its double height allows for a continuous cycle of energy flowing throughout the house.

The toilets located in the central portion of the house were provisioned with skylights; a peculiar feature as observed in the surrounding context; for penetration of daylight along with appropriate ventilation, thus, developing a connection with the outdoor environment.

The client had put forward a requirement for a shoe-rack spacious enough for a capacity of 75-100 shoes. The under staircase space on the ground floor was utilised for a 3-feet high console made out of HDF wood with lacquer paint finish, making room for around 80 pairs of shoes.

Ready Mix Concrete (RMC) was used to pace up the construction process for confronting the completion target of 6 months put forward by the client. Another issue of monkeys invading the house had to be dealt with, which was resolved by providing spikes above the compound walls.

Captivation towards the time–honoured design styles, client being a native of Rajasthan, directed the strategy for a subtle but elegant lot of material, colour and texture selection for the interiors. Ochre- toned wood finishes used for the furnishings and coral satin walnut veneer finish (imported from USA) for the doors become the cynosure against the neutral backdrop set by the white walls and the floor. Black galaxy granite used in the kitchen counter and dado area gives the illusion of an infinite surface.

The assorted selection of furnishings applauds the authenticity of the interior spaces and complements the material palette even in the absence of a false ceiling.