Formalising the Informal: Potential of Self-Development of Slum Communities by Rahul Kadri of IMK Architects

What is the future of slums in a post-COVID-19 world? Can we formalise the informal? asks Rahul Kadri of IMK Architects
Share 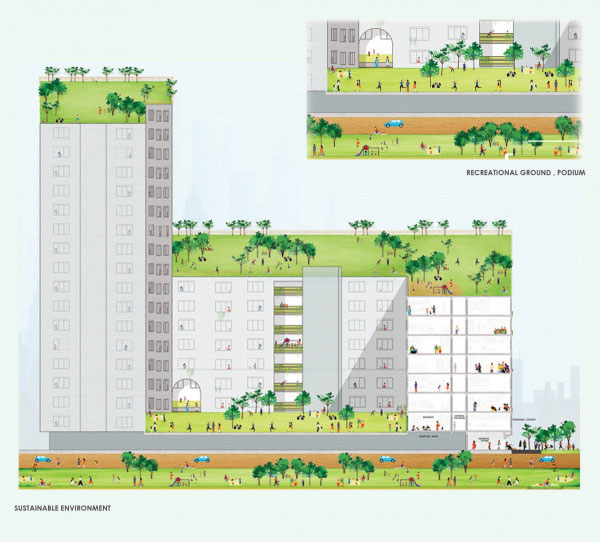 Formalising the Informal: Potential of Self-Development of Slum Communities by Rahul Kadri of IMK Architects

The coronavirus outbreak has shined a spotlight on the often overlooked underbelly of India’s ‘City of Dreams’ –– the slums and other informal settlements where about 49 percent of its population resides. While the number of infections seems to be in control at the moment, the risk of spread continues to remain high within these neighbourhoods where unusually high population densities (up to 350 families per hectare against the city average of 38 as per data from the 2011 Census) and poor, communal drinking water and sanitation facilities mean that social distancing is virtually impossible.

Cities are envisaged as the hub of economic, social, and technological advancements and opportunities, which brings in an incessant flow of migrants to them. This ‘urban pull’ is driven by the perception that the expanse of the material infrastructure of a city narrates the improved quality of social life that one may attain on relocating from smaller towns or rural areas. However, widening gaps between growing city populations and physical and social infrastructure required to accommodate them is leading to a lopsided pattern of urban development accompanied by an increasing number of urban poor.

For instance, while Mumbai grew spectacularly as an urban centre in the years following India’s independence, the geographical constraints of the island city have caused serious problems today. With a premium attached to limited land and space, land and building stock prices have skyrocketed. This pushes incoming migrants, who make up the majority of the city’s population, to seek housing within low-cost, poorly designed shanties and tenements in informal settlements with extremely poor living conditions.

*49.38 percent of Mumbai’s population, accounting to around 4.6 million people, lives in slums that occupy barely 7.5 percent of the city’s area.

If one looks at the chronological framework of government policies implemented to alleviate the plight of people living in slums, a model of clearing the ’encroachments’ and rehousing slum dwellers in subsidized rental housing can be observed. The ‘Subsidized Housing Program’ of 1952 was the first nationwide program that provided subsidies and introduced loan schemes for economically weaker sections of the society to purchase land for construction of houses. The archaic ‘Slum Clearance Scheme’ introduced in 1956 targeted the removal of sprawls and slums to ‘clean’ the city but failed owing to shortage of resources to build and maintain housing stock for the relocated occupants. In 1970, the ‘Housing and Urban Development Corporation’ (HUDCO) was created as the government’s nodal agency for promotion of ‘sustainable habitat development’ by providing home loans to lower income groups (LIG) with longer repayment periods.

With the initiation of more novel programs such as the ‘Bombay Urban Development Program’ (BUDP) of 1984 and the ‘Prime Minister’s Grant Program’ (PMGP) conceived in 1985, there was a shift in the policy paradigm from slum demolition to slum up-gradation. In the 1970s and ‘80s, through various acts and programs and with aid from The World Bank, the government assured provision of basic services such as water, public toilets, electricity, pathways, street furniture, conservancy, primary healthcare and educational facilities. During this time, the leasehold tenure of land was also transferred to the cooperative housing societies of slum dwellers.

The Birth of Vertical Slums

With the admission of private sector players, however, lured by the assurance of FSI (Floor Space Index) and TDR (Transferable Development Rights) incentives in 1995’s ‘Slum Rehabilitation Scheme’ (SRS), the needs of slum dwellers were shelved to prioritise profits to builders and developers.

SRS facilitates the redevelopment of slums through the concept of land-sharing where open sale of housing units in the market allows the cross-subsidising of free units for the slum dwellers. However, the full authority and discretion on decisions concerning the quality of construction lies in the hands of private developers, which has turned this scheme into a crooked and ineffective mission. Driven by profit margins, developers use up to 75 percent of the available land to build units that they can sell, while forcing the existing slum dwellers into the remaining 25 percent, transforming horizontal slums to vertical ones in the name of high-rise development.  3.4 lakh families have been rehabilitated already –– registered slum dwellers, sometimes multiple families who lived within single tenements, have been allotted one flat each in newly constructed buildings, which tower to as high as twenty floors. Within these matchboxes in the sky, occupant discomfort and health issues are rife, aggravated by the poor quality of housing units, an abrupt shift to vertical living, cramped living spaces, lack of daylight, thermal discomfort on upper floors, high levels of noise pollution, and inadequate fresh air exchange and ventilation leading to poor indoor air quality. These buildings also neglect how ‘life on the street’ is inherently tied to the socio-economic fabric of informal settlements; the lack of recreational and community spaces restricts occupants from engaging in community or livelihood activities that were an integral part of their life in the slums. Instead, close proximity of adjacent high-rise buildings results in open spaces being treated as garbage dumps, resulting in public health challenges.

Also Read | Osaka, Japan : Celebrating the true spirit of the city! Find out how.

This incompatibility between low income and the high cost of living in the city, as well as the dissatisfaction with the new rehabilitation buildings, forces distressed residents to move back to slums or to look for new squatter settlements, ultimately failing to solve the humanitarian crisis of informality and merely accomplishing the capitalist objective of increasing density and optimising land resources.

Power to the People

So are there better alternatives? How can slums be redeveloped in a manner that ensures affordability, inclusivity in decision making, improved quality of life and socio-economic wellbeing of the community?

Self-Development of Slum Communities (SDSC), a process where slum occupants take on the mantle of redevelopment themselves supported by the expertise of appropriate professionals, might provide the solution. SDSC is aimed at accelerating the entire process of redevelopment with the self-intent of the community. With the association of residents as stakeholders in the process, a transparent and inclusive design process could be enabled that directly and efficiently addresses the needs and concerns of the residents, fulfilling their expectations of better living conditions. Such a proposal could be easily incorporated within city development plans by transferring the development rights of land parcels marked as slums to the association of the current inhabitants of that neighbourhood.

Also Read | Will A Wood Kitchen Work In Your Home ?

Permissible FSI will need to be reduced to ensure that ‘vertical slums’ do not take form again. Instead, the government could discontinue levying the charges that it does to reduce project costs significantly. This would allow residents to fund the construction through personal loans along with liquid capital raised by the sale of new units from the development. The loans could be repaid with monthly EMI instalments with appropriate subsidies, which would be far lower than the unusually high rents that occupants pay for remarkably low square footage. 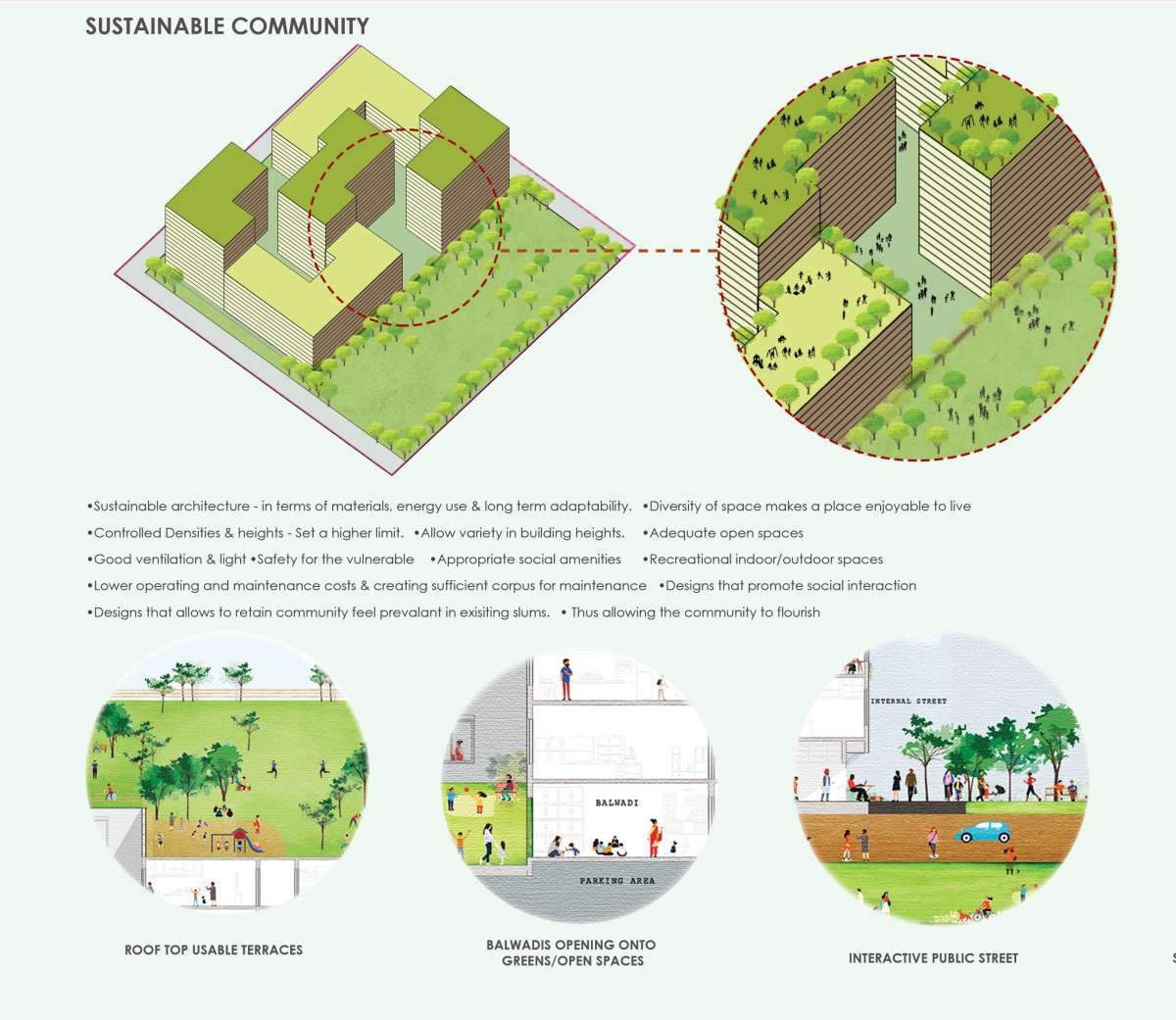 It’s important to understand that the vision of a slum-free city needs to be viewed through the lens of inclusive development. Elimination and clearance of slums has to be substituted for up-gradation of living conditions, provision of access to basic services, and participation of the current slum dwellers in policy conception. Only with a multi-faceted approach to redevelopment that incorporates economic, environmental and cultural sustainability, could we conceive self-contained sustainable communities of the future.

This article is contributed by Rahul Kadri, Partner and Principal Architect, IMK Architects