12 murals that show street art is taking over Indian cities

Street artists today are reshaping several cultural festivals while art movements like St+ Art India are campaigning country-wide to get street art a degree of respectability it deserves. We bring you 12 such stunning street art murals that are rejuvenating Indian cities and show the swift rise of s 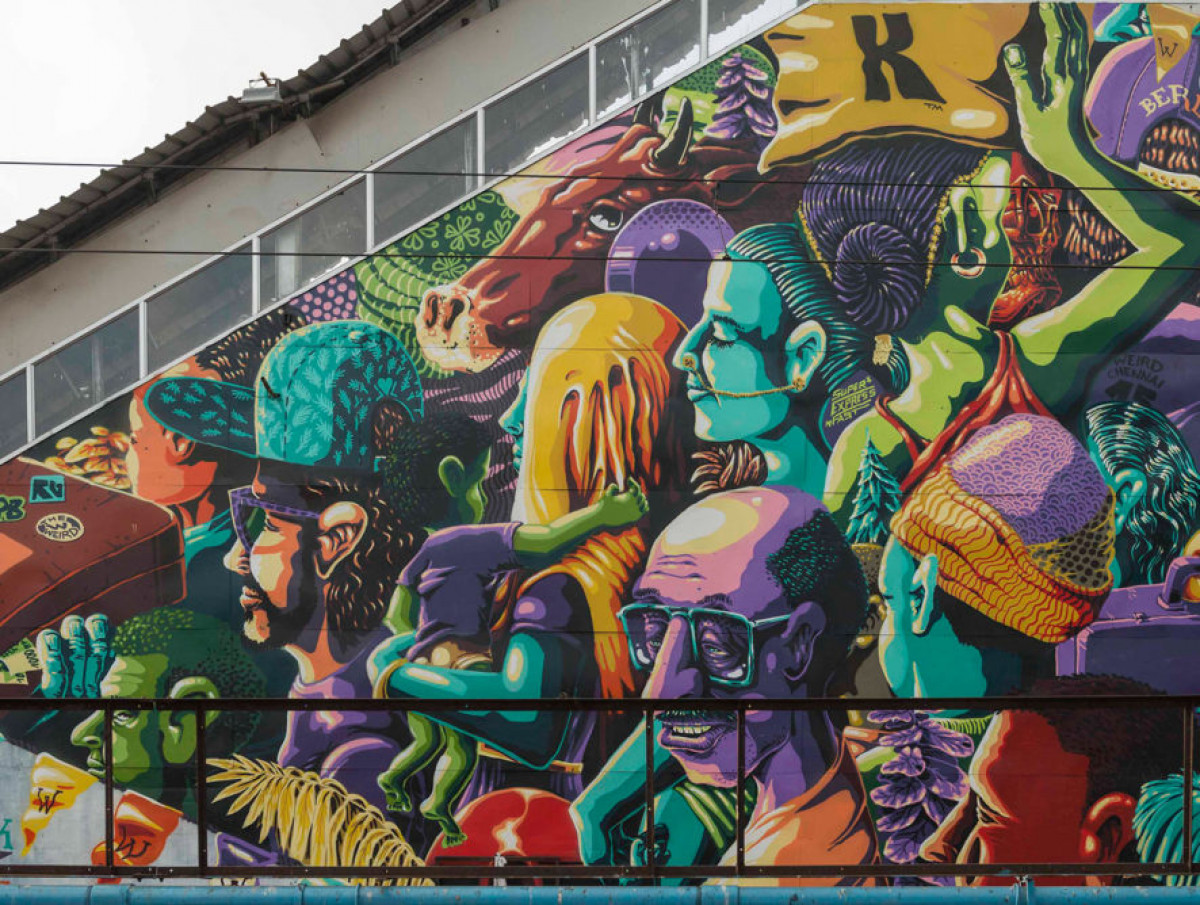 12 murals that show street art is taking over Indian cities

Street art in India is slowly changing the way we view art from the elusive nature of art galleries to a much wider platform with a broader audience. While Street Art always existed in India, this cultural movement has only now started getting popular in India and is quickly transforming the landscapes of urban India to join other international cities like New York, Hong Kong, Berlin, and Melbourne.

Only about a decade ago, graffiti and street art recalled the rebellious. Today, these street artists are reshaping several cultural festivals while art movements like St+ Art India are campaigning country-wide to get street art the degree of respectability it deserves. We bring you 12 such stunning street art murals that are rejuvenating Indian cities and show the swift rise of street art in India.

Late veteran painter, professor, sculptor and muralist KG Subramanyan paints an entire façade of Kala Bhavan’s painting department building in black and white. Interestingly, the Kala Bhavan, Santiniketan was a turning point in Subramanyan’s career. He painted this building at the age of 86. 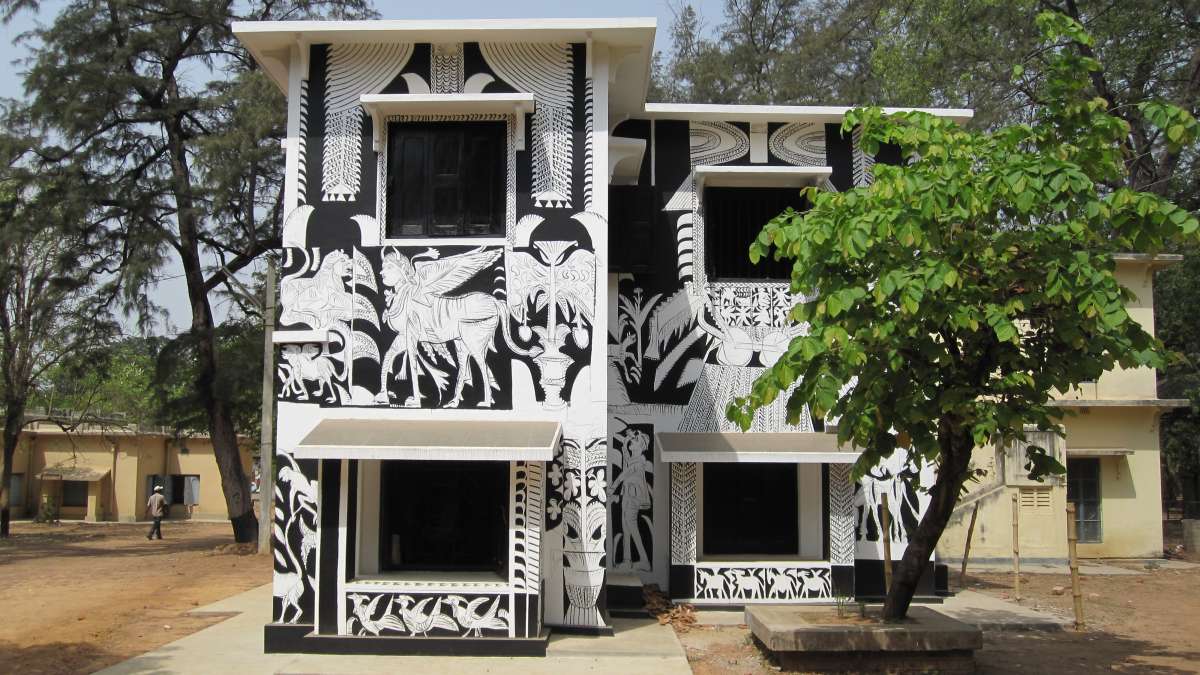 2. Unusual Usual by Do & Khatra at Makhta, Hyderabad

This mural comes after the duo observed the living style of old citizens in the area. This piece of a rickety man indeed evoked some reactions in the small neighbourhood in Hyderabad. 3. Aunt Rosy by Do and Khatra, Goa

The duo has created another mural in their signature style in Goa. Aunt Rosy is their representation of Goan culture. The inspiration again came from local living habits. Australian artist Guido Van Helten travels around the globe and creates works that are culturally relevant to the place he is working in. When in Goa, he met Theresa Wallace, an 82-year-old artisan who has been working with pottery for over 60 years. Wallace’s hands were the muse of this creation by Helten. Durga Pujo brings in the best out of this city. In 2017, artists decided to take the streets as they created a kilometre long Rangoli for the festival. And it sure did take the internet by storm. 6. A street art in the City of Joy, Kolkata 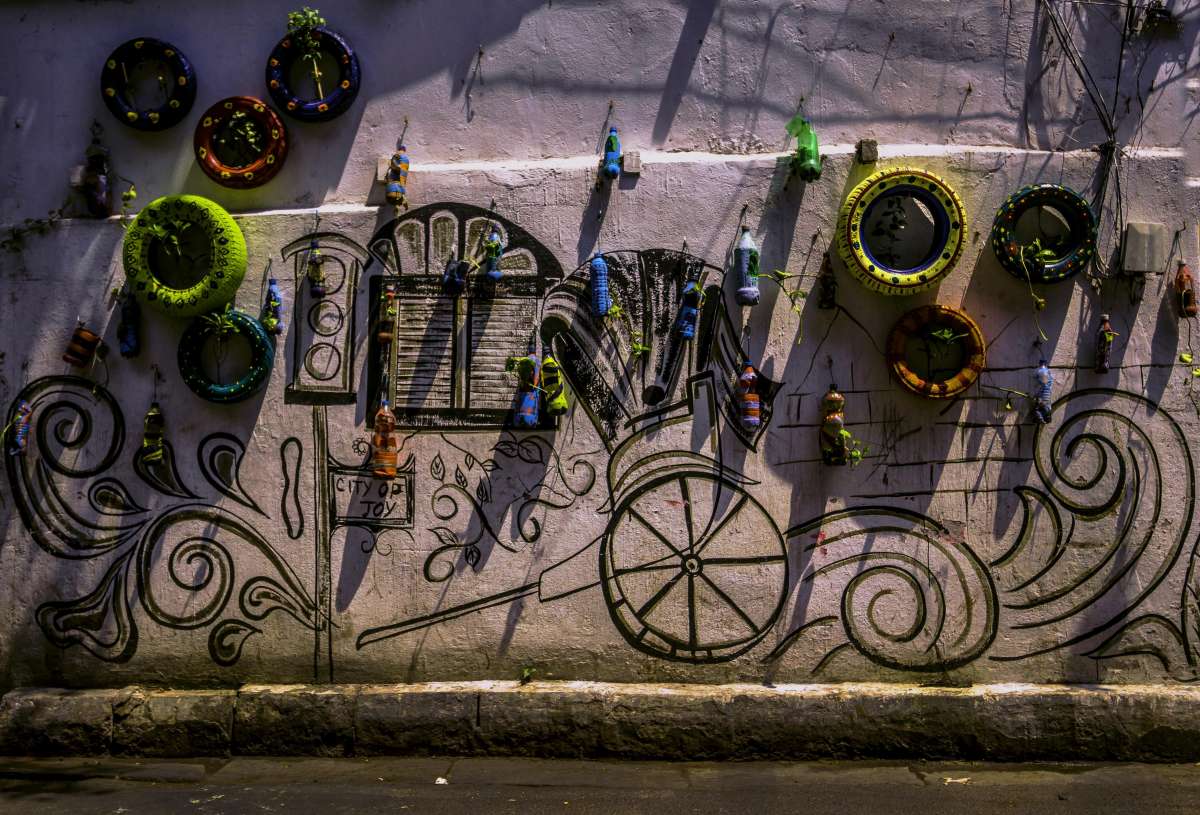 Kulavoor sees an acute need to celebrate the handmade in this technological world. This street art is a resurgence of the homemade, artisanal and DIY lifestyle. Kulavoor believes that the act of creating with his own hands is deeply human. In India the strategic advantage of our craft skills and the need to value, preserve and nurture local culture is obvious. ‘High Five!’ celebrates this uprising! 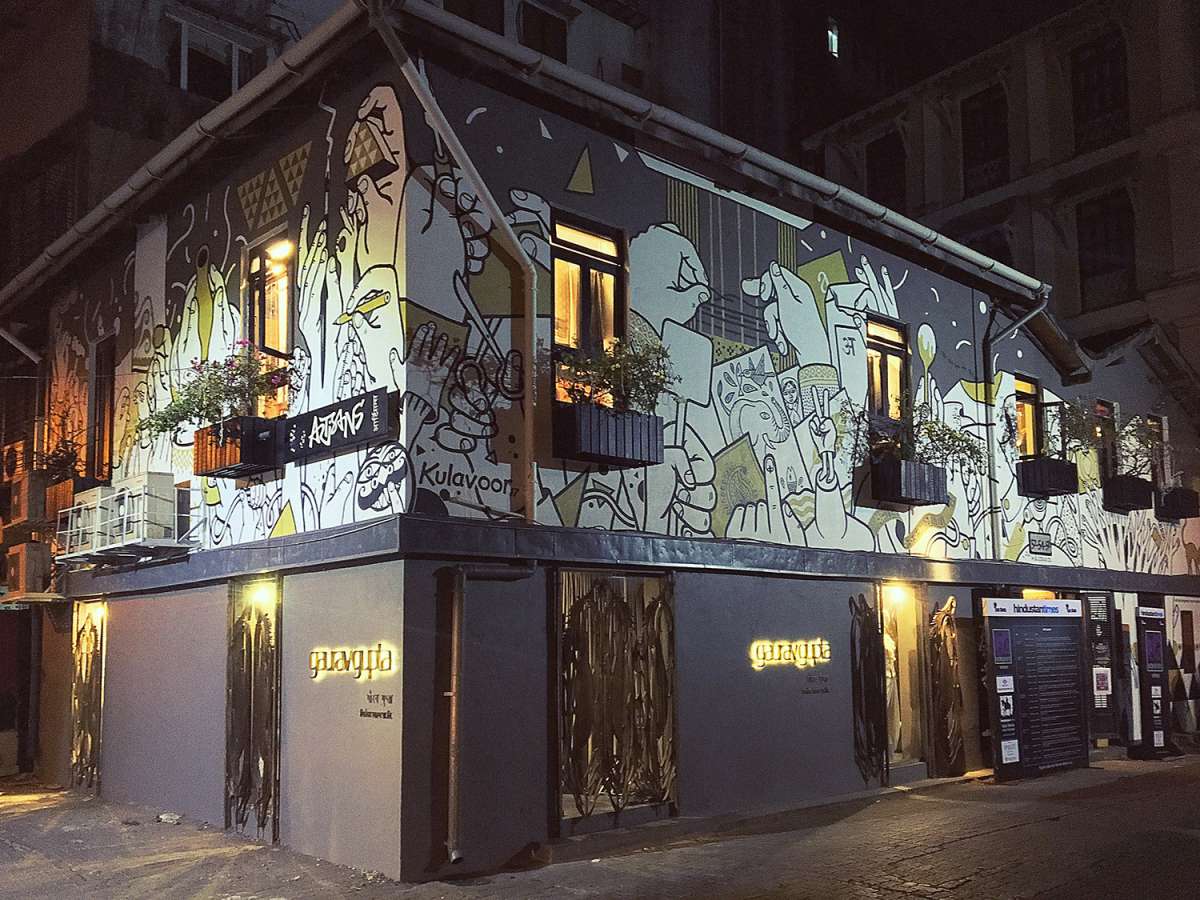 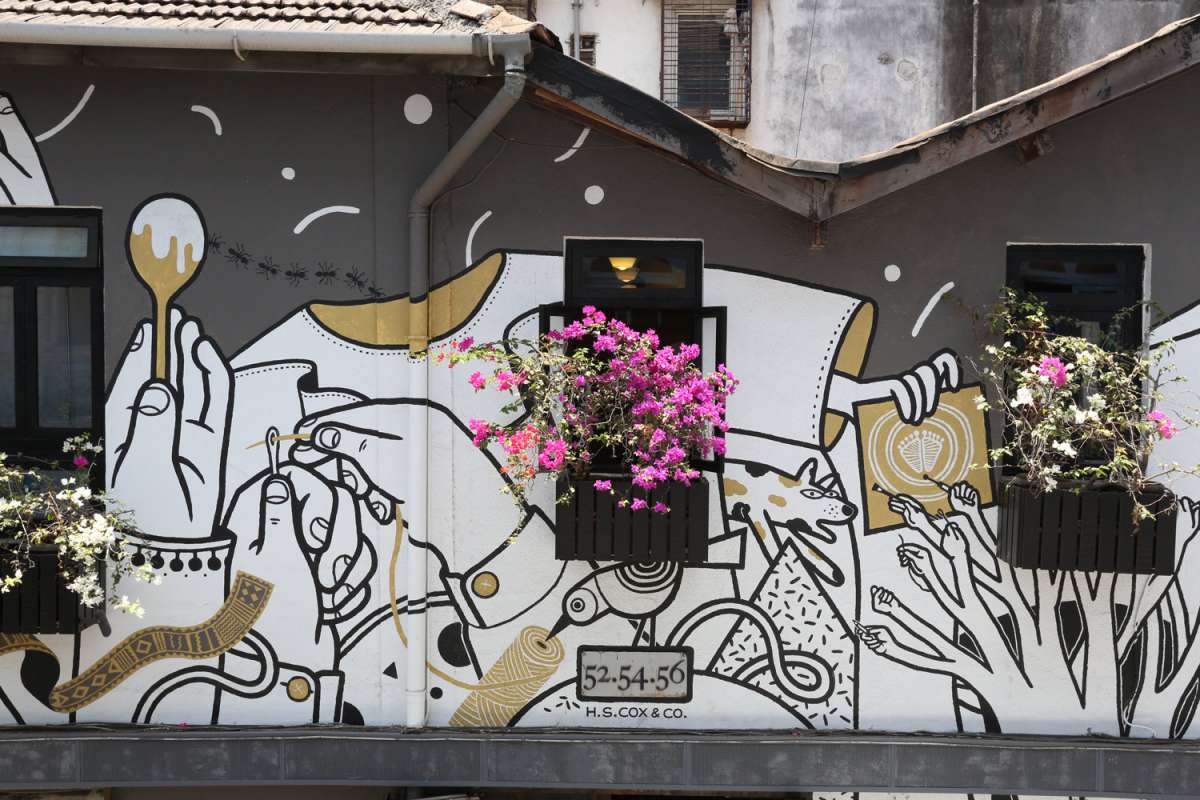 As part of its CSR activity, Viacom18 took it upon itself to help keep Mumbai ‘Chakachak.’ To start with, it painted a mural near its office with visual artist Rob to create one of the biggest canvases in Mumbai. The mural depicts garbage with messages like ‘Being Green is Staying Green’ and a pollution-free city. It features cartoon characters Motu Patlu, Milkha Singh and Priyanka Chopra as Mary Kom knocks out all the trash from the city. 9. Look The Wierd at Chennai Egmore 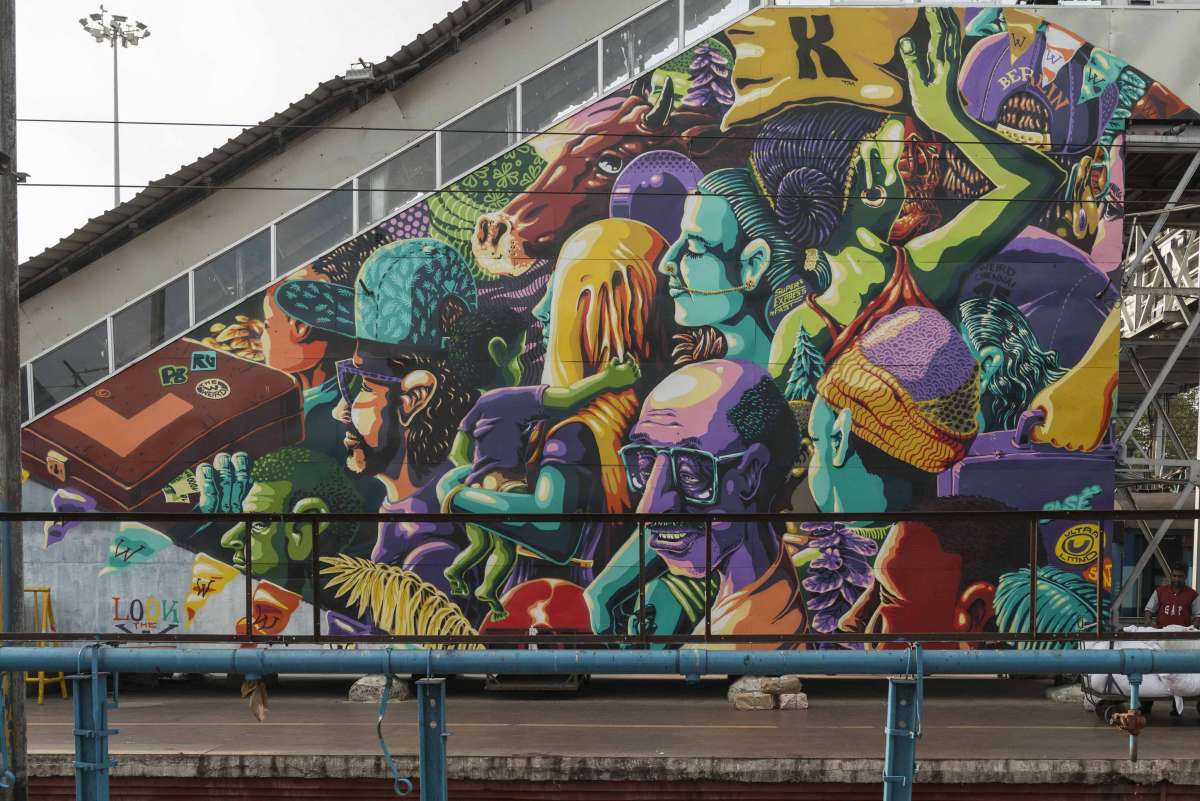 Dutch artist Daan Botlek transformed Palace Road using some clever street art. The series of blue and white figures only made sense when the mural was fully ready. 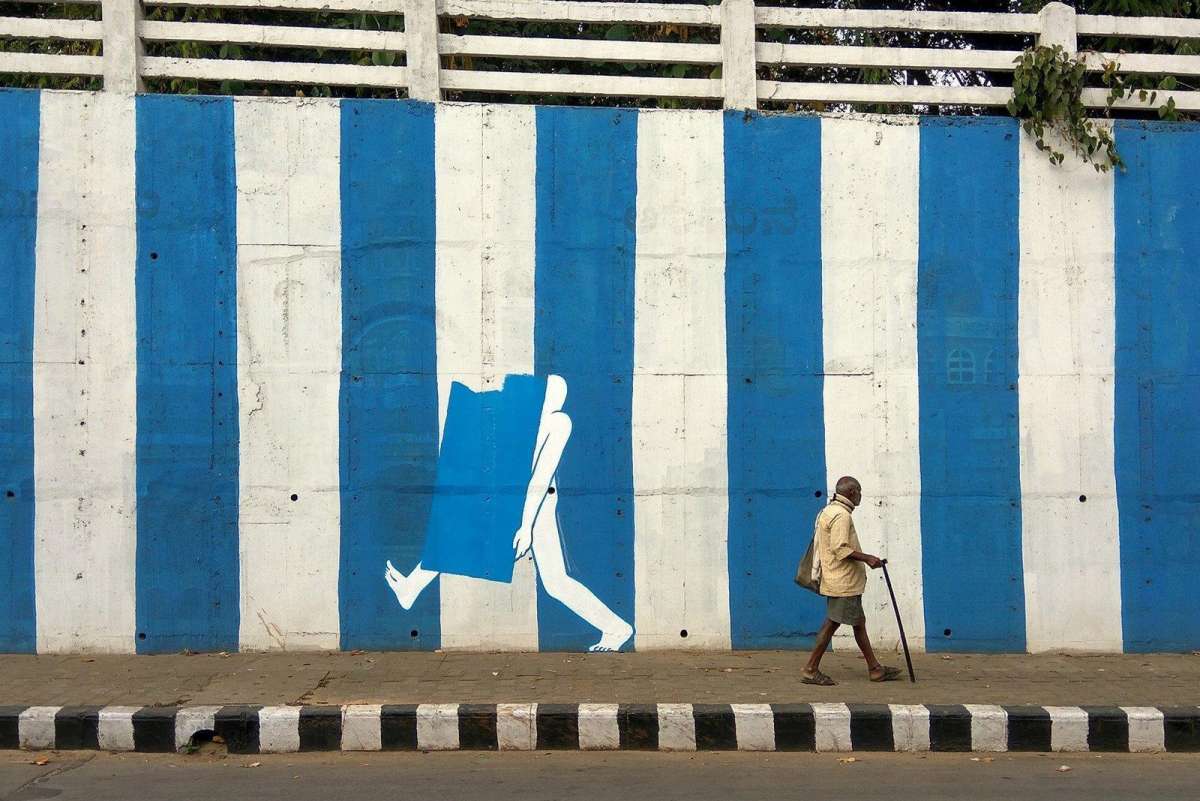 Street Art began in Delhi began with illustrations in this small neighbourhood. A walk through the street of colours has a message for all. 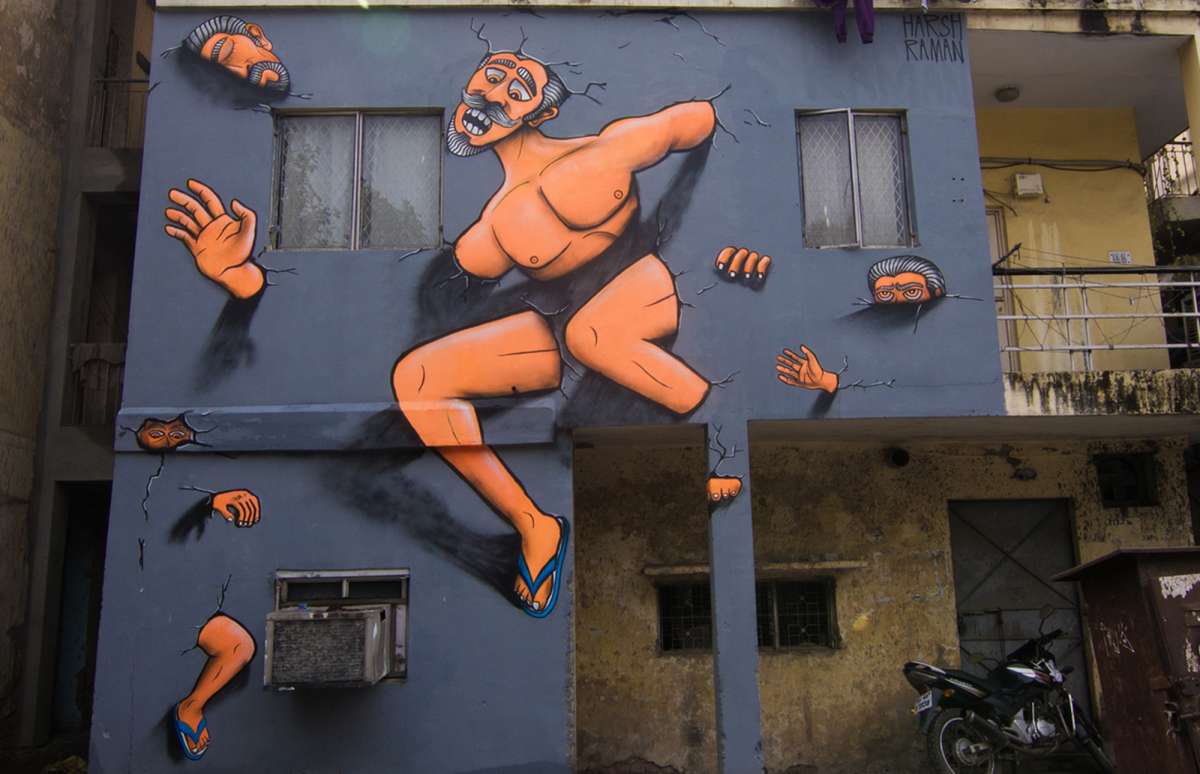 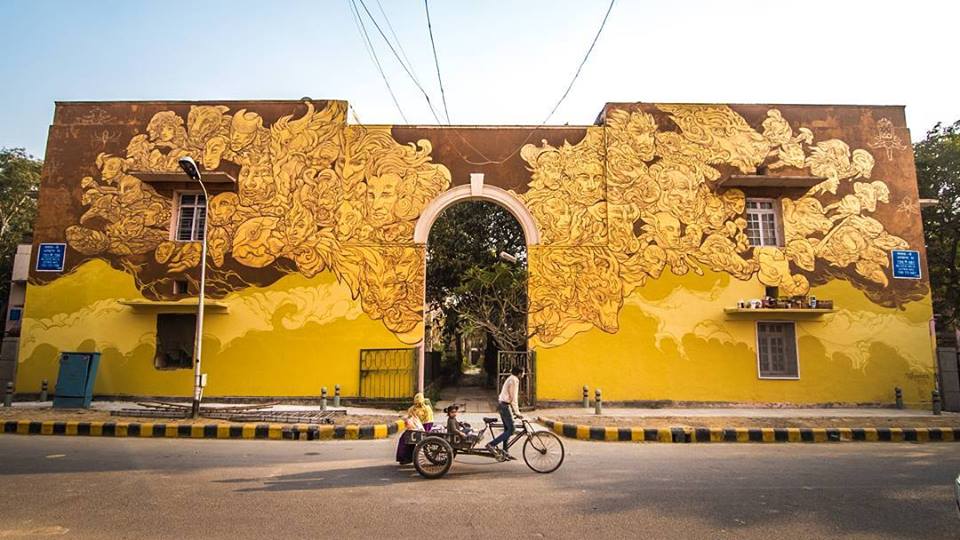 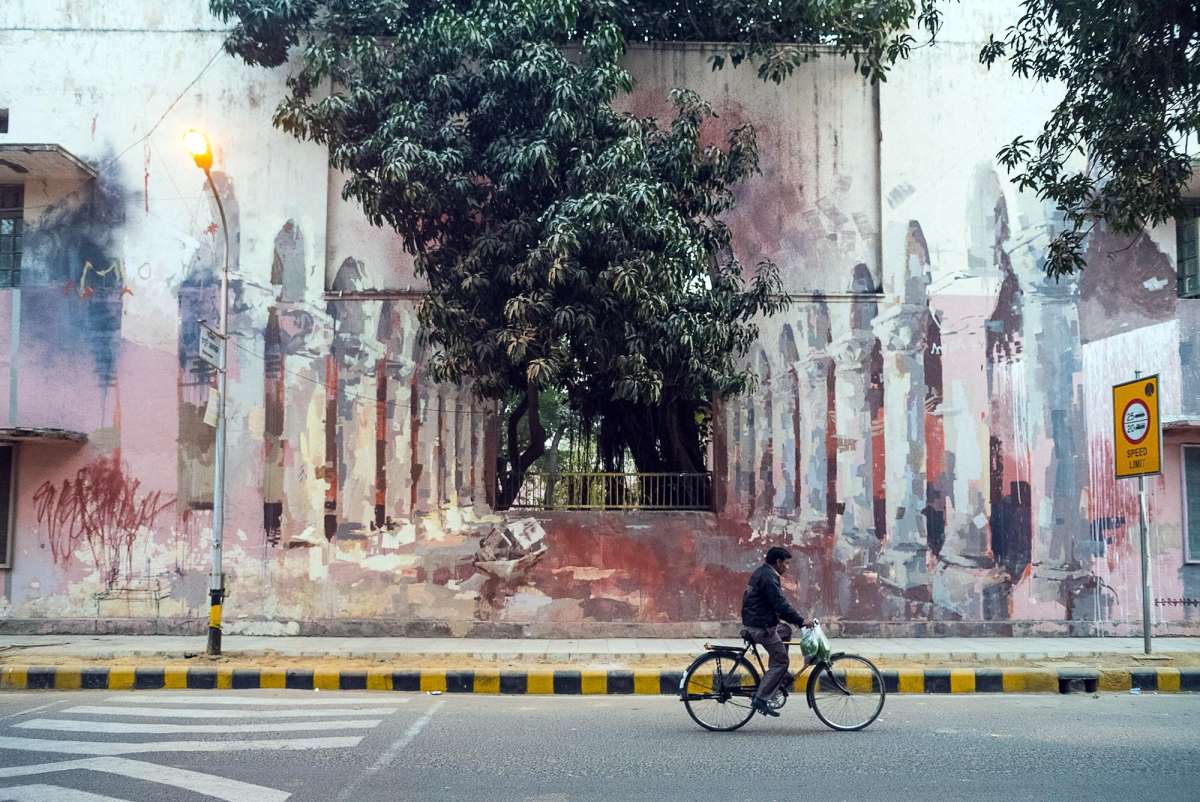